"Free Avatars" or Maybe Not

Acting on a tip from one of my friends the other day, I headed on over to the "Free Furry Avatar Warehouse" over in the Solbim sim (180,153,91). It's inside a large megaprim off of the main road and holds both a dance club (deserted, like 95% of clubs I see on the Grid, epecially on the mainland) and the "win zone", a place with a lot of Lucky Chairs and Midnight Mania boards. After flying in through the wall of the prim (directly below the pawprint showing the name of the place), I flew up to the second level where the "win zone" was, and was stopped by a wall --- you have to be a part of a group called "Anthropomorphism Therianthropy" and have the tag active before you can go into the Win Zone (or else be ejected from the area and deposited outside of the building).

"Well, that's not free, is it, if you have to do something like join a group to be eligible..." I said to myself. Still, that's not abnormal for SL, as many many groups give out free things to their members all of the time. 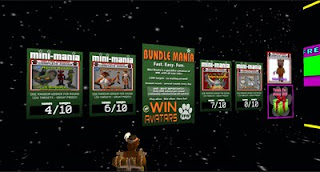 Using my camera to pan in, I saw several Lucky Chairs lined along the wall... then blinked to myself as I recognized the avatars. Avatars including the Crux, old equines by Avenity, and most of Wingless Emoto's avatars were available to win. These are avatars I remember paying $L for (1000 for my Crux, about 900 or so for one of my Avenity equines). These weren't "special" avatars available to members of the group, these were copied off of someone else's hard work and given out for free, depriving the makers of another sale.

Now normally, I'd be a bit annoyed about seeing copied avatars, but these are very old versions. I know that the maker of the Crux got out of the avatar making business because the Crux got copybotted in a big way (I do not know the details and I am reluctant to track down the creator for the whole story as I heard it is a very very painful story with way too much drama) and I think Wingless Emoto got out of the avatar making business as well due to "business problems" (I do not know the details). I found myself asking "Does anyone care?" I hardly see anyone wearing any of these old, old avatars. If anything, I see the occasional crux. Maybe some newbies are wandering around in Wingless Emoto's avatars. But other than that, I don't see many wearing these. I know Avenity updated their equines a while back, and these are not the updated versions, so it's not like they're "missed", I think. 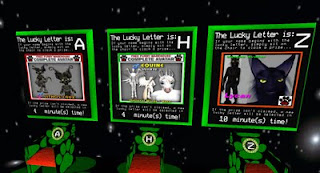 Still, they were copied off of someone's hard work. That's really a problem with Second Life. There really ISN'T a way to stop things from being copied and passed around. On top of that, after eight years of being on the internet, there can be only so many ways to make a horse head, or a lion avatar, and so on, and you're bound to get nearly-identical things from time to time. Those trying to build new things after so long on the Grid are running into that as a major problem ("If you go into this now trying to make money, you will fail." someone once told me, and I agree).

Then I noticed that the owner himself, Farthington Whetmore, was in the area. As my opinion is that people who stoop to copybotting are trolls of the worst order, it was time to test that hypothesis and see if he had any "remorse" about stealing. I asked him how he got the avs on the chairs, to be free to all, and his reply was that he got them from various places on the Grid, as well as them being full perms when he got them and that he thought it'd be fun to give them away to newbies searching the grid. I wanted to use our exact conversation, but "Due to the TOS issue and until I research more, I'd rather you didn't." Fair enough.

Still, "Just been" brought to his attention? The tip I got from my friend was about a week and a half old when I decided to act on it and visit the place. "Full perms"? I don't think they had full perms when they were first made. Yeah, my hackles are up, but I'm not going to pursue the matter further for now (mostly because if he IS a troll, I don't want retaliation or drama). I brought up the fact Avenity updated their horses, and it will be interesting to see if I return to the area in a few weeks to find the selfsame things put up on the Lucky Chairs. Given the nature of copybotters/trolls like that, I would not be surprised if my current appearance at the time (a "Verin" avatar out of the company called Derp) got slapped up there as well.

The real problem is that the damage has already been done and that these things are out there. This sort of grid-wide damage can't be undone simply by destroying the place. Linden Labs would fare better simply by saying "What you make you make at your own risk" and leaving it at that, but even being that honest would damn -them- in a way as well and they would lose a LOT of players because that's what Second Life was founded on: The ability to build or make/be anything you wanted.

I doubt I'll return to the "free furry avatar warehouse." I know of -several- places that I can get free things from; this is just yet another place on the grid that does it.