Marianne McCann is a resident of Bay City.  She also organize and run the Bay City Alliance, a group for other Bay City residents to meet and work together to the betterment of the community.  Marianne also had the great, good fortune of being able to help manage and present events for Bay City for several years now.  As long as the folks feel that Marianne is doing a good job, as long as she physically can, and as long as Second Life and Bay City exists, she will continue doing that.

Marianne hopes that Bay City has many more years to come.  “It's a great community with some great people in it. I hope we'll see more good folks become its citizens, and we'll continue to have fun long into the future..” said Marianne. 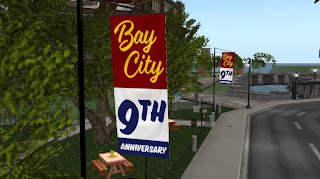 “Bay City is a unique little slice of the Second Life mainland. It's about 24 residential regions and about the same number of Linden Lab owned ones, decorated by the LDPW "Moles." It's loosely themed to the American Urban Experience, circa 1945-1965, with a distinct art deco influence. Unlike much of the mainland, Bay City has developed a strong community of folks who have sought to make the place all that more special.” said Marianne.

Marianne would say that Bay City is a very special place because it's a great blend of people and places, all seemingly working in concert.  It makes Marianne happy to see.

Bay City will have large events just about monthly.  Most are concerts, or at least have a musical components.  They can take many forms.  For an example, February “Mole day” event honors the LPWD, and their work helping to build Bay City.  In the holidays, they have a “Tree Lighting” event that includes charitable giving and live music, etc. They also have two weekly events.  Their meetings happen every Tuesday, while a weekly “rumble” race happens Thursday nights.  Toward the end of September, they usually have their Oktoberfest.  Oktoberfest is a Germanic tradition.  All big beer-focused, harvest-time event.  Oktoberfest is usually a couple hours long, with Djed music and much celebrating. Details are, as yet, pending.

Marianne would recommend Bay City to newcomers who come to Second Life for the first time.  “It's a great place to sightsee and explore, with a lot of mole and resident made content with visiting.” said Marianne.  “It's a good place and a great community.” 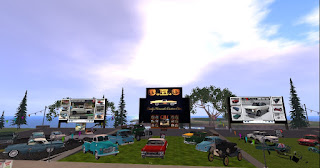 I got a chance to ask Marianne about "Hot Bay City Nights".  Marianne said, "Well, the "Hot Bay City Nights" event is designed to be a vintage car show and sale, focusing on the Bay City "theme era" of 1945-1965. We will bring in vendors to show their cars at the fairgrounds. We also have a couple other events at the same time: car washes to support Child's Play Charity, and the "Miss Bay City" pageant."

The first "Hot Bay City Nights" was in 2012.  The name is a take-off on "Hot August Nights", an annual vintage/custom car show in Reno, Nevada.

As long as the folks are interested and Linden Lab keeps the lights on, then Marianne suspects that they will keep doing it. 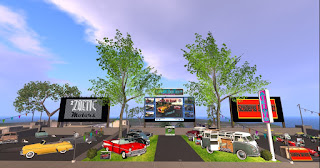 "Well, it's a group effort. This year it was primarily ran by Maureen Boccaccio and ADudeNamed Anthony, in that they did much of the decor, arranged for the vendors, and organized a lot of other details. I was also part of the planning and set up. Meanwhile, Evola Courtois managed our charity car wash, GoSpeed Racer DJed Miss Bay City, and Pygar Bu emceed Miss Bay City. So it's really done by a number of us around town." said Marianne when asked about people in charge of "Hot Bay City Nights".

Sounds like I have missed out on the fun but there is always next year and I'm already looking forward to the next event!