Virtual artist Bryn Oh recently completed the third part of her “Rabbicorn” story: “Standby.” Like "The Rabicorn" last year, it is made up of a series of displays of sculptures, each with a poem describing it’s part of the story. 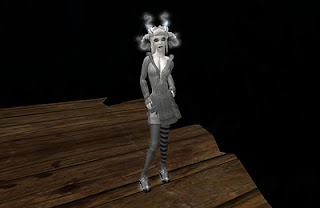 “Standby is the third and final part to the Rabbicorn story,” Bryn wrote in a notecard,”I strongly suggest you watch these two machinima if you are unfamiliar with the story. Better yet would be to go through the builds themselves. I have put both the Rabbicorn story and the Daughter of Gears physical builds on Immersiva, (202, 146, 1151). I have also written up both on my blog where you can watch the machinima if you prefer to do it that way.”

Also in the notecard, Bryn Oh described herself as “a metaverse artist who is meant to exist only online. She is a concept, a pixel character who inhabits the virtual world of Second Life. The idea is to see if a virtual identity can succeed within the real world of flesh and blood artists.” Her blog describes the real-life artist as a Toronto oil painter. 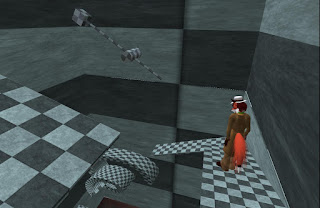 I went to the location of the Standby exhibit, the entrance leading to an abandoned theater. Getting past that, I ran into the introduction of Standby, and found Bryn there, chatting with a few friends who came by. “The whole presentation is fantastic,” she was told, “Thank you for putting it together. I loved it very much.” She turned to me after some time with her friends, “This is my final part to the story,” she told me. I asked her if she planned this while doing the earlier Rabbicorn story, or did it come after? “No,” she told me, “this was all planned a few years ago when I did the ‘Daughter of Gears.’ “ She explained building all of the displays, “took about two months and ... 14,996 prims. The poems took a few months as well ... This is a special build for me. I wanted to be sure it was exactly how I wanted it.”

“Artistically, it is the most advanced,” Bryn explained, “and uses most of the unique traits of Second Life as an art medium. The scope of it is far more than anything i have done before. It began in 2008, where most of my builds are generally one-offs, though they are connected to this story but satelite builds.” 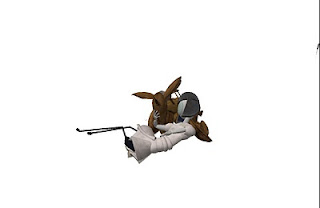 The story, through the exhibits, describes the Daughter of Gears and the Rabicorn, the best of friends, going out to to explore. Each one has a teleport to the next., progressing the story. The final scenes are a touching show of friendship.


.: I fell in love one afternoon
.: and wrote your name on a white balloon
.: I set it free to fly above
.: and dreamt it was a flying dove


Well-detailed, the exhibition can only be described as must-see by those interested in the art scene in Second Life.

A swirling vortex of textures, colors and shapes danced before him, teasing him with a semblance of order and familiarity, before morphing once again into a jumbled mass of code in search of form. “Still rezzing,” a familiar voice reassured him, “give it a minute.”

Slowly, the spectrum of visualizations began making sense. First a house…then a yard…a dog in the backyard slowly came into focus. “I hate this lag!” He shouted, but did not type. Something though became oddly familiar to him; the station wagon in the driveway, the open wheat field across the street, standing sentinel between the neighborhood and the major interstate visible a half mile away. Then, like an unprepared boxer taking one full force to the gut, it hit him. He spoke underneath his breath, not sure who he was asking, “I’m home?”

“I know this house. It’s...my…home.” His voiced trailed off. He’s sat unmoving – stunned - as if having seen and felt a ghost of a long dead friend brushing past him, disbelieving with his mind what was obvious to his eyes. The entire neighborhood – the one he grew up in - slowly materializing in front of him, with the clarity and detail of a high-resolution perfectly preserved digital image, but with life, movement and increasing emotion.

His boyhood friends, calling his name, riding their bikes in the street in front of the lower-middle class home in which he, his younger brother and three sisters grew up. Details long ago forgotten appeared exactly as he had once known them to be; the untrimmed hedge in front of his bedroom window, the large red-painted wooden fence at the side of the house that he would often rappel from; the shed, rusty and near collapse in the backyard slowly squeaking at the suggestion of each lovely summer’s breeze, and the majestic Pecan tree, towering over the home of his childhood - exactly…exactly, as it was years ago. “But, it’s impossible,” he whispers. “Welcome home, John. It’s good to see you again,” his older sister’s comforting voice again came through his earphones. He shuddered with emotion.

She continued to sob violently in front of her laptop screen. A torrent of salty tears spilling across her face. Her husband rushed across the room towards her, expecting to find some horrific detail in an email from her sister, or something so utterly and globally tragic in the news that would cause this kind of devastating emotional reaction from his wife. He wasn’t expecting what he saw on her screen. He stared…in disbelief. Seconds passed, then he uttered, “Turn it off.” “Baby, just turn it off…”

“No! Don’t touch it!” her shaking voice shattering the stillness of their quiet evening, enough to wake the children. “It’s her!” “Oh my God, Allen…it’s Mom.” He saw it too, frozen at the sight of the frighteningly accurate and lifelike image of her mother, dead now 5 years, but…alive now, on the computer screen and looking directly at them. Shifting her gaze, as if with consciousness from her daughter to her son-in-law, and then back again; she stared past the computer screen, fixing her gaze upon her daughter. Her mother’s eyes now – as they always were - full of life, joy, glistening, blinking, looking with seemingly genuine emotion at her daughter, who continued to weep. “Jeannine… it’s me, Princess. It’s me…” the avatar whispered.

Across the globe, people are having very similar, emotionally charged experiences. The catalyst: The new Memory Augmented Reality Module (M.A.R.M.), which became available in the U.S. just one week ago. Available only through licensed online virtual communities, including SL, the units and related software sell for approximately $1,500 U.S. per unit. The experiences promised and delivered have been nothing short of stunning, surpassing the hype and advertising, pushing demand far beyond the ability to manufacture the units and creating a backlog estimated to reach at least 6 months into the future.

The advances in what is now commonly referred to as “mind mapping,” via the science of Neuroinformatics, has finally bridged the divide between human brain memory, processes and analytical thinking and the technology utilized to structure and operate virtual and augmented realities. The first consumer driven application, M.A.R.M., despite the surrounding ethical controversy, has been nothing short of a cataclysmic event in the evolution of the human brain and its fusion with today’s technology.

Linden Lab, the pioneer in this newly christened M.A.R.M. technology, has been beta testing the software and equipment for nearly 2 years. While all publicly released findings of the clinical trials demonstrate the technology as being “safe” for the general population, the emotional impact and experiences being reported by some of its users appears to have been grossly underestimated, and the duration of the emotional side effects, misjudged. Sales of the units were recently halted due to reports from across the county of users experiencing anxiety disorders, generalized depression and conditions replicating PTSD (Post Traumatic Stress Disorder). These reports notwithstanding, demand for the units continues to grow almost exponentially, with backorders in the tens of thousands.

The most recent and tragic incident involved Seattle, WA resident, Nora Taylor, a 38 year old mother of three, who after completing the 24-hour mind mapping base-line process, began to utilize the M.A.R.M. device to recreate her childhood environments, friends and family. These simulations being made possible by importing the memory data mined, cataloged and translated into readable code into the SL data base, where a personalized region was then created based on these inputs.

The ensuing 36 hours for Nora Taylor can only be described as heartrending, as she rekindled old friendships, and reunited with relatives long since deceased, “losing herself,” as described by her husband, Jeff Taylor, “within the virtual recreation of her past life.” Upon returning from a business trip, finding their children uncared for and unfed, and his wife in a coma-like nirvana, Jeff promptly phoned 911 for emergency assistance. While the children have since fully recovered, sadly Nora Taylor died 2 days later while suffering from psychiatrically-induced catatonia.

Dr. Alred Russo with the National Institute of Mental Health, NIHM, stated that in extreme cases, involving already unstable, highly emotional or hypersensitive individuals, a real danger may in fact exist. “The virtual recreation of past real-life environments, and the sight of highly detailed recreations (avatars) of friends and family created via the improved 3-D imagery of SL, can be overpoweringly real, particularly when combined with the strength of real life memories and emotions.” He goes on, “The users’ brain can become so overwhelmed with sensory and emotional stimuli, that this virtual world and real life can become indistinguishable.”

Sales of M.A.R.M. products are expected to resume by next week – albeit with revised warnings and cautions. M.A.R.M. software and hardware may be purchased directly from Linden Lab, the official vendor of the M.A.R.M. Experience © in Second Life.

Posted by Bixyl Shuftan at 8:38 AM No comments:

SL Poetry - Intimate Moments and Thoughts of Us

A time to lay together
when comfort envelops us
like a soft, warm blanket.
The times are few and far between
but we relish them
like good food or fine wine.

Such hope laced with
trepidation;
such joy laced with
fear...
The joy courts uncertainty,
The fear carries sorrow.

And one day
The dam will break,
and every hope, dream and fear I have
will go crashing downstream
as rapids over jagged rock
magnificent in their freedom
and the truth will be revealed.

Shellie Sands
Posted by Bixyl Shuftan at 6:08 PM No comments: