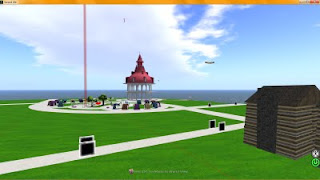 Bronyville was up for only a few scant months before it went down, and went down hard. All signs point to Bronyville (and its co-existing sim, Derpy) being lost forever with the removal of the original owners (Overbrain Unplugged and Twinkie Swizzle), the latter of which I did an interview with while things were finishing up being built. Krypton Radio is reporting at http://kryptonradio.com/2011/07/21/woodbury-banned-a-third-time-sl-bronies-take-a-hit/ that both Overbrain and Twinkie were "ban evasion" alts of trolls/griefers, real troublemakers against Linden Lab.

I talked to a few people, and they seemed to be in agreement. In the eyes of Linden Lab, "once a griefer, always a griefer" --- meaning if these two straightened up and "went legit" on their ban-evasion accounts, they'd still get in trouble if caught no matter how many good deeds they did (such as building Bronyville, getting people interested in SL BECAUSE of Bronyville, etc).

Then I got wind that the Bronies were recovering at a new sim raised by donation money, known as Bronytown (the sim next to that, Everfree Forest, I am not sure of if that is part of the new Brony sims or not). I tracked down one of the bronies who offered an interview, and they had this to say: 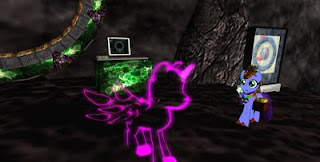 [12:19] Xymbers Slade: Ok, so what can you tell me about the massive avalanche that went on with Bronyville? I've been hearing a lot of reports of different things, from an admin coup to an admin troll.

[12:20] Magenta Stars: Well, I think it was the troll. I had heard rumors, but never really made the connection myself. That Overbrain was a Troll ALT was surprising

[12:21] Magenta Stars: I've seen coups before, they're never so clean or quick as this was.

[12:23] Magenta Stars whispers: I had a plot in Derpy that still had three weeks rent on it, and I was on the waiting list for a merchant stall. They told me I could open for business when the Arena was finished. 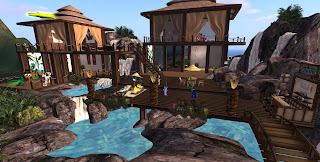 [12:24] Xymbers Slade: Are you going to grab a stall or plot on the new sims? Do you think the same thing will happen, that trolls disguised as "good people" will wreck things?

[12:26] Magenta Stars: Yea! And will I worry? No. Even if i know the leaders are trolls elsewhere. Trolls don't bother me, being a furry in SL makes you have to grow a thick skin, lol.

[12:27] Xymbers Slade: Thicker than most, at any rate. Do you think this was the intention of the trolls... to build everything up and to get their "lulz" later on, knowing it would come crashing down?

[12:28] Magenta Stars: No. I don't, maybe they got some lulz out of it, maybe not. But you know they invested some significant cash into the two sims. I think it was the genuine article. Maybe I'm nieve, but I like to hope for the best =^.^= mews Happily =^.^=

[12:29] Xymbers Slade: I'd seen at the meeting where the sim was going to be named... between the bouts of noise spam from those outside, it looked like [Another Brony], who I thought was a driving force, was basically ostracized.

[12:31] Magenta Stars: I'm not sure, by the time I came in, Bronyville was largely formed and Derpy was only weeks away. [Another Brony] seemed to me to be a quiet type. Hope he's doing well, I havent' heard from him since this all started.

[12:32] Xymbers Slade: I think that's all the questions I can think of... thanks for your perspective. I remember interviewing Twinkie for my first article on the Bronies... hard to believe that he (according to other sources) was a troll alt as well.


I'm expecting more troll attacks in the future. I know that much of /b/ had declared the Bronies "cancer" (they did tell them to go get their own board, which they did at ponychan.net) and they like nothing more than trolling something as "innocent" as a kids show aimed at little girls. When something this popular rebounds this quickly in the face of the trolls, it just turns into too tempting a target. I didn't lose much from my little plot when Bronyville went down (other than a couple of no-copy freebie water jugs from years ago), but I'm not going to buy another plot for rebuilding my store... not until I see things are solid and stable and hopefully troll free. I'm sure Brony Town when finished will be a nice place to visit, but I'm not going to live there.

Editor's note: Reading the Krypton article, I noticed the name connected to the alt "Overbrain Unpluged" was a familiar one: Intlibber Brautigan. Sorry to say the SLN veterans in Second Life Newser are all too acquainted with him.
Posted by Bixyl Shuftan at 6:00 AM