"How Does Your Club Choose Its Themes?" 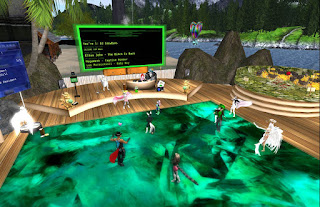 This is a question we hear once in a while, but not that often. Usually when we hear "How does that club choose it's themes?" it's a reference to some other club.

The Happy Vixen strives for a variety of events. But we also make an effort to talk on occasion to the DJs and hostesses for ideas. Over time, they've come with some great suggestions. We also take suggestions from you the fans. The majority, we (Snowy and I) come up with the themes for the next week every Monday night.

Our guidelines are not to repeat the same thing too often. So once we've had a theme, we usually wait at least two or three months before having it again. We keep track of what theme's we've done and when we last had them. Lately, we've also been making an effort to keep track of attendance to better help which themes are best liked. It's not perfect as some of our slots are outside "prime time" when not as many people are logged onto Second Life, but it does the job. Events with a lot of people are naturally more likely to repeated sooner.

As most of our regulars our furs, we often have avatar themes such as foxes and bunnies. Most weeks we have at least one color theme, such as Best in Red. Some any avatar can take part in such as Ears and Tails. Some are fun themes such as Videogames and Hollywood. Some are funny such as Tacky and Worst Superhero. Being a beach club, we occasionally have Swimwear and beach party, but we try not to overdo it. And some are on the teasing side such as Lingire and Cute & Sexy.

And we occasionally experiment. There have been times one event a week is a "Come As You Are" or CAYA. This saves those coming over from having to change outfits and avatars for one party.

A few months ago, we were asked by the community chief to help run a second club, "I want a bunny club." And so the same minds behind the Happy Vixen were tasked with the Bouncing Bunny Beach Club, with two weekly time slots moved from the Happy Vixen to there. So what does this mean as far as theme choices go?  Not much, although an event that appeared in one club will occasionally be at the other the next month.

We know some clubs have something only they do. Club Cutlass has it's Wednesday "Alphabet" events. The Furry Fashion Lounge has it's Friday Late Night. We've heard of others having "Topless Tuesday" parties every week. What's special about us? Well, we try to be not just the beach club of the Sunweaver community, but a nice little place to relax and have fun in. And of course once the party is over, feel free to play a game or watch a movie.

Addition: I originally finished this article a few weeks ago, but delayed publishing it when real life stepped in. While I can no longer be at the events as often as I could (at least for now), I still help choose the themes.