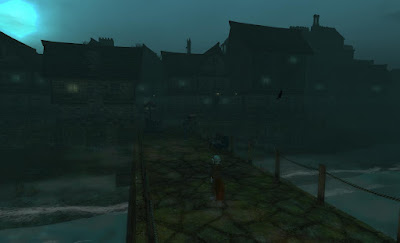 This Halloween season, there's a lot to see and explore. The Newser has reported a number with several articles (1) (2) (3), including Bellisseria's and Calas. This is just a small fraction of those around, 130 listed in the Destination Guide. But, we have time to list a few more. 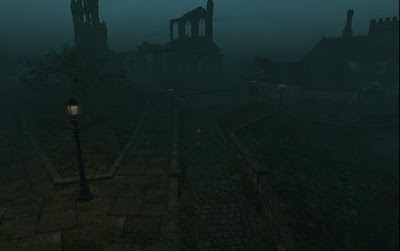 One place I checked out was "Whitby - Birth of Dracula." The Guide listed it as "This build by Hera (zee9) is based far more on the FF Coppola Movie than the book and is nothing much at all like reality. It also has a very strong Lovecraftian feel and is sort of English Innsmouth." 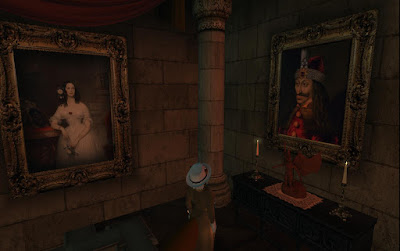 The entrance of the area was at the docks of a town. Walking inland, there were the runs of a church, and there was a manor that was well furnished, including a portrait of Vlad Dracula, whom was much bloodier than his fictional counterpart. 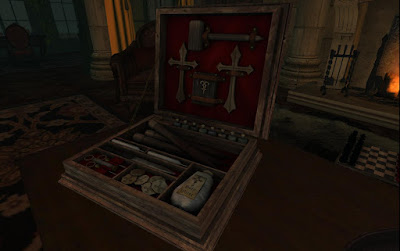 There was one other person at the manor dressed in a maid's outfit, possibly part of some kind of RP. I also saw a kind of vampire kit. Would it work against a bloodsucker? 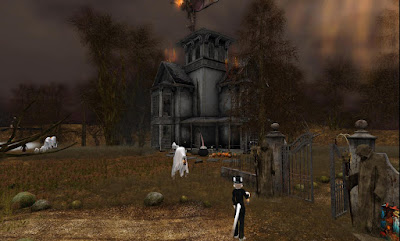 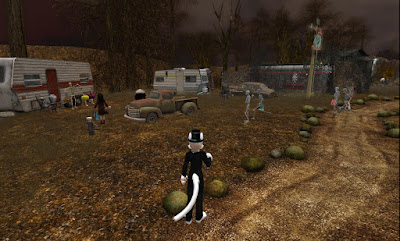 "Moody, ghostly, creepy and fun. Once a charming and peaceful spot in rural America, when the events began happening, folks moved away. No cars stopped at the motel; the farm lies abandoned. What happened here?" 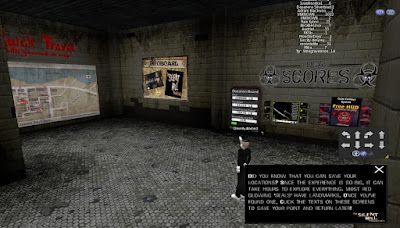 One scary place that's also an interactive adventure is "Silent Town: The Otherworld." It's located high above the Chief sim. While you could just explore, to get the full experience, get the Grim Combat System, and a weapon. 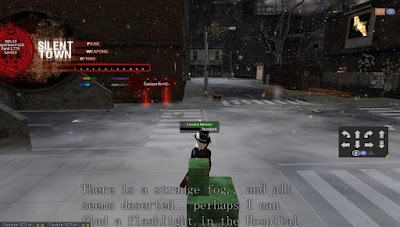 After getting the gear, go up and you'll find yourself in a spooky seemingly abandoned town. Right away, you get a thought on where to check out first. There, you should find a tool, and another clue. 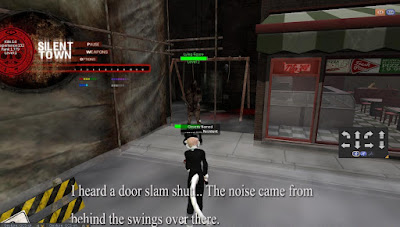 Unfortunately, you're not quite alone, having zombie dogs and walking undead to contend with. So keep that baseball bat or gun handy.

I haven't gone very far yet, but this game looks very interesting. Maybe soon we can have a more in-depth article about it. 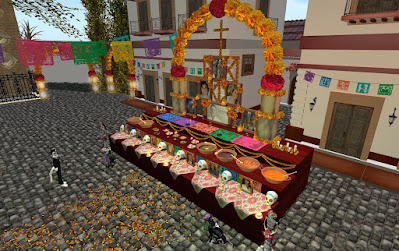 Besides Halloween, this is also the time Dia Los Muertos (Day of the Dead) takes place. This holiday is mainly celebrated in Mexico, though is also celebrated to a smaller extent in the United States and other countries. The dead are honored, but in less of a solemn and mournful tone and more of a happy, sometimes humorous one. It's not only for the deceased as the living share sugar skulls and mock epitaphs. 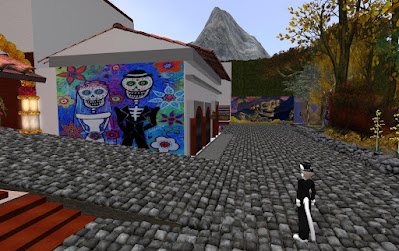 In the Instituto Espanol sim, there were some displays, and murals painted on the sides of buildings. 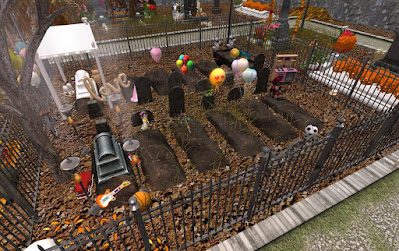 And the local cemetery was decorated with balloons and toys. 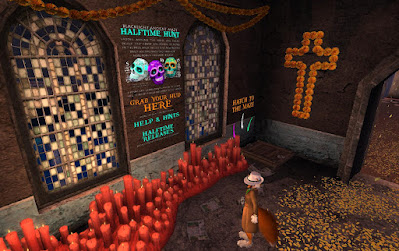 The Gacha Guild, or "The Guild" as they've renamed themselves, has adopted a "Day of the Dead" theme. And for their Halftime Hunt, one goes into a maze to look for sugar skulls. 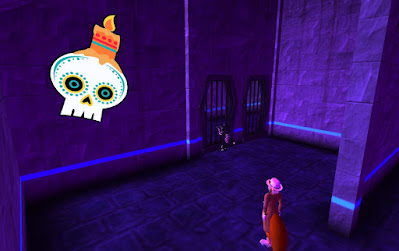 To play, get and wear the HUD, then go into the trap door leading to the maze. Then you navigate around, dealing with dead ends (pun intended) and the occasional trap. Thankfully death is temporary as you only get knocked back to a save point. Once you find a skull and click on it, you can't click on it again until the next day. 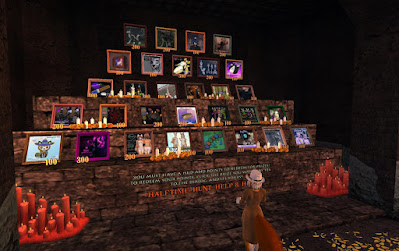 Finding the skulls are worth points, from 5 to 15 depending on how rare. The points can be used to spend on prizes. 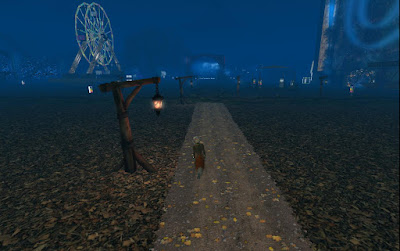 Also going on is the "Spooky Strides," taking place in a couple temporary sims south of American Cancer Society. 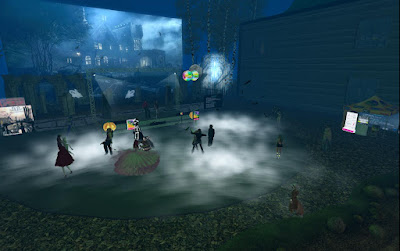 I dropped in on one event with live musician Harmonia Trefoil singing, with the audience in the middle of a spooky fog. 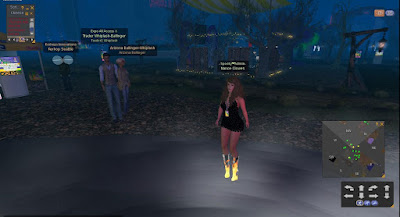 Also there was Nance Clowes, Trader Whiplash, and Arizona Ballinger.

Making Strides is a Relay for Life fundraiser, which raises money for the American Cancer Society. Keep an eye on the Relay for Life Volunteers Group in Second Life, or Discord, for times of events. 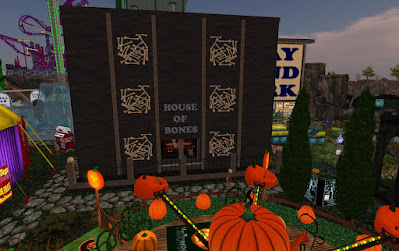 Playland Park at Viam Autem Sapientiae (110/135/3301) had a few Halloween-themed rides the new one was the "House of Bones." 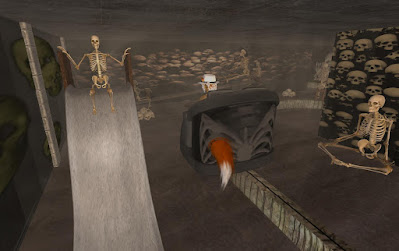 The ride had you going through catacombs filled with skulls and bones, with skeletons in various positions. 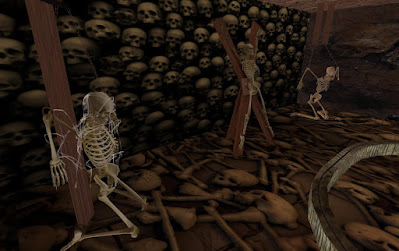 Celeste Cazenove really "boned up" her techniques when coming up with this ride.

I could go on and on, but then I wouldn't be able to finish this article in time for Halloween. Whether you chose to explore, have fun at parties, or both, have a Happy Halloween. 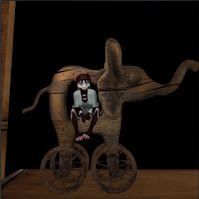 In fact, creating something clever,
that springs a songbird when you pull a lever,
with another human smiling, as its only purpose
is very human too, of course!
.....but so is being callous....
....and doing mean things out of malice -
letting your heart grow cold and coarse...

I want to be human on the sunny side,
and not to hurt and laugh when my victim cried.
It is not always an easy thing
to say words that does not hurt or sting.
To stand up for a stranger,
and help the stranger from misery and danger,
is a human good, that you can do -
because that stranger, is a human too.

Laura, trying to to be a good human.

There is a song that you can hear
but only with an open mind.
Built up by souls from far and near.
It is the song of human kind.

The music is both weak and strong -
Sung from New Yorkers to Achaeans.
Sung now, before, during eons.
It is the song about where we belong.

Take my hand and walk with me
along the path that life outlined!
Lets join the chorus, lets turn the key
and unleash the song of human kind.