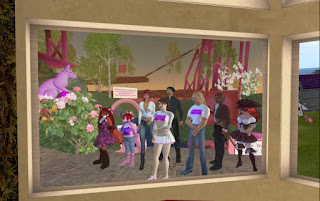 Cancer is a deadly disease. According to Wikipedia, almost nine million people a year around the world die from it. Striking down men and women, rich and poor, men and women, young and old, it takes away many individuals in the prime of their lives, leaving behind saddened family and friends. In Second Life, while avatars do not get cancer, the people behind them do. For the Relay for Life in Second Life, it's mission is to raise funds for research for cures and treatments has brought thousands to take part, from it's most active participants to those just stopping by to make a small donation. Sadly, along the way some of the Relayers have passed on. Catt Gable, Shady Fox, Alliez Mysterio and others would not survive their personal fight with the illness. 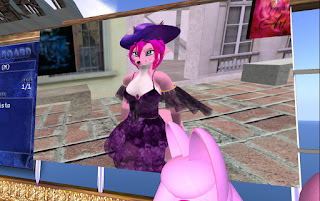 For the Sunweaver community and the Passionate Redheads RFL team in their early days, among their numbers was Artistic Fimicloud. In Second Life, she was known for her pink fox avatar. In real life she was Stephanie Koslow, an artist who did a number of pictures. Sadly, she also suffered from cancer, a struggle that had gone on for years. On May 26, 2008, the woman behind the little pink fox passed away at age 49, a sad day for both the Sunweaver community and it's team, and for the Relay.  Some days later, there was a memorial service in the Colorado sim. One artwork of her made since showed Stephanie's spirit rising from her body as her pink vixen avatar. "I Relay for Fimi" became a title seen on a number of the Redheads and others. Fimi's treehouse continues to remain up at the Sunweaver Estates at Sunweaver Bay (179/155/33). 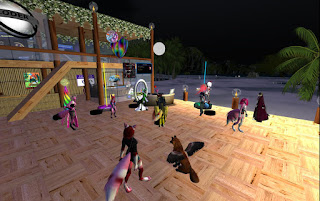 Since her passing, every year there has been an event of some kind in her honor. The following year there was a candlelight vigil, of which Ishtarkiss took a number of pictures of, as well as a "Blowout" event featuring art and screenshots. Beginning in 2010 (more pictures by Ishtarkiss), there have been memorial dances in Fimi's honor. This year was no exception, with the Happy Vixen and Club Cutlass running events on the week of her passing nine years before. 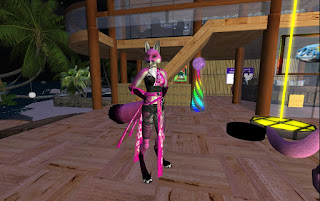 The Happy Vixen's event was at Tuesday May 23 6PM, with DJ Tantari at the booth. Several people wore pink outfits or pink avatars in Fimi's honor. Tantari had made a "Pink Fox" track just for these events, "The search for a cure goes on in her memory. Never give up! Never give in!" The track was a combination of fox-themed and other tunes, but ended with a somewhat sad song, "Goodbye" by Ulrich Schnauss. "After every journey, one has to say goodbye," Tantari concluded the track. 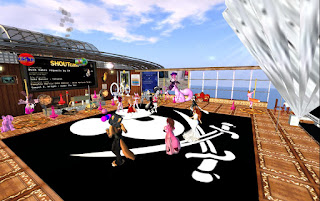 Club Cutlass would hold the larger of the two events on Friday May 26, the ninth anniversary of Fimi's departure. The event was also at 6PM. Sabine McGettigan, the longtime leader of the Passionate Redheads team, was among those at the tribute. Also there was Sunbeamer team captain Rita Mariner, Dusk Griswold, and Shockwave Yareach whom also knew Fimi. Once again, many showed up in pink avatars, pink outfits, or both. On the wall was a picture of Fimi, and on the floor one of the pink fox statuettes that represent her. 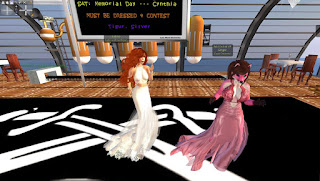 In the nine years since Fimi left us, much has changed with both the Relay and the community and team she was part of. Some have left, and others who never had the chance to know her, including myself, have come in. The Passionate Redheads team would fold and become a part of Relay history as a top-ranking team to the end, it's members of the Sunweaver community forming a new team: the Sunbeamers. 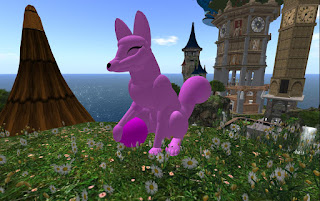 People continue to suffer and die from cancer. And there have been a few conspiracy theorists whom wonder if there is some kind of plot behind the scenes by the powerful of Capitalist and Communist and Islamist lands to keep a cure from ever being found, or that a cure has been found but the medical community is so fearful of quackery it will not accept anything more than strictly conventional medicine. But most of us realize the struggle to cure cancer is a more difficult one than getting to the moon. With that, we knew where to go and it was a matter of building a big enough rocket with the means to get a team there safely and back. Finding a cure for cancer has proven more difficult as it's not just one but a multitude of diseases with a multitude of causes. But every fundraising event, every dollar donated, whether to the Relay for Life or a number of other reputable charities such as the Susan G. Komen Foundation, brings us closer to a day when a cure for the last form of cancer has been found.

In the meantime, in and out of Second Life, people will continue to help, with time, money, and in my case a pen.