Aries (3/21–4/19) 6 of Cups ("Same old, Same old..."), upside down Ace of Cups (Overturned holy grail), 2 of Swords (Black and White Choice): You're running on fumes; when faced with upcoming tough choices simply pick the lesser of two evils and otherwise just -get some rest-.

Leo (7/23–8/22) Upside down 3 of Cups (Bad or negative luck), 7 of Pentacles (Stored resources) and the Lovers (Intimate connections): Relationships shouldn't go wrong, but they likely will and it will be out of your control. Don't fight it, you've got enough "stored potential" to outlast Murphy -and- his damned Law.

Sagittarius (11/22–12/21) Upside down 2 of Pentacles (The unhappy jester, living a lie), upside down 9 of Cups (all that glitters, and some things that do, ain't gold), upside down Queen of Cups (Someone focused only on themselves): Someone you care about is holding you down. Cut them loose before you get dragged down further; know when it's time to call it quits.

Taurus (4/20–5/20) Upside down 4 of Pentacles (selfishness), The Lovers (personal connections), and the King of Swords (dangerous threat): Someone who doesn't bend with the wind will instead snap like a twig in a storm. Be careful what you say and how you say it as people will be so singleminded as to refuse to "agree to disagree".

Virgo (8/23–9/22) Upside down Justice (Time for Karma), upside down 9 of Wands (barriers and walls) and an upside down King of Cups (The emotional game-player): People who have done you wrong will get what is coming to them, but not without some feedback to you. Don't worry about the backlash, this has been a long time in coming.

Capricorn (12/22–1/19) Upside down Ace of Cups (Overturned holy grail), Queen of Cups (Strong emotional allies) and an upside down Knight of Swords (Tripping over one's feet): Good intentions, bad outcome. Conclusions you jump to may be right, but the obvious "fix" isn't the correct fix. Try approaching a problem from an unusual 75-degree angle.

Gemini (5/21–6/21) Page of Pentacles (Overeager friend), Knight of Cups (Said friend with a good heart) and King of Cups (Someone who listens): If you have allies and big dreams, use the former to achieve the latter, quickly! Now is the time to act on those big dreams. It won't be cheap, but it will be cheaper than normal.

Libra (9/23–10/22) Upside down 10 of Cups (Incoming storm), the Devil (Dreams and reality are two different things) and an upside down 5 of Swords (War, conflict, physical harm): You're on far thinner ice with many explosive situations than you realize. Unless you like causing nuclear war, Back Off.

Aquarius (1/20–2/18) Upside down Knight of Pentacles (Personal greed), upside down Queen of Pentacles (wasteful and materialistic), and an upside down 10 of Cups (Trainwreck of a situation, incoming): The road to Hell is paved with gold. You can get rich quick, and get poorer quicker.

Cancer (6/22–7/22) Upside down Judgement (The final end of one situation, beginning of another), the 7 of Wands (fighting for every step), and an upside down 3 of Pentacles (the house of cards): You feel forced into climbing a mountain made of loose sand and looser stones. Sometimes the best game played is simply none at all.

Scorpio (10/23–11/21) Upside down 8 of Cups (Empty potential), 4 of Pentacles (Stubbornness), and the Queen of Wands (Established, but too by-the-book): Let others hold on to their ideals, even if those ideals can't be met. You may need to play the "What they don't know won't hurt them" card.

Pisces (2/19–3/20) Upside down Queen of Cups (Entitlement), the 2 of Wands (a safety net) and the 6 of Pentacles (communications): You've got it, but you don't know you've got it. Time to be more assertive than normal but remain aware of your limits; your "insurance" can't protect you forever.
Posted by Bixyl Shuftan at 6:00 AM No comments:

Meanwhile, Back in Azeroth

Busy as I am in Second Life, I still find a little time in World of Warcraft. Especially since my residential area has it’s own guild there, in Lightbringer. Recently my namesake character finally reached Level 60, and with it a flying mount. Before “Cataclysm,” one would have to wait until Level 68, Cold Weather Flying wasn’t an option until Lvl 78, and only available at the city of Darlan deep in the interior of the continent of Northrend. And of course, you couldn’t fly in the “classic” continents of Kalimador and the Eastern Kingdoms.

Now, flight’s available just about everywhere, the exceptions being the starting Bloodelf and Draeani areas. For Northrend, the Cold Weather Flying skill is available at any flying trainer. The only problem is, for those near level 60 in Outland, and Levle 70 in Northrend, you need to be more careful where you land in certain areas. Touching down next to a foe several levels higher than you may not be a landing you can walk away from. 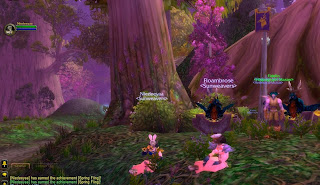 For a break in the questing, the Easter and Mothers’ Day events were an interesting diversion. For Easter there was Noblegarden, in which one gathered eggs hidden at the towns closest to capitals for the chocolates inside. There were also occasional goodies such as dresses and pet bunnies. The picture shows two Worgen girls from the Sunweaver guild munching on their candies.

Gather a number, and eventually one got turned into a bunny. Considering the wolflike Worgen player-characters are now involved, Noblegarden became a little more interesting. One of the achievements involved shaking a flower boquet at least one female of each player-character race. But with the neutral city of Darlan no longer the focus of the amount of traffic as it had before Cataclysm, finding girls of the opposing factions was a problem.

Some in the Sunweaver guild made Noblegarden into a social event, going to Azure Watch in the Draeani lands to get hidden eggs. Bu there were other ways. One of the Noble garden achievements is “Hard Boiled” in which one’s bunnified av lays an egg in the hot springs in the Un’Goro crater. In the Zangamarsh server, the “It Came From the Blog” guild, started by posters in the WoW Insiders newsblog, organized a “Hop to Hard Boiled.” In this spontaneous event, they and one other guild, and friends, didn’t fly but walked all the way from Razor Hill to the Un’Goro hot springs. They made this tape of the event, which is over an hour.

"The Hop to Hard Boiled" 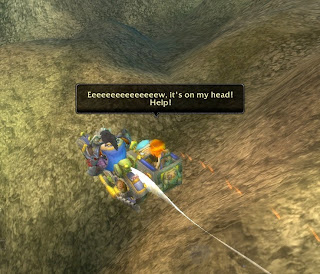 Just after Noblegarden was Childrens’ Week. With the changes from Cataclysm, the Ogrimmar and Stormwind quests for the event were changed as well. The Stormwind ones included a motorcycle ride in Westfall, including a pass at the crater and its slimes, which got a little close for comfort for the kid. Horde players had their own wild ride quest in the form of “Ridin the Rocketway” in the Goblin area Azshara.

Until Cataclysm, the Alliance was seen as less diverse than the Horde by many, some Horde dismissing them as “Humans, hippies (Night Elves), and short guys.” With this in mind, one wonders if the Stormwind orphanage matron is having some mixed feelings about trusting her kids to these huge werewolves. The kids would probably think it’s cool, “Doggy!”

Besides the events, Blizzard has also released a new WoW character pet, the cenarion hatchling, available for ten dollars. The proceeds from the sales go to the tsunami relief effort in Japan. Also, an article from WoW insider suggests WoW’s subscription levels have fallen back down to pre-Cataclysm levels. But at 11.4 million subscribers, it’s numbers still make it the 800 pound gorilla of MMOs. There's been at least one suggestion that Blizzard should take this as a sign that it should offer a Free-to-Pay option besides the 10 Day Trial. But it seems most feel the people behind the game are feeling little pressure to do so.

On a final note, with my namesake character being a hunter, I should bring up some recent changes to combat pets. When I first played hunters, one had to keep one’s pet happy. If it got too unhappy, it could run away, especially if it was a new pet. Later on, Blizzard changed the game so they didn’t run away. This was seen by most as favorable, as it was one less thing to worry about. Unhappy pets still didn’t fight as well, so one needed to keep food on hand for the pet.

Now, the rules have been changed so that pets no longer get happy or unhappy, but just a level of content. Food is still handy as it heals damage on a pet. But still, not only does it remove the combat bonus the hunter’s pet gets from being happy, but from my point of view, it takes away from the experience of owning a pet, that it isn’t “just there” but needs occasional attention.

Well, that’s it for now from the wild world of Azeroth. Next holiday is the 4rth of July one, the Fire Festival, in which no doubt we’ll be seeing numerous guys and girls with maniacal grins as they chant “Burn! Burn! Burn!”

I was recently contacted by an old friend, Foxyfurman Kumaki, about a recent development in the virtual world Avination. As the estate owner in Second Life of the old Foxworth sim, he and Linden Labs got along less than well. Eventually, he and his partner moved to the mainland, getting a shop there (and paying only a tiny fraction what he once did).

He also decided to check out other virtual worlds, and soon found one he liked: Avination. “This was the first world that I could log into easily,” he told me earlier this year, “This is less money and more stable from my view.” Foxyfurman reported the number of sims back then as 800. More recent statistics of the Opensim based world show over 1100, with almost 26,000 members, almost 9000 whom logged in within the past month.

One thing Foxyfurman liked about Avination was the difference between it’s policy on gambling and that of Second Life. Because Linden Labs is based in the United States, it has to deal with the government’s less than friendly attitude with Internet gambling. A few years ago, Linden Labs banned all gambling in Second Life. Later on, it began allowing some games such as Zyngo, if a case could be made they involved some level of strategy. But there was at least one occasion Linden Labs changed the rules and ordered gaming halls to comply, or else.

“In Avination,” Foxyfurman told me, “it is straight up gambling. AVN is in the UK, so games of this type are semi-legal.” An article in VirWorld wrote about gambling there, describing a casino that was so big, his viewer couldn’t see it all.

Unfortunately, Avination’s relaxed policy on gambling got unwelcome attention from Paypal. Foxyfurman told me the reason Linden Lab had put the pressure on Zyngo halls earlier was because of Paypal, “Paypal is international, and they do not like it.” Avination had been using Paypal for it’s residents’ convenience. But because of the gaming, they were thinking of leaving, “it looks like AVN has few choices: ban gaming, or find a good and easy payment method.”

Some days later, Foxyfurman had some good news, sending me a notecard, with a message to AVN’s staff from Paypal:

Thank you for providing additional information
regarding your website/s and business in order
to comply with PayPal's Acceptable Use Policy.
After a recent review of your account, we have
found that you have completed the requirements
to remove the limitation and have granted an
appeal.

Furthermore we are glad to inform you that you
have been approved to use PayPal as a payment
option for your sales on the following website/s:
http://www.avination.com

So it seems the gaming halls are in Avination to stay.