My Alt And I : The Story of Bun Buns Bunsies 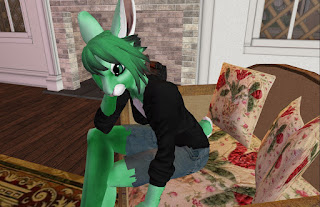 I would like to tell you the story of my alt.  Her name is Bun Buns, but in real life, her full name is Bun Buns Bunsies, my stuffed toy rabbit.  I have known her for about three years when I decided to create an alt account in her name.  Ever since then, I have brought Bun Buns to life here in Second Life.

It is true that whenever I have a chance to bring Bun Buns to Second Life, she will come hopping to life, greeting her best friends, especially Bixyl Shuftan whom she adopted as an uncle.  I did ask Bixyl if it is okay that he would be an uncle to Bun Buns, and he said yes.  I'm glad that Bixyl gave it a chance at being Bun Buns' uncle.

But the reason why I created Bun Buns to start with is that during that time, I lost the actual doll.  I was told in real life that because the doll looked dirty, I had to throw her out.  I did everything to make her stay with me longer, but it was time for her to go.  With sadness, I threw the stuffed bunny in the garbage, but not before I made sure I would get another one.  At that time, I didn't know how, but I was determined to get another Bun Buns.

Sometimes later in real life, my two best friends surprised me with a new stuffed rabbit, which became the new Bun-Buns.  She is a green bunny, and is always in a good mood.  When I got the new doll, I immediately named her Bun Buns, and ever since then, she has been staying with me since.  Bun Buns the stuffed bunny would travel everywhere with me.  She is a small rabbit who could fit into my backpack with no problem.

I thought on the day I created the new alt account in Bun Buns' name, that it would means that Bun Buns would go on Second Life with me.  True enough, sometimes at night time, Bun Buns would come out into my living room here with me, and we'd have a talk with Bixyl as well as few other people. Among them, Bixyl's own alt Rezzdammit, whom has his own story about how he came to be here.

No, I don't regret making an alt account in Buns' name.  In fact, I'm glad that I got a chance to bring my favorite rabbit to Second Life.

This is the story of how my alt, Bun Buns, came to life here on Second Life. 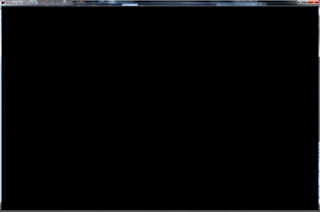 "Is it just me, or is there something wrong with Second Life?" That's been a question I've been asking myself this week. One of the places I go to regularly, there's not usually any problem and I can cam around and chat to my hearts content. But twice this week, things began to slow down and freeze up to the point the screen would turn black. A few times I had to close the viewer and restart. The crowd wasn't that particularly big, about a dozen people. I managed to get around it by focusing on just myself, or some corner of the place. But that wasn't much fun.

This was the buggiest time I've had since November when a "Unscheduled Maintenance" at the time caused people to be knocked off the grid. But checking the Grid Status Report, while there were some rolling restarts at the time, there wasn't anything out of the ordinary mentioned.

Chatting with friends, a few have been telling me they've been having troubles as well. One wondered if it was Linden Lab's moving things to "cloud" servers. Another wondered if it was someone's avatar, or the avatars of a few people, that was so resource-intensive, it slowed everyone else down, an issue I touched on last month.

Does the machine need replaced? It is a few years old. But friends of mine have been able to get by on machines much older. Plus I don't have a lot of money to spend. And I recall a friend of mine once got a new computer, and her performance on Second Life actually got worse.

In any event, the issue went away after a while. Hopefully it was just a fluke and the problem, whatever it was, won't show up again. At least not for a while. Glitches and bugs have always been a part of Second Life. So we learn to put up with them when they're small and occasional. It's when things get out of the ordinary when we notice.