Last month, Hamlet Au interviewed Black Dragon developer NiranV Dean about what the viewer maker felt was an underdiscussed cause of lag: avatars that use of a lot of resources to process. While it's no secret that the more avatars in an area, the worse the lag can get, some of the more popular mesh avatars are more taxing than others. He went as far as to state they used up far more processing power than characters in computer games. 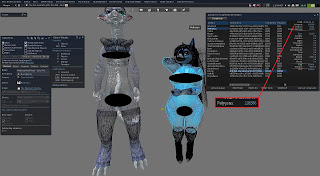 NiranV's solution, he felt, was for users to refuse to buy these polygon-heavy avatars, and to look for ones that have less. One example he gave was the Snokra Snake avatar, which used less then 28,000 polygons, which could be reduced to about 15,000, while "the Maitreya body without hands, feet and head has 125.000 triangles. Belleza has even more." Hamlet himself felt that on average makers of popular furry avatars had done a better job of making quality mesh avatars that didn't use massive ammounts of polygons than makers of popular human ones. 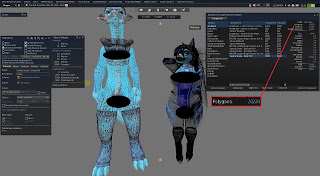 There was no shortage of comments, especially in response to the first article. Some readers stated that high quality/low impact human avatars did exist, including one made by a furry product designer. But not everyone was on board for looking for an alternative. There were comments that decent human avatars had to have all that complexity to look good. And one felt "the barn door is open and the horses are out," saying these high complexity models for better or worse had become the standard and not many would "willingly use what they perceive to be a frankly less-beautiful product." Cassie Middles had a video with tips on how to improve performance either when wearing one of the avatars in question or being around them.

Between the links, there are a lot of remarks in the comments, including a few insults when the debate got heated and a few Not Safe For Work pictures. There's much information and opinions, but what there isn't is a clear-cut solution that satisfies everyone.

Among my friends in Second Life, one is proud of her appearance, and if it uses up a few more resources fine with her. At one point, she complained about people "jellydolling" her and not voting for her in party contests because of it, though no comments about it lately. Others have also mentioned using Maiterya for their avatars. I've also talked a friend who commented his screen would lag like heck, until derendering one particular avatar, then his frame-rate per second would shoot up to 20 fps. One sim moderator told me she had to deal with complaints about one renter's horses which were getting the blame for the lag, when it was really high-detail avatars hanging around at the social spot.

What do you the readers think? Feel free to comment below (but no insults please).