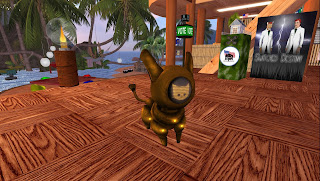 Editot's note: the picture is of the avatar in question at a club that is happy to have well-behaved visitors, regardless of appearance (as long as larger ones are careful where they step).
Posted by Bixyl Shuftan at 6:00 AM 15 comments: 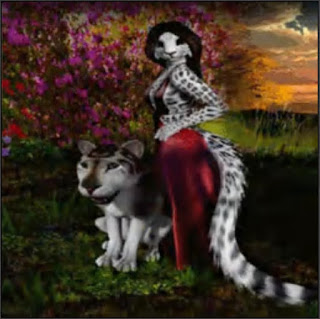 The sole purpose of this list is to help furries be able to explore Second Life without running into hostile receptions, including bans or being asked to leave because of their avatars. I understand that some owners may feel their restrictions are justified by a desire for historical accuracy, a certain ambience, or other reasons. The reasons for the restrictions are irrelevant and I do not pass judgment on them. I only note that they exist. However, because I do not want to reward these policies or encourage harassment or other bad behavior, I will not provide landmarks to their locations.

I have reviewed the TOS and this list appears to be completely legal. However, I want it to be very clear that this is ***not*** a list to be used for harassment, punishing, or otherwise acting badly. This is a list of places to avoid so that you don't get instantly ejected, banned, asked to leave, etc. No aggressive acts against any of these locations. If that becomes a problem, I will end this list.

The vendor, the list, and the script are copy and trans, but no mod. This way you can distribute copies of the list if you so desire. But the admonishment not to harass cannot be removed.

For questions, corrections, or to report other places that should be on the list, contact Lia (female.winslet). If you are an owner whose location has been erroneously included, please contact me to let me know and I will correct the list.

This is a part of Frank's Place, which is one of the more well known anti-furry spots. Please see the entry for Frank's Place.

Club Texas
=======
The rules posted on the community forums include "No Furries."

Frank's Place
=========
Franks The Elites and Franks Place Jazz Club do not allow non-human avatars to use these facilities. You may be ejected and banned if your avatar has any "non-human" features (tails, cat ears, ect.).

Frank's also has a notable reputation for homophobia.

They put it right in their name. 'Nuff said.

House of FED
=========
From the place profile: FED Home of human only sadists and victims.

Isla de Amores
==========
From the place profile: Human avatars only. No children or furries.

Libentia
=====
From the place profile: Human avatars only. Exceptions; wings and mermaid and mermen.

Cocktail/evening dress only. Quadraped avatars are deemed not compliant with the dress code because quad avatars do not wear clothes, so quad avatars are asked to leave. Anthro furries are allowed. Since there are multiple clubs with similar names, to be clear, this one is a jazz club founded by Xaphyre.Ansar. Xaphyre.Ansar confirmed the policy and called it discrimination.

MacLeod's
=======
From the place profile: Human avatars only.

Playa Perdida
=========
According to their place profile "Adult human avatars only[.]"

Ritz New York City
============
Club owner says furries are "a problem" and not welcome at her venue. This is a venue created specially for RFL fund raising and RFL official policy does not tolerate this type of discrimination. Current status is unclear.

Tranquil Tiki Island
============
From the place profile: "Human avatars only and no weapons allowed."

Editor's Note: There was a small miscommunication with Lia when she handed me the list, I thinking she intended this for publication. As it turned out, she didn't. But she was okay with it.
Posted by Bixyl Shuftan at 6:00 AM 4 comments: