News and Commentary: More on The Trump Wall

While many come to Second Life to escape debates of issues in real life, others see it as a method of discussing them. Of the latter, different people react differently to opposing points of view. Some respectfully disagree and concentrate on getting their own message across. Others try to engage in debate. But sometimes different people have different ideas about what the rules of such debates should be.

Eight years ago in 2008, interest in US politics grew as an incumbent President was in his last year of office, and both parties fielded candidates about who would take his place. During the primaries, several headquarters were set up by supporters. Eventually, three centers of political debate arose: the GOP Cafe for conservatives, Cafe Wellstone for the liberals, and Capitol Hill as an officially neutral location. Between the first two, and other political themed locations, there were close-minded individuals who showed up just to vent and demonize, as well as outright griefers, and more or less levelheaded individuals whom more more interested in dialogue. But for the most part, they left each other alone. The most active night politically that year was of course Election Night 2008.

Eight years later, it's a much different kind of Presidential Election as one candidate has succeeded while breaking so many unwritten rules. And in Second Life, there is no longer an mutual agreement for the two sides to leave each other alone, at least the two most vocal camps of the political supporters. 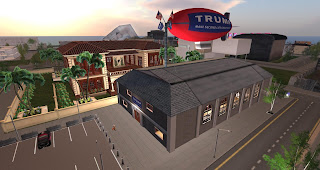 In late March 2016, JP Laszlo, a supporter of candidate Donald Trump built the "Trump Manor." Intended as both a private residence for her and a few friends as well as showing off her support for the Republican outsider politician, she found the place the subject of no shortage of attention, getting the attention of media from within and outside Second Life, including the Newser. However, it also got the attention of griefers, leading her to install a security system that limited access, and caused a little confusion. About the same time, Macaria Wind built the "Bernie Sanders Second Life Headquarters" to help inform others about the outsider candidate for the Democrats. Although griefers were a problem as well, her reaction was to boot them when she came across them, but keep the place open. 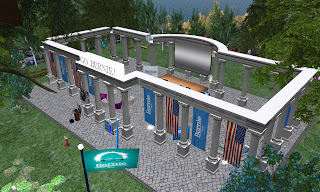 In response to the attention, JP Laszlo with the help of friends built the Trump HQ, Here, anyone could walk in and talk. JP and her group reserved the right to ban those they saw as griefers, but when I talked to her did say they managed to win some over to their side.  But this wasn't all that happened. Others in her group bought up some land next to the Sanders HQ, and erected a huge wall that towered over it. As one of Trump's repeated promises is to build a border wall between the US and Mexico, one couldn't help but make a comparison. But the wall was more like a tower as people could easily fly or teleport around it. Plastered with US flags and campaign signs, the top had a picture that taunted Macaria Wind and her supporters, "We have twenty times more traffic! I keep winning! You can't stump the Trump!"

When I invited her to talk about the wall, Macaria stated she was busy, but did sent me a notecard.She had this to say about the structure: 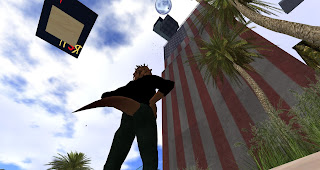 As for the Trump Wall, there is not much to say. It is on a rented parcel and was apparently set up to serve as an annoyance to me and other Bernie supporters. One of my group members said when he clicked on the sign on the wall to go to Trump HQ, it tried to take over his av - he suggested it wanted to install a virus. Several Bernie group members have been to Trump's HQ and reported hearing racial slurs, vulgar language and, in general, hate speech. Several Trump supporters have griefed us here at HQ while others have come just to check it out and still others have visited and had intelligent conversations with our group members. So, it does, indeed, take all kinds...

While I aspire to an attitude of compassion and kindness, I also say "to each his own". I believe in karma, what goes around comes around and we reap what we sow. Though it is absolutely, without doubt, essential to be aware of the evil around us, I believe it is not helpful to focus on it, therefore, I treat the wall the same way I treat Trump's campaign - I mostly ignore it.


The claim that the wall can spread viruses is false. The only method in which Second Life users have caught malware through their viewers is the media stream. JP Laszlo, whom now has the display name "JP Trump," explained it was a way to teleport oneself to the Trump HQ, "It's an experience request, for an experience based scripted teleport: http://wiki.secondlife.com/wiki/LlTeleportAgent . Standard Second Life stuff." 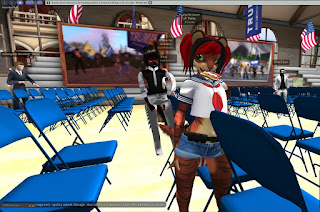 JP and I talked on a couple occasions, once at the Trump Headquarters, and once after I spotted her hovering near the top of the Trump Wall. At the HQ, "she" spoke in Voice, revealing "herself" as male behind the computer, now sporting a furred female look rather than the anime girl she had earlier, with a "big smiley face" armband. The place had quite a crowd, some speaking in voice, some in chat. The place was more of a hangout than a location where one could get information, though there was a media stream with one of his speeches and freebie hats. There were a number of pictures around, and a few props of gaming culture such as a Nintendo controller seat and a Pac-Man barbecue, JP saying just because (s)he and his/her friends were gamers was no reason not to take them seriously.

While I was there, there was no "racist" language or "hate speech," but a polite debate on the merits of the Sanders campaign and someone suggesting the two candidates, both of whom are considered outsiders, should cooperate. The closest thing to a griefing was some wag over Voice propositioning JP to a "yiff," which (s)he politely turned down.

Of the Trump Wall, (s)he stated it was done all in the name of fun, "It's friendly banter you understand nothing serious. But Mac doesn't seem to have a sense of humor about it. She's banned me even though I've never even been to her land other than to stand there. ... We see this as a bit of fun, the wall I mean. They should lighten up and put some banter up themselves. We try to have a sense of humor."

In Voice, JP did mention something about someone else nearby trying pulling off a joke at their expense, though didn't seem to think too much of it. When I later looked, among the Trump HQ's neighbors was a plot that looked like a crude metal shelter cobbled together from a post-apocalyptic ruin, with signs proclaiming "Hadet for President." Who Hadet is, I don't know. 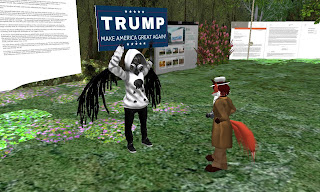 As it turns out, I've seen for myself Trump supporters at the Sanders HQ. One was simply flying around holding a banner, getting a little close to people. The other, whom went around holding a sign over his head, ranted about "stopping this cuckery." When I brought up the subject with JP, (s)he acknowledged there was a problem, but with both sides, "I am not responsible for every troll claiming to be a Trump supporter, just as she is not responsible for every troll claiming to be for Bernie. And believe me we've had lots."

Talking more with JP, (s)he stated no dislike for the Sanders campaign, saying there was much about the platform to be liked, "I'd love to be friends and have debates.  But they have other ideas, which is fine. Saddening but fine. ... We are not griefers. We are not trolls, just political activists with a sense of humor and fun. If (the) Sanders (supporters) bought a place across from me, I'd be delighted to engage in some back and forth with them." JP stated there should be a parcel opening up in Lionheart Ahadi near her soon, inviting Macwind or some other Democrat supporter to take it.

So it seems there's no animosity among JP's pro-Trump group towards MacWind's Sanders supporters, but rather a disagreement between the two groups about what the "rules of engagement" between the two should be. It could be reasoned the former feels they're doing the latter a favor by attracting attention to both places and groups. The Democrats would beg to differ, though. With the griefers, hitting the Sanders HQ, apparently they have trouble telling the difference between the two, possibly if they should try. MarcWind's use of the term "evil" does not bode well for the opinion of she and her friends towards the Trump supporters. Part of the divide may also be an age difference, MarcWind being an "An old hippie wanna-be/pseudo geek," and JP a gamer from a younger generation. Different generations can have very different experiences politics-wise while growing up. For the 1960s, the big issue was civil rights and Vietnam. For the 1980s, it was the Cold War. And for the 1990s, it was the "little blue dress."

For now, the Sanders group seems to be trying to ignore the Trump Wall, still within sight at their headquarters in Caspoli (45/37/46). What happens next will no doubt partially depend on how the election in real life goes. While Trump will most likely get the Republican nomination, there are whispers that the "establishment" will try and find a way to stop him, even if it costs the party the election. Sanders is currently a close number two  in pledged delegates for the Democrats, but a huge majority of the unpledged delegates support his opponent. The Trump and Sanders groups could be increasingly worried less about each other, and more about the campaigns they support. 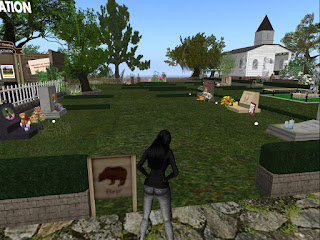 The final resting place for pets. That's what Peace Valley Pet Cemetery is all about. It welcomes pet owners with open arms.  Anyone who comes by the pet cemetery would surely be overtaken by the pure beauty of it.  The pet cemetery gives pet owners many options to choose from when it comes to saying good bye to their beloved pets.

When I first got to the Peace Valley Pet Cemetery, I was taken back by the beauty of it.  One of the thoughts that came was, "Wow, this is what we need - a beautiful pet cemetery".  It's not just the beauty of it, it's also that the pet cemetery welcomes people with open arms.  They also have a church. Flowers and trees are everywhere, helping to beautify the grounds.  Even the church stood out because of the natural beauty. So if anyone who loses a pet wants to find the right pet cemetery, I would recommend the Peace Valley because of its beauty. 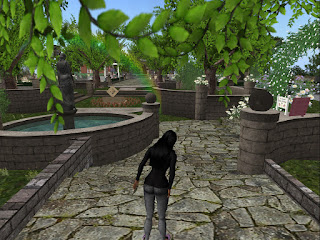 I can think of only a few words to describe it.  I can assure you that none of them are bad.  When I went to the Peace Valley Pet Cemetery, the thought was, "If I have a pet, and it passes, I would like to come to this pet cemetery to remember."  I don't say that too often because I'd like this to have a real reason to serve.

Peace Valley Cemetery is an ideal place for owners to come and say farewell to their beloved late companions.  When I was there, the beauty was overwhelming.  I would have recommended this place to anyone who lost their pets.  For them, this is indeed the place to be; an ideal resting place for departed pets.

Deaflegacy Darkbloom
Posted by Bixyl Shuftan at 6:00 AM No comments: 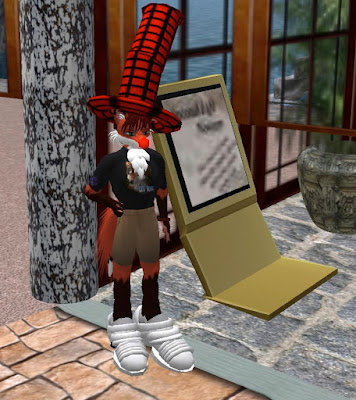 May yours be filled with joy, merriment, and general foolery.