When my sister, Becky "Sha" Shamen, began her reporting career at the SL Newser, her first article was about the continents in SL. While researching for the article, her scouting missions discovered two narrow water passages, between Nautilus and Corsica, and one from Corsica to Gaeta. Since the Blake Sea joined Nautilus and Satori, she claimed that the longest possible, one way journey, in SL, without using a teleport, would span the continents of Satori, Nautilus, Corsica and Gaeta. Rather than attempt the journey herself, she challenged her readers to become the first explorers, inworld, to take this epic adventure themselves. 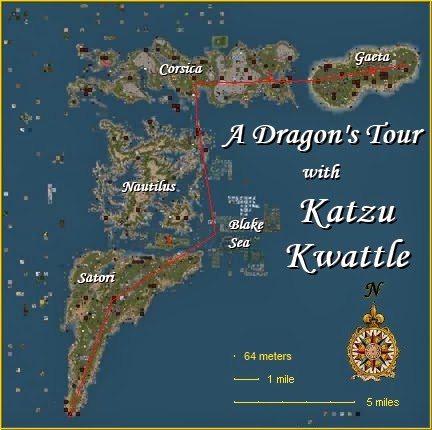 Now, more than seven months later, Joshua Xavier decides to take up the challenge. Knowing that this journey, at ground level, could not be done with a single means of transportation, because of rough terrain, water crossings and hundreds of sim crossings, he decides on air travel as the most efficient means of travel. Alas, planes and zeppelins are subject to destruction at sim crossings and could often get auto-returned, should he stop to explore sims along the way.

Luckily, Josh had just acquired a new SP Dragon Guardian avatar, named Katzu Kwattle. Unhampered by an external vehicle, Katzu would have an easier time crossing sims and making landings to rest or explore. His only challenges would come from dragon hunters and laggy sims. Like birds and planes, dragons tend to travel in straight lines. With this in mind, Josh gets a map of the four continents, gets out his straight edge and red pencil and lays out a course for Katzu to go by. The journey would start at the Southern tip of Satori, head NE to the Blake Sea, up the Eastern side of Nautilus, cross the Eastern water passage to Corsica, then East to Gaeta. The actual path and the time it took would not matter, as long as the beginning to end were travelled in an unbroken line. Zooming in on a single sim, on the map, Josh found it to measure 4 pixels square. From this he determined the length of one and five miles. From this, it was calculated that the planned journey would be about 25 miles.

Katzu began his journey on an abandoned isle in Yeeowler, at the southern tip of Satori. Little did he know, there would be countless more abandoned parcels and sims along the way. He begins by flying north, to get in from the coast, before turning NE to follow the flight plan. Soon, in the Bagheera sim, He spots Hwy. 8. Checking the map, he sees it follows the planned route, so uses it to guide his path. It seems like following the highways might be a good way to tour continents via land vehicle, until he comes to a large lake where the road stops at a "bridge out" sign. Following the highway works for several more sims, until it passes through a parcel which bans entry to those not on it's list. He finds his way around the area and back to the highway, but the problem keeps happening and it is often hard to find the highway again. He begins to get the impression that mainland inhabitants are not very friendly and welcoming to outsiders. Needing a better way to stay on course, he opens the world map and clicks on a spot, in the distance, which makes a red circle on the map which also shows on the radar and as a red arrow in the air as he flys. Now, each time he has to go around a parcel, the red arrow gets him back on course.

Katzu likes to fly at an altitude below 100m, so that he can enjoy the view and discover points of interest, but quickly discovers this generates it's own set of problems. As he flys, the changing scenery takes time to rez and if he flys too fast can be hit by things that are not seen yet. In one place, he found his progress halted as a building rezzed around him. Flying at higher altitudes, the same problems happened with bumping into skyboxes. Several times, security orbs returned him home, before he even saw what he had run into. Waiting for things to rez and flying around private areas added so much time to the trip that it had to be broken up into three sessions on line. We have shown where each of these sessions end on the map. Each session began by returning to the last location. The final session ended about a mile and a half short of the planned end destination, the East end of Gaeta, when a security orb sent Katzu back home. With that, Katzu decided there was no need to go any farther. He had proved Sha's theory, that such a trip could be made and was likely the first avatar, or at least the first dragon, to have done so.