The magnificence of the ocean
it's strength and sheer power;
it is wondrous and haunting,
and spellbinding all at once.

I watch in awe
as the waves do their sidewinding dance along the shoreline,
rising and falling,
pushing then pulling back,
like a hesitant lover.

The waves lap up against me
in a nudging gesture of welcome.
The ebb tide pulls me hard
willing me to go,
and the sea whispers...
welcome home, my sister soul,
this is where you belong.

Shellie Sands
Posted by Bixyl Shuftan at 5:59 AM No comments:

SL Poetry - I Know A Man

I know a man
who became jaded by life
by events and scenarios
beyond his control.
He lost himself along the way.
I know a man who wanted
to take control
but didn't know how
looking to others
to do it for him.
Radically oppositional,
he is alone
in his misery.

I know a man
enormously talented
engaging and intelligent
sarcastically amusing.
He controls what he can
and ignores the rest.
Idealistic to a fault,
he is sensitive and loving.
Trying to find himself and
his personal utopia.
I fear it will remain beyond his grasp
until he can manage
his own reality.

I know a man
who tried hard in life
but had more failure than success.
Constantly seeking the
approval of others,
attracting many, but keeping few.
Overwhelmed by feelings of
abandonment,
he is lost and afraid.
It drives all he does.

I know a man,
whose accreditations
and common interest
piqued my curiosity upon meeting.
I said "hello."
A family man
smart and witty,
he has been my sounding board
for ideas and thoughts.
He is wise but doesn't believe it.
The biggest shoulders I know,
upon which I have cried many a time.
He is my strength
and my guidance.
I am not saying goodbye.
I know a man.

Shellie Sands
Posted by Bixyl Shuftan at 12:01 AM No comments:

Ozimals is always working to improve their products and this results in periodic updates for bunnies. An update totem can be purchased for zero lindens at several sites where Ozimals products are sold. Bunny owners/breeders have seen their share of bunny updates from the beginning. This is usually a smooth process and no bunnies are lost to hibernation. (If a bunny is not updated, it will eventually stop eating because the food and it will not be compatible.)

After a substantial pause between updates, another one was presented to the bunny community. Having obtained my update totem, I proceeded to begin the updating process. This is a long process for many breeders as only one update totem may be set out at a time. Having multiple warrens means the updating process must happen one warren at a time, one bunny at a time. In the meantime, those bunnies around who have not yet been updated will alert you with a message saying your bunny is out of date. 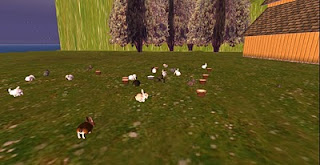 Satisfied that all my bunnies were up to date, I carried on with other SL business. Shortly, however, messages alerting me to an out-of-date bunny began appearing on my screen. Thinking "damn, I must've missed one," I set about in search of the little out-of-date critter. Moving from warren to warren, clicking off text on all updated bunnies, I found a couple out of date...now where did I leave that update totem? No sooner had I set out the totem near the bunnies in question, a message appeared on the totem itself advising "poor sim performance." The totem had stopped working. Frustrated, I popped over to the Ozimals store and got another one. This one also quickly stopped working. My frustration level and impatience on the rise, I teleported once again to the Ozimals store. Thinking I was smart, I purchased a couple.

Back at the ranch, I carried on with updating. Messages continued to flood my screen.Near tears at this point (ridiculous, Shellie, they are pixels, PIXELS!), I looked for my bunny friends on line to cry for help. Finding no one at the moment, I called it a day, deciding I would deal with it the next day.

I was greeted the next day with a barrage of out of date messages. "IMPOSSIBLE!" I thought. The Ozimals group IMs were flying. Then came a message about another update. With everyone in the bunny world flocking over to the Ozimals store, it was hard to get in. Searching my notes, I found other locations and off I went for the latest update. In the meantime, I had bunnies deep into hibernation because they were out of date. Setting out the newest totem, the long process began again. One by one the bunnies were updated. Those in hibernation, however, could not update in that state (I found out after trial and error). Taking up all the hibernating bunnies and not knowing what to do, I continued to update the bunnies I could. A friend told me to try the Rise and Shine drink for the hibernating bunnies. At 500 lindens each, this was an expensive proposition. I updated two hibernating bunnies and still have bunnies in my inventory. Bunnybury begins to sound like a good option at this point but I am hesitant.

But the nightmare wasn't over yet. Just when I thought the coast was clear, lo and behold, another update! This sent everyone into an uproar as you might imagine. This was becoming a chaotic and out-of-control situation. With a deep sigh, I collected yet another update totem. Totem in hand and thoughts of burying all bunnies and getting out of this business, I began the grueling process one more time of updating my 7 warrens...ugh!

All bunnies are now updated, but be careful kindling old nests, set that updater out! You will need it. In what I can only believe was an effort at maintaining some level of credibility, Ozimals offered an olive branch in the form of free Appreciation Food, which is valid through 14 July. On the 14th, all Appreciation Food will expire and vanish from site. At least we all got to hang onto our lindens for awhile.

Would you believe that a film made in Second Life was considered to be part of a children's show? Chantal made “10 Little Aliens” for a competition in which the best short film gets to be shown on Sesame Street. But it almost didn't get considered.

Chatting with Chantal, she told me the contest itself was held by Aniboom.com, who told them Sesame Street was looking for new and original characters. Existing ones were off limits in the contest. Chantal then contacted her team which made everything in the machinima, the avatars, the music, the lyrics, etc.


She went on to say after she submitted the machinima, she got a reply saying the film was disqualified, told that game imagery couldn’t be used in the contest and they considered Second Life a game. Chantal’s first response was to send a copy of the terms of service, and insisted it was filmed in her own area. She was turned down again. Finally, Chantal sent them a third message, thanking them for calling it game design material, not realizing she was so good, it could be mistaken for it. Aniboom then accepted the machinima, though stated it could still be disqualified if it won.

Chantal stated that Aniboom had asked her before to enter contest, even though they had stated machinima wasn’t allowed. “Don’t worry about it,” she was told then. She found it odd that the first time they wanted her in even though the rules were against her media. And now she wanted in, and they didn’t want her. Second Life didn’t stand by it’s machinima, Chantal commented, even though others such as Blizzard of World of Warcraft does. But groups in Second Life do pay attention, such as Metanomics doing a show on the subject.

She went on to tell me some of the aliens were some of Pooky Amsterdam's staff behind those little avatars, including Pooky herself. Kat2 Kit had appeared on the set of "The 1st Question" in one of the alien avies. The avatars were their original design, and Chantal has them up for sale in her sim for very little cash, all funds going to the making of her next film.

Unfortunately, Chantal did not win the contest. "10 Little Aliens" came in 44th place out of the hundreds of short films submitted.

No doubt she'll try again when she has the chance.