Chrome is Becoming a Real OS

A couple of months ago, I came to realize that I needed something better than my old crappy HP laptop. I had gotten the laptop as a hand-me-down because the previous owner ended up with viruses and didn’t want to deal with it anymore. This was fine as I knew how to erase the hard drive and install Linux and even a new copy of Windows. However, there was something that I couldn’t fix, even with the extra RAM that I installed in it. The laptop’s CPU was just way too underpowered. It was just way too slow and cumbersome for even what I wanted to use it for, that being a computer that I could use while sitting on the couch in front of the TV. I wanted something snappier and thus more enjoyable to use. 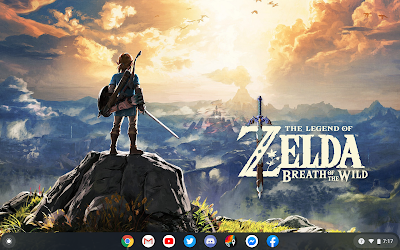 The problem was I was on a very tight budget. I thought about getting an android tablet but then I thought about all the other android tablets that I’ve had over the years and how underpowered they all were. It was then that I was suggested a Chromebook by Game Wylder. Android tablets have been sort of dead in the water for a while aside for underpowered Amazon and Kindle tablets. Apparently, Chrome OS is now where it’s at. I was suggested the Lenovo Chromebook Duo and since it was at my price point and had very positive reviews I decided to go ahead and buy one.

I had not had much experience with Chromebooks aside from the ones that I have to use at work to clock in and check my emails. My experiences with Chrome OS up until that point had not been great. I just thought that it was way too limited to be a real OS. I just figured that it was just a browser. While this may have been true in the past, Chrome OS has since gotten Android app support and a beta version of Linux, which means that you can install applications on it. Steam support could also be available in the near future for more gaming options. There’s still no official way to run a full Second Life browser in Chrome OS, but I was able to hack my way around and side-load a version of the now unsupported Lumiya thanks to some help from Tantari. I don’t foresee myself using it much but it’s there in case of emergency or something.

As for my new Chromebook itself, I’m not disappointed. It’s just as snappy as my main PC when it comes to mundane tasks, transitions seamlessly between laptop and tablet mode, and does everything that I need it to. The keyboard and trackpad are surprisingly usable. I’m even writing this article on it while watching YouTube on my TV. If you need a second computer, I would highly recommend a Chromebook or Chrome OS. 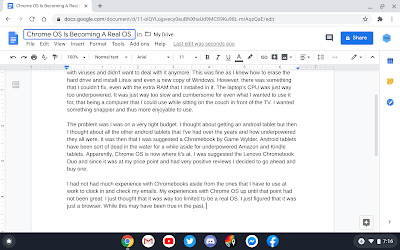