I recently stopped by the sim of my friend Safra Nitely, Devon Dream. Every year, Safra decorates her sim for the holidays. And this year was no exception. "It's a work in progress," she told me when I met up with her, "I started it last night." 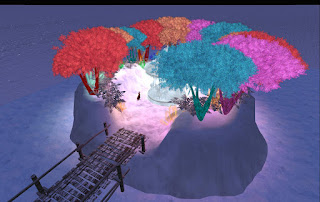 While she had only been building for less than a day, most of the work was already done. The place was snow covered and there were walkways going around much of the sim, often with short stone walls on either side and going through pine forest, the green needles with snow in the leaves. There were also streetlamps with wreaths every so often. One stretch of walkway had colorful lights on the brick walls and white lights on the boards underneath. With the sun set to midnight, it was quite a pretty view. One branch of the road led to what Safra called a crystal island, trees with colorful glowing leaves surrounding a crystal carousel. Once again, this was best viewed the sun set to Midnight, showing a rainbow of lit-up trees. 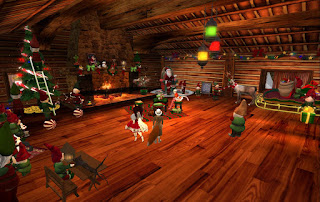 Going further, there was a pond of skating penguins. Unlike what was hinted with the penguins Strawberry Linden looked at earlier, there was no sneakiness with them. As we walked, we passed three stores, which were currently empty. Safra told me they were free to whomever wanted them, "If there is demand, we will add more." We went by another icy pond with what looked like cups large enough for a person to sit in, "We have bumper snowball cars too." There was also a Santa's workshop in which the big guy checked over a list while in one corner elves made some toys and juggled candy canes. By the largest pond is a hangout area, with a sweets stand with lots of candy and cookies on display. One can sit by a table near a stove and nibble on a jam-flavored tart.

Around the area were various smaller displays. There were reindeer, there were elves, there were snowmen, there were polar bears, some playing music, and there were piles of presents. All added to the cheerful atmosphere. 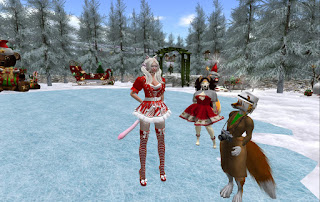 "So this is unfinished," Safra told me, "Another one or two days I think, given I started yesterday on a blank sim. So it's all gone up in twenty-four hours. Most of the time was doing the path and the walls, the rest just filled in after." Originally, she was going to take a break this year, "Some people contacted me asking if I was going to do Christmas (decorating). When I said no, they were line 'What are we going to do then?' Apparently some rely on this place to be together Christmas D ay. This level is open to the public from Monday. It will not be pony-themed, it will be for generally everyone, welcome to come sit, have a coffee or chat, take photos, or just chill out." She commented her work should be all done the following day.

Safra planned a party at the area as well, "There will be a Christmas party here from 12PM SL time to 5PM, it will be taking all of (the) EU into Christmas, with 'NORAD Track Santa. Yes, we will be tracking Santa. We'll have a contest, and fun." 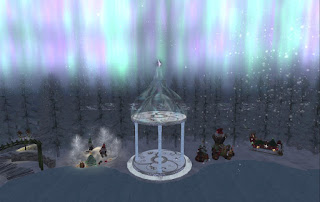 A couple friends of Safra joined us, and there was a few minutes of joking around, then Safra went back to work. Dropping by later, it was evening and there was a pretty aurora in the night sky. A well-done Christmas area.

Posted by Bixyl Shuftan at 1:30 PM No comments: 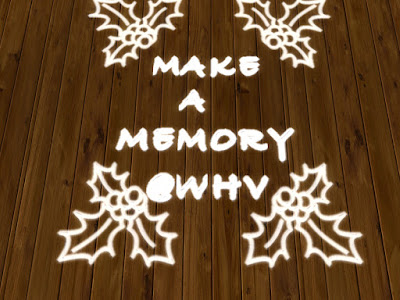 I was a little concerned when I had not seen any notice of Winter Holiday Village which is always a favorite  to visit for years. Finally notice came for the opening last week. This is  a great place for ice skating . Though scaled back in size this year it still is a marvelous experience. 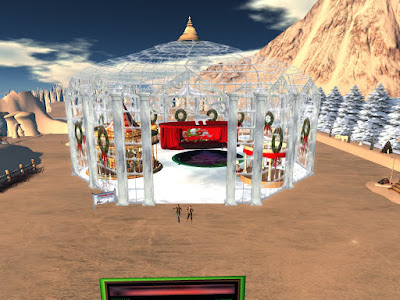 The Ice Ballroom is there with the carousel and chairs for dining. You cant miss it as you skate by. It was good to see the Penguins marching by their part of the village. 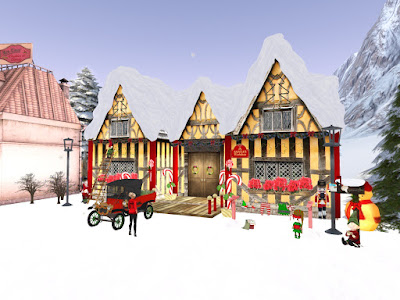 Nearby on a hill stands Mrs Claus Bakery and Santa’s Workshop.  Look for the Reindeer Farm too where all sorts of reindeer are for sale .  Another crystal building holds Santa’s chair with his elves in attendance. Santa will be live there soon taking requests and photos. . There are many places to just sit and relax  or snuggle and watch the skaters as they move along the lake and rivers.

The stage stands on the ice too. There are many shows both live  and concerts and dj’s  going on every day right up to the Christmas eve. Join the group for notices or check the board for information.

One great activity is taking a ride Santa’s Magic Snow Owl. It takes you over all the venues and you get a good look . Look for free skates and also some good choices for skates with AO on sale. I will be going back for some skating.

There is also a Club near by you might want to check out on the same region. Santa eats there and they have a nice bar. 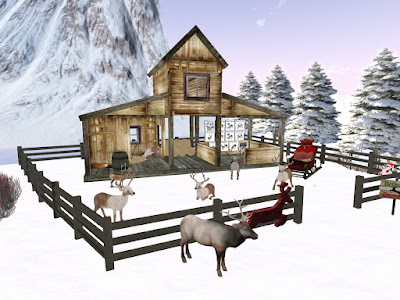 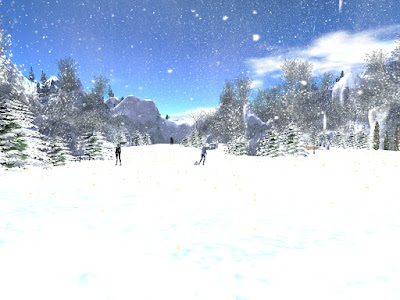 What a busy site I found went over to check out Winter Christmas Love Valley.

This is a place to go skating and touring with your honey and your friends. The skating there is great! The place glitters with falling snow and coated trees, and glistening ice. When I was there it was filled with 18 skaters, walkers and people just relaxing by fires and in little cuddles places.

If you are missing a skate AO,  no worries there are free skates and skate balls to help you . There is a cute North Pole area to hang around .Enjoy the tiny train ride around the tree . 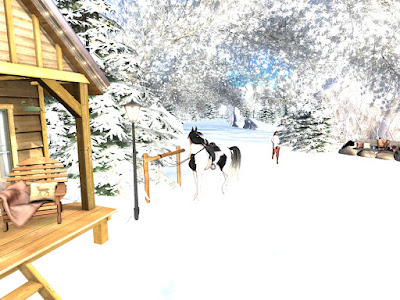 Horse riding is fun here too along the snowy lanes . Bring your own or use the available horse rezzer. There is a  teleport board near the entrance that will take you off to any of these choices.  If you are looking for a place to take stunning photos, this is it! Pick up a notecard about the 2020 photo and film contest at the entrance “.Winter Love Valley Photo & Film Contest 2020 Win 15,000L” Lots to enjoy here! 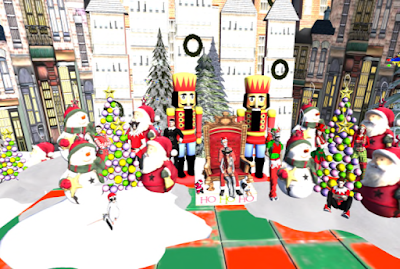 Today , Wednesday the 9th, Patch and a bevy of Moles visited the Relay for Life Christmas Expo. Patch did duty listening to whatever the visiting populace of second life asked for. I wonder how much he could promise. The Moles were arrayed around him and stood patiently. I took some pictures . 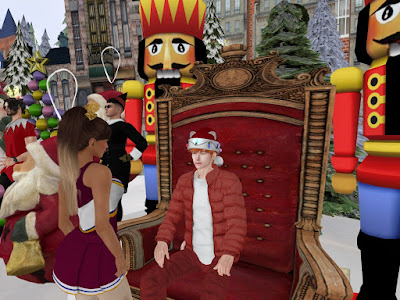 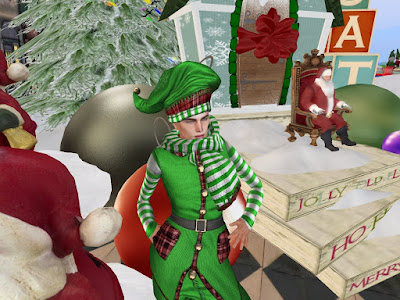 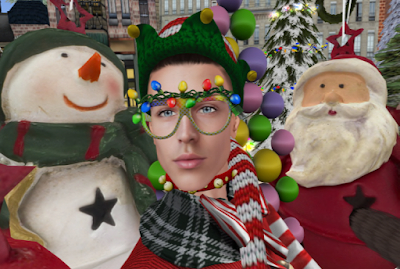 Posted by Bixyl Shuftan at 9:00 AM No comments: 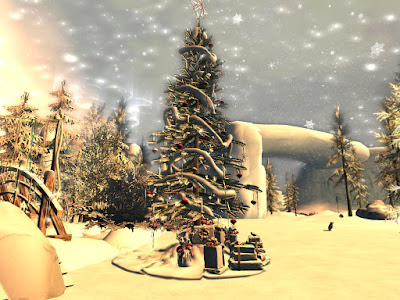 Bellisseria is ready for the season too. Not only are people decorating their own homes and yards, at the Fairgrounds there is an entrance to the enchanted gathering place. 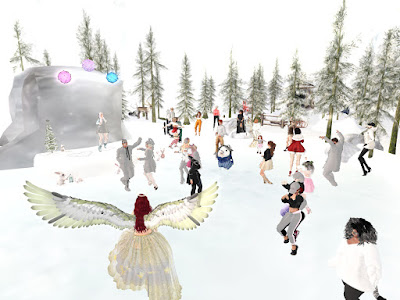 The softly falling snow has covered the ground, some of the animals we don’t see very often have populated the area. A dance area is set up and ready for all the parties that will take place. 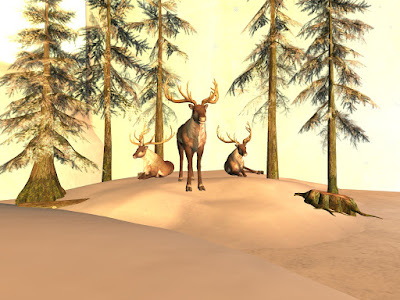 If you don’t live on Bellisseria continent it does not matter . You can visit and enjoy the dancing and fun on this special ground. When you arrive at the fairgrounds walk over to the rock formation near by and touch the dark shadow entrance to get here. I am looking forward to getting to some of the parties .I made the opener.  Prudence (PrudenceAnton) and  Cian Wycliffe created this for everyone to enjoy . To get a peek at the venue take a look at this!
https://www.youtube.com/watch?v=PfmMQ3l18UA&t=11s 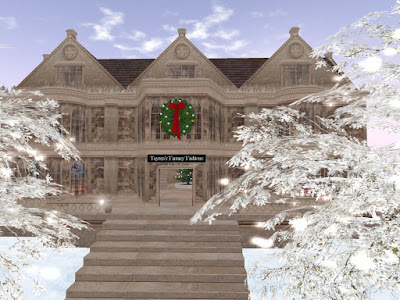 Christmas at Tayren’s region is an experience not to be missed. Here you have a chance to get some  really nice outfits for those formal occasions that may come up during this seasons and some medieval clothing or fantasy for those role play  regions you might go to visit that ask for this clothing . I love her outfits . I discovered them at a Christmas expo about  years ago and have some that I use year after year. 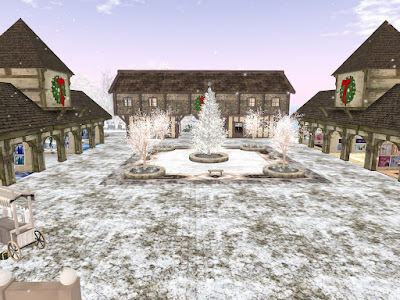 But after you peruse her huge store get out and walk down that long hill to find some quaint shops and farther on a marvelous area to explore. 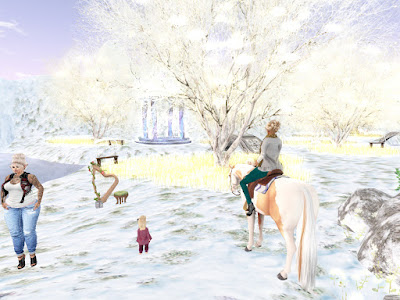 Walk or ride into the Fairie Valley to see how they live. Their homes are built right into the tree stumps, or other natural places. I met a family having a great time exploring. 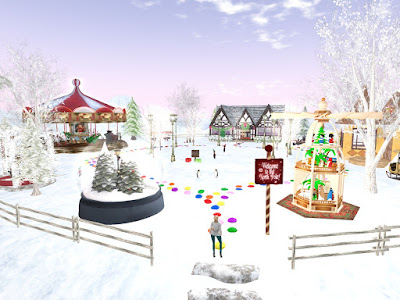 Back up at the top there is a carnival setting with carousel, some shops and I found Santa and sat down to tell him how things are going. I have a feeling most of us have the same wishes this year and he can only do so much. 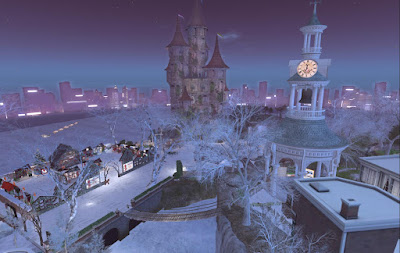 I love going to the Creations Park Christmas fairs. This year it is called Grown with Love. Shopping in the Creations regions is a good gesture because much is donated to Team Fox for Parkinson disease research and help. You will find an Advent calendar there too. It is a little smaller than usual but well stocked with decorations and outfits. 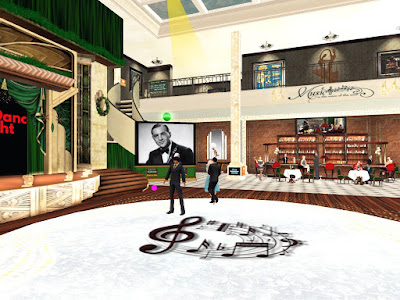 Step into Swing Town part of Creations and check out the events planned at the Savoy for December . It is always swinging and there is great shopping in other areas of Creation Park so don’t miss it.  From the Savoy you can take a left and go into the regular shopping area with a myriad of shops. 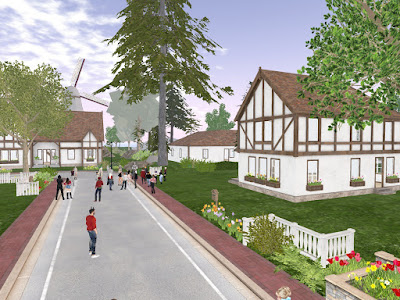 I also stopped over at the opening of the look at the new Linden homes that will become a choice in the future for premium members. It is connected to the American Cancer society site. Many people who already have homes on the Bellisseria continent wait anxiously for new themes in case they might like to move . Right now many are waiting for the Stilts to be released.