A friend of mine had told me ZZ Studios, the exotic “blue movie” studio, was holding a biker rally on Sunday July 17th. It had originally been scheduled for Saturday, but after hearing about the Relay for Life walk moved the event up a day. The event was at 6PM Second Life time, just across the street from the Studio’s theater and social club in Falcon Valley. 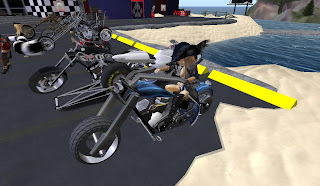 So what’s a biker rally hosted by an adult media company like on the Grid? There were a few more women than the one’s I’ve seen in real life, sometimes with skimpier clothing, and there wasn’t any beer. But they had the essential element: motorcycles. Over a dozen motorbikes were parked in the lot. To get around the prim limit, two riders brought in a couple more bikes by staying mounted on them. And of course, Miss Cindy “Zig Zag” Babi, the infamous tigerstriped skunkgirl whom was the owner and main actress of ZZ Studios, was there.

Most of the bikes were made up from 28-39 prims, some looking fairly well designed. But there was one monster primhog, the GSXR88, taking up 239 prims. While well detailed, those on the Grid whom have had to deal with lag (and who hasn’t) might question the wisdom of using all those prims. Also, maybe it was a glitch of the Grid that particular day, but periodically the GSXR88 would vanish then gradually rezz prim by prim. 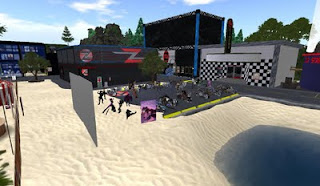 The DJ for the event was Husky Fang. And just what music gets played at a ZZ Studios biker rally? Most were pop hits one could expect at most any other party. They included, “The Reanimator,” “Numa Numa,” a Tron “Derezzed” remix, which got Cindy going, “Wow! I like this song,” and of course one skunk song, “Stamp on the Ground.” Also played was “I Can Only Imagine,” which I hadn’t heard in Second Life since a visit to a Christian club. And the DJ played one song just for one biker ...

On the day I was born, the nurses all gathered 'round

And they gazed in wide wonder, at the joy they had found

The head nurse spoke up, and she said leave this one alone

She could tell right away, that I was bad to the bone.


They talked about the bikes and the music, but talk went to other things. Somehow food and deserts came up, and conversation turned to cheesecake. One of the girls sighed, “Cheesecake? Oh, I would make LOVE for cheesecake.” Some of the guys promptly began doing Internet research for cheesecake recipes. 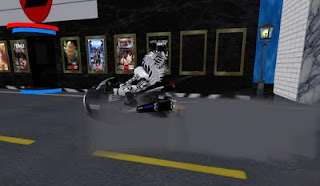 Cindy Babi had a bike of her own in the rally, her “Super Sybian.” But at another point she rezzed something else, a kind of rideable jet. Readers may remember from her interview “never put Zig Zag in the cockpit,” so what would happen if she tried driving the thing? The jet launched, and quickly zipped around the office building. It quickly went past the beach, and into the water. But before the engine’s fire was flooded out, she got it out of the water, and ZOOOM!! It took off like a rocket. Within a couple seconds, the jet was out of view. Would Cindy end up being the first porn star in orbit? A minute later, she walked back to the bike rally. She had managed to get away before becoming an accidental astronaut without a suit.

It was soon time to judge the bikes. Third place went to Valen Greymoon, second to Krae Evanier, and first went to Polecatt Merryman, who owned the GSXR88. But the crowd wanted a little more, and Cindy agreed to a “Burnout” contest. Krae and Valen entered, along with “Bad to the Bone” Ronald Milev. One after another, the two biker babes and biker guy drove to the street, revved their engines, and sped down the road for a short stretch. Krae Evanier was declared the winner of the Burnout and 600 Lindens.

With the end of the contest, the bikers began going their separate ways. And this ended the bike rally at ZZ Studios.