Recently, Gemma Cleanslate wrote on the Mystery Science Theater 3000 in Second Life. I had come across the place before, in 2008. And in writing about it for Second Life Newspaper, I did so in a humorous style that Editor Dana loved to the point it was one of our exhibition articles at the SL5B later on. With the close of SLN, however, the article became blocked from view, so here it is again. There have been a number of changes at the place since it was written, so keep in mind this isn't exactly the same ship. Things change in four years.

I heard there was a tribute to MST3K here in Second Life, owned by a Squeebee Wakawaka in the BlaksleeWorld sim at (196/160/24). I put visiting the place on my “to do” list. However, the arrival of a couple visitors at the newspaper office sped up my plans a little.

Crow: Look Tom, a fox in a hat and coat!

Me: Wha- what are you doing here?

Crow: Look Tom, a fox in a hat and coat that talks!

Tom Servo: Looks like Rupert Murdock is out to take over the newspapers as well as TV news.

After a short conversation, I brought up the MST3K place here, and the two robots were curious and agreed to go there with me. So we teleported over.

Tom Servo, Welcome to Second Lag, where you too can hurry up and wait. 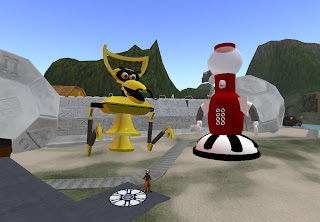 It wasn’t long though before the scene became clear. There stood two large statues of two familiar robots, with a certain ship behind them.

Tom Servo: Really? I thought that mustache looked rather fitting on you.

Crow: And is that the Satellite of Love? Oh noes! It’s half sunken into the ground. The apes have taken over! You idiots! You blew it up! Darn you all to heck!

Tom Servo: Wasn’t that supposed to be “Damn you all to Hell?”

Crow: The last time I used that line, I was in a PG sim and got booted.

We then went around to the front of the ship, at least we thought it was the front. The ship was next to some water with a big fish about to eat a motorboat and a small inner tube near the ship. 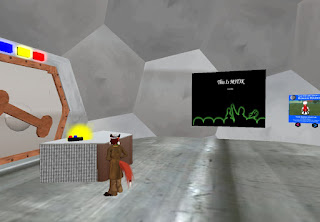 When we got closer to the door, it opened and we stepped into the Bridge. For a Bridge, it was pretty bare, just a few screens, but the panel that told everyone “We got movie” will be unmistakable to the fans. There were also a couple vendors which sold items related to the show from Joel’s uniform, to statues, to a Tom Servo avatar.

Tom Servo: I demand a cut of every transaction. And I’m going to have to ask Joel to modify me again. I don’t want a thousand of me running around.

Crow: But think of your fans.

Tom Servo: Hey, here’s one of you too.

Crow: What? I’ve been robbed. Call a lawyer! Hey fox, you wouldn’t happen to know a legal weasel, would you?

I tried pressing the button to activate the “door sequence” leading to the movie theater, but it wouldn’t work. Poking my hand through the bone-shaped-hinge, it went through.

Crow: Holograms! We’ve been had all these years! They were never able to just off oxygen to just the bridge to force Joel to watch movies!

So we then went through the door sequence, 6, 5, 4, 3, 2, and through the final door into the theater. We found the movie screen with one of the numerous cheesy flicks that aired, with the familiar shilluetes of Joel and the two robots, poking fun at it all the way as always. And in the seats were over a dozen people watching, and joking it along with them, some using language the three never did.

Tom Servo: I have this strange feeling, like there is an audience sitting right behind me, and laughing along with me.

Crow: They can’t do this to us! We have a copyright on riffinig bad movies! 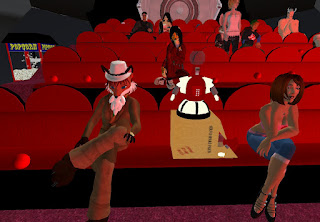 And so, Crow went off to look for someone to complain to. I thought about asking the man behind the sales counter what he might know. But instead, Tom Servo and I got seats, and sat to watch this “so cheesy you could smell the parmesan” for a while. The wisecracks, like in the TV show, were the real entertainment.

Eventually, it was time to go, but not before some final words from the robots.

Crow: Good luck next time at the chicken coop.

Tom Servo: And what’s with that hat and overcoat? Shouldn’t you be wearing a space pilot’s outfit or something and hanging out with a girl named ‘Krystal?’

It was then that I parted company with the two robots.

Friday evenings are the best time to show up as that’s when the MSTK fans meet reguarly for the weekly feature. One can also see the flicks in a lounge chair and TV at the shore near the robot statues, but it’s not nearly as fun

Chances are if you live and breathe, you like 80’s music. And if you type 80’s music on a search you’ll find an 80’s club within Second Life. What club should one go too though? 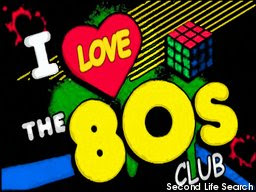 In this humble furry’s opinion, the best place to go is Chini’s and Joh’s “I love the 80’s club.” After being in business for a year now, they recently celebrated their first year anniversary. Besides just listening to 80’s music there’s more around her club then just clicking the play button and dancing with friends. There’s a greedy greedy table and bumper cars. Wait bumper cars? I don’t know any other clubs that have bumper cars. I’d say that’s pretty unique. Among of the events Chini had to celebrate the one year anniversary was various contests like “300L for the highest score on skeeball.” I was mildly upset I was 10 points away from 300L.

Also when you walk in you see 80’s poster,s like the Blackhearts or the Police.
Behind the stage with the host and dj there on a brick wall you see their cool logo which says “I love the 80’s club” which does look very 80’s.That and a few arcade games to goof with while your hear a live dj play 80’s music.

The club got it's start when Chini to surprise her boyfriend wanted to make an 80’s style party and built it up in the sky of the sim so Joh wouldn’t find out about it.This was on an 1800’s pirate sim. Then she got her friends to hang out there and have a blast. Later on Chini along with Joh built their own club on the Pengo sim. “I Love the 80’s Club” as they both have a passion for the Reagan era style of music. Now Chini has moved her club to Neurnburg North.

However even with 80’s music theme, Chini and Joh still had to work every day to overcome the challenges of running an SL club. Having a popular music genre doesn’t equate to instant success and the club bursting with people throwing their hands in the air. The pair of them persevered throughout the year. Over time they hired dj/s and hosts to keep the club active and fresh for people to stop and have a good time, Chini said.

Chini Blaisdale-Solo (chinitadoll.blaisdale): I cannot even say we are experts in running a club, but we learn something new every now and then.

I commented back looking at the real-life New York Giants the football team. A few years ago they had a 0-2 start. Despite that they worked together as a team and pulled through and won the Superbowl. Chini says that team work helps keep her club on the up and up. No one wants to come to come to a club where the staff isn’t managed correctly. Even if Chini and Joh aren’t experts, seems like they have a good game plan at least.

Chini also seemed to have good support from her buddies, "But mind you our very first vips who happens to be very good friends of ours now are not big fans of 80's but they have made the club their home."

Just like the popular Bay furry club I reported on earlier, upholding a friendly environment seems to be a big key to making a club popular. Lots of people in SL or real-life want to come to a place they feel comfortable at and at home.

It looks like Chini and Joh know how to make the 80’s live again. Their traffic isn’t as high as say the bBackhearts, but still pretty high to draw regulars on now a daily basis.

Next time you want a dose of the police or Madonna or tears for fears Bruce Springsteen or bon Jovi, check out the “I Love the 80’s Club” It’s certainly a place in SL to call home.

Grease Coakes
Posted by Bixyl Shuftan at 6:00 AM No comments:

Last Sunday on Feb 26th, I went to a couple music events that I happened to just hear about. The first I stopped by at was an ABBA tribute at Anvaya Cove after getting a notice in a group. 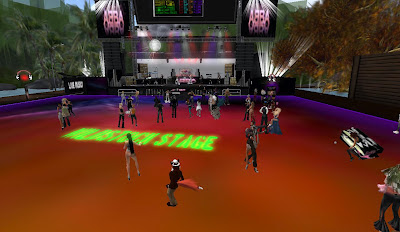 From Keras Karas, Hey guys!!! There is a great tribute concert ABBA at my sim. IF you guys love ABBA, this is a MUST SEE event! Come join us for some fun. (smile) 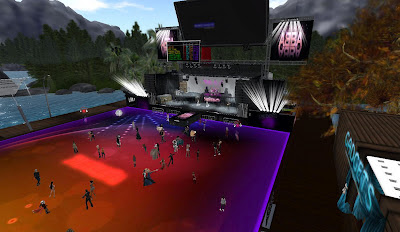 I went over, and the place was packed. With 55 avatars, there must have been a lot of ABBA fans on the Grid. 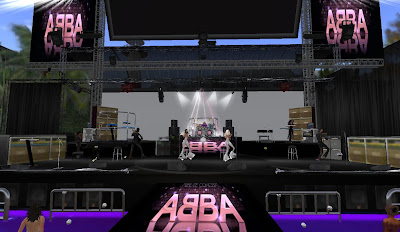 Friday night and the lights are low,Looking out for a place to go,Where they play the right music, getting in the swing,You come in to look for a king, 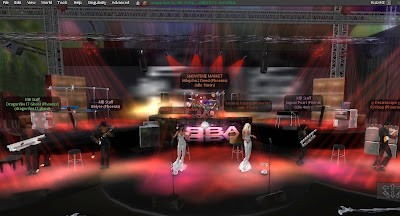 Anybody could be that guy,Night is young and the music's high,With a bit of rock music, everything is fine,You're in the mood for a dance,And when you get the chance, 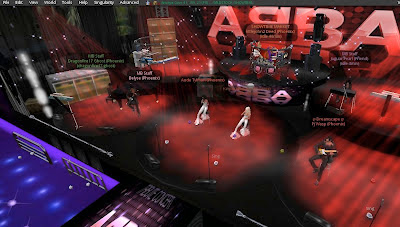 You are the dancing queen,Young and sweet, only seventeen,Dancing queen, feel the beatFrom the tambourine, oh yeah, 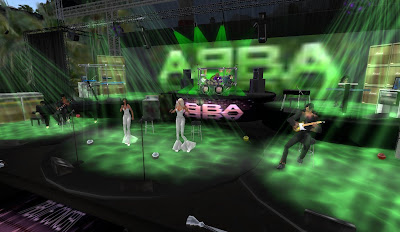 You can dance, you can jive,Having the time of your life,Ooh see that girl, watch that scene,Dig in the dancing queen. 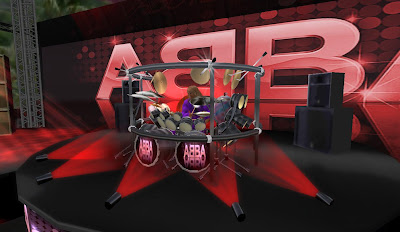 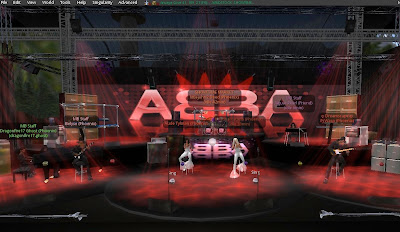 The event went on a little past the two hours scheduled, but eventually, it came to a close. 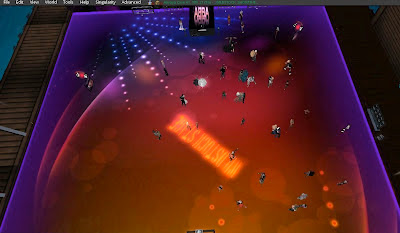 At the end, thanks were given to all involved in the concert, THANK YOU KATIA KERES TO PRODUCE THE SHOW OF TONIGHT ON YOUR LAND .... PJ ON GUITAR ** JAGUAR ON KEYBOARD ** DRAGONFIRE ON PIANO ** BELYSE ON BASS GUITAR **LITTLE JOHN ON DRUM **** KRISTINA AND AUDE THE SINGER ABBA ******* THE BAND ON STAGE APPLAUSE THEM . 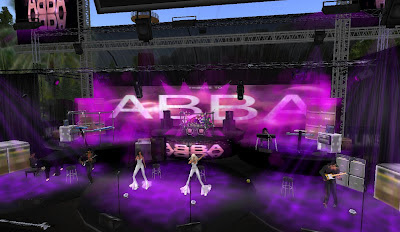 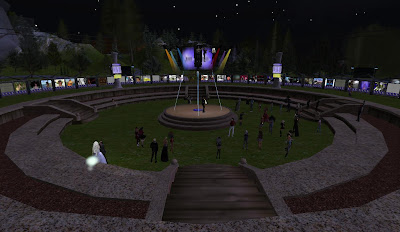 Feb 26 was also the last day of the Metaverse Music Expo in Areo Pines Park. Cindy Bolero told me it had been going on since the 22nd, with Friday, Saturday, and Sunday the main events. 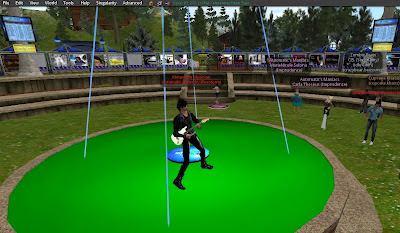 "The Metaverse Music Expo is intended to expose new avatars or avatars not already aware of live performances in Second Life, as well as serves as at networking mechanism for musicians and singers, connecting them with music professionals, venues, as well as a conference for marketing, technology, and artist development. By popular demand, the expo has been extended another week so visitors can still catch some live music and explore the expo grounds. ... Its been an amazing collection of talent and enthusiasm, over 80 performers during three days, with a new act every 30 min." 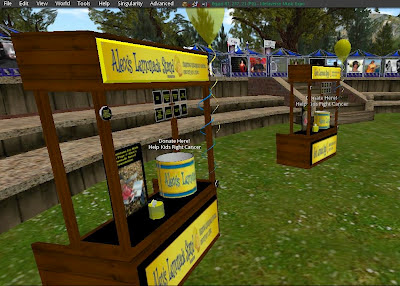 Around the area were "lemonade stands" which took donations for charity against cancer. One of the people involved, Lillith Siamendes, told me they had plans to repeat the event next year.

Sadly, the day was a bit overshadowed by events with Linden Lab, so publishing was delayed until now.