September 11 Memorials, Past and Present

The September 11 2001 attacks are one of those few events in history in which people remember where they were when they heard the news. Like Pearl Harbor decades ago, it led to war. And thanks to the Internet, many many thousands shared images and personal stories. Second Life wasn't around yet when 9/11 happened. But once it was, memorials and other tributes began appearing very early in it's history as soon as 2004 (New World Notes article). 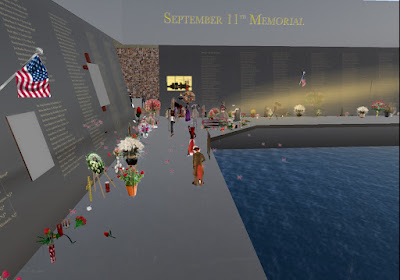 Over time there have been a number of 9/11 memorials. One of the largest and best known was the one a quarter-sim in size by Alliez Mysterio. It was up for only two or three years, but it was well-attended. 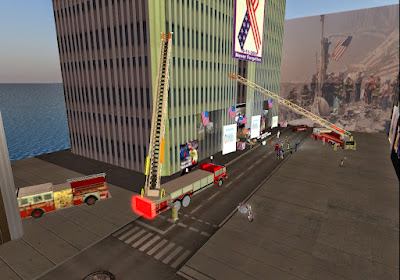 Areo Pines Park had a "Stairclimb Tribute" in honor of the fallen firefighters. Cindy Bolero would have it up each September for several years. These were two transparent towers in which one could get and wear a free fireman's uniform and climb the 110 stories to the top. 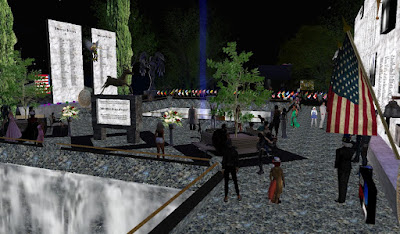 Stagg Island had a well-done marble memorial with plenty of detail, such as the two square waterfall fountains meant to represent the Twin Towers. On Sept 11 itself, people would gather for remembrance events. 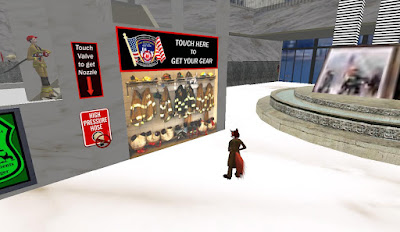 The Stairclimb would be up each November for several years until the shrinking size of Aero Pines park eventually meant there wasn't enough room and the park would eventually close in 2018. 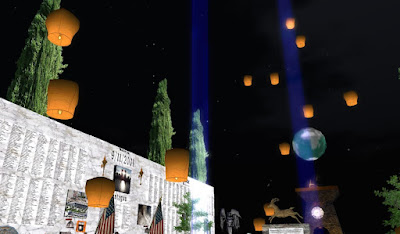 Also in 2018, the Stagg Island memorial would move to the Yellow River sim after the death of it's builder Fazio Magic. Geena Zackerly would keep it running for a couple more years, but 2020 would be it's last year. 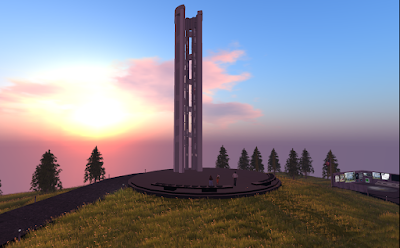 Currently the largest detailed memorial in Second Life is the replica of the real-life Flight 93 Memorial, over Copperhead Road, which was made last year in 2020. Owned by Paul Woodrunner, the main part is the "Tower of Voices," a 93 foot metal structure with 40 wind chimes. 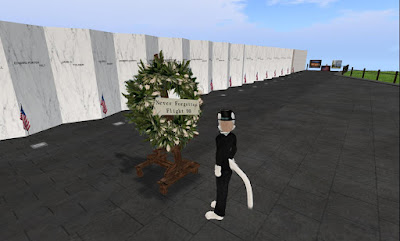 But since last year, more work has been done on the place. The memorial has doubled in size to include the marble "Wall of Names," of which an event was held at the one in real life on September 11. There's also the visitor shelter and a replica of the gate to the crash site.

One other memorial was "Always Remember" which this year was in Gold Haven. Dropping by on September 11, I ran into the owner Bryston Vanvleck. "I appreciate you visiting all these years," he would tell the people there. Asking when the memorial first came about, he told me, "Well, I started building my NY lofts back in 2007, I believe it was 2008 or 2009 when I first held a memorial in the store. (The) following year, I started building this and it has evolved over the years. ... I have thought about replicating the real-life New York memorial many times. But people do appreciate the intimate simplicity of this one."

When it was brought up just about everyone could tell where they were when they first heard about 9/11, Bryston responded, "That is what this place is for, to reflect and share your stories. I meet so many good people with heartbreaking stories they share. But anyone who was alive will tell you exactly where they were that day. I visited ground zero 3 weeks after it happen and it had a profound effect on me." 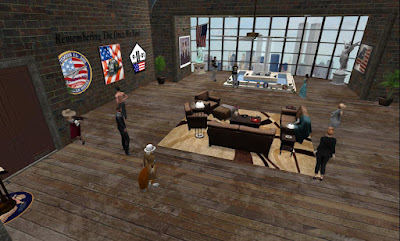 Among the stories was, "I was riding the bus down 16th street to go to work when dozens of fire and police cars zoomed past us. The bus was full and everyone's phones started to buzz. That's when I heard someone flew a plane into the Pentagon. The father of a friend was on that plane. What was scary was not knowing what would happen next. Rumors circulated vans were filled with explosives, etc. Surreal indeed."

As this year marked the 20th anniversary of the attacks, it's noteable that Second Life not only has residents whom were young children when they happened, but is getting residents whom hadn't been born yet. Plus some older residents whom were around when it was just a few years before have passed on or otherwise no longer able to get online. The event is transitioning from recent history that practically everyone witnessed to history that more and more people never saw for themselves but know only from recorded media. And of course from memorials, both in real life, and in Second Life.

Posted by Bixyl Shuftan at 5:30 PM No comments: