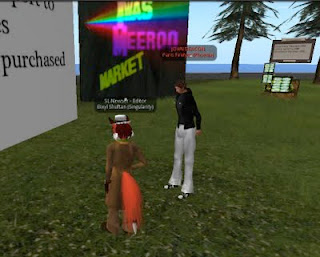 While at the Twas sim for the Meeroos article last week, I ran into a Paris Firelyte. We talked, and what was on his mind was more than virtual critters, but virtual land, “I rented property from a gentleman. He has a big organization called Omega Properties. Well on that sim, he kept all the boxes for all the properties he was managing or collecting tiers from. He just ups and leaves. No one has seen or heard from him. ... He just disappeared, took everyone’s cash.”

Paris told me the Omega building was still around, “which I don’t understand. ... The sim owners reclaimed my land, and gave me one hour to get my stuff. Apparently this man didn't pay for the sim preminum. ... Anyway, I don't understand how SL is still allowing his company to remain with the pay boxes still there.”

Paris took me to the building in question, in the sim named Omega Group Properties (29, 123, 22). The two-story structure had a number of boxes for different properties, listing the owner of the place as Chaos Ametza. People could pay one week at a time or pay ahead up to a year in advance, “I had land at Tycoon Island ... you can still pay, ut the entire sim has been reclaimed and has been moved. So Tycoon Island is non-existant.” He pointed at the boxes around him, “all these boxes, people had property with him.” 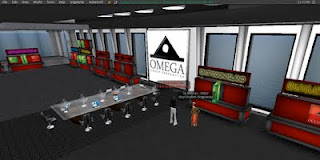 Paris had no idea how long Omega Properties had been around, “I was there for about a year and a half. Then he just disappeared without a trace supposedly?” He and others were getting their eviction notices last month in July, ”And after my land was reclaimed ... I kept getting notices saying that my property payment was past due. PFFFFT!! Whatever!” He pointed out one particular box, a lady whom had paid for a year in advance, “She only 27 wks left and that sim is gone. She had to buy another property. They reclaimed her sim too.” He looked around, “I just don't understand why this place is still here, makes me very angry.” I would later read the lady had lost nearly a quarter million Lindens, close to a thousand US dollars.

Paris told me what he did, “I went to every single board and sent notices to every person here, told them not to pay anymore cash to Chaos Ametza, is his name. They pretty much all listened to me. He owns Omega Group, but he does not own the sims. I found out the hard way. The Dreamland group took them over. I guess they were the owners, or at least they told me that.”

“(I) wish I knew his real name. I would hire a lawyer and sue him. ... I am not the sort of person who believes in suing, but I don't like to lie dead while people steal me blind either. And I am very angry with Second Life. They have not removed this place. All these people were wronged by him. Not right.”

Paris told me he had saved a conversation with the Dreamland group. He passed me that as well as a few notecards of responses from other reners plus conversations with Omega employees TIlly Putzo and Karla Preiss. Paris told me he had been initially upset with Tilly and Karla, but concluded, “No one knew what Chaos was doing. Tilly and Karla had land with him too. They got ripped too. ... They can't do anything with this building because he didn't give them any rights.”

An Internet search revealed Omega was listed on the Destinations Guide, as well as a Facebook Page. On the Second Life blogs, someone else had complained as well (Paris later added comments of his own).

I sent notecards out to several of the names mentioned by Paris. One tenant, Jonrad McCallen answered, sending over a conversation with his servant with Tilly, plus an announcement he sent to other residents on his sim of Paravaci Outrider

It is with a heavy heart that we find ourselves without our beloved Sim. Regardless of how it happened, news has reached me that the sim was going down anyway.

Short version: Omega Properties has not heard from Chaos ..apparently MIA..and Lindens Lab, has been shutting down each of the Sims owned by Omega Group..because the tiers have not been paid by him and they are reclaiming the lands.

At any rate. Please look over your tier payments..and if you still had days coming to you, I will personally reimburse you. Just give me an amount and I will forward payment to you.


Victoria Chung also answered me, “It was as simple as Omega, its leader, left and did not pay his rent to Dreamland ACS so it was reclaimed. Then the lands was divided to each avatar estates and i am one of those. We just set them out for rent since it was abandoned and reclaimed. ... Sorry, but that is all I know.”

Doing an Internet search, Dreamland is a part of “Anshe Chung Studios.” To those residents not familiar, Anshe Chung (Ailin Graef in real life) is by far the biggest of Second Life’s land barons, the “Rockerfeller of Second Life.” In 2006, Anshe announced she had made a million dollars from land dealings in Second Life. In June 2009, the ACS had purchased the Outerland Estate. Another Internet search revealed a few more details of it on the “Second Life, A Second Chance” blog, plus some details this year on the “Adventures of the Chung Sisters.” Apparently they went after the Azure Islands Estates as well. There have also been some complaints about their service to longtime renters as well, as this blogpost from Kitty O'Toole shows. 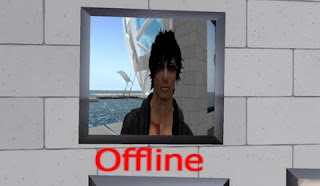 That the biggest land baron would be involved here does raise some eyebrows. Why did Chaos Ametza rent the sims from ACS and then use those to rent out parcels instead of going directly to Lnden Lab? And with Chaos gone, why is that rental building still there?

And of course, what happened to Chaos? Was he somehow banned from the Grid by Linden Labs for some unknown reason? Or as Paris felt, did he “take the money and run?”

What is certain is that a number of people found themselves out of virtual house and home, and lost their deposits, some having paid big money. 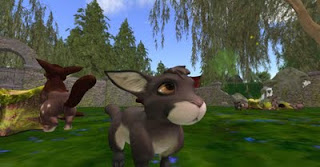 In May, we took a look at the new hit breedable pet on the Second Life Grid: The Meeroos. Being more interactive, having more personality, and slower reproducing than previous breedables, it looked like the company behind them had a sure hit. Nothing it seemed could go wrong.

Unfortunately, trouble did come. The Meeroos blog stated that “since the beginning of July,” someone “had been committing a series of exploits with the Meeroos.” Then a counterfeit store was built in the Twas sim, which began selling fake food. It was traced to two day-old accounts whose names were variants of “Meeroos Resident, the asset manager of the Meeroos’ company staff. Besides depriving the company of Lindens, the phony food contained unknown scripts with unpredictable effects that could be fatal to the virtual critters. 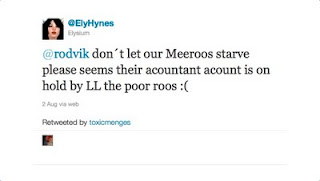 Linden Labs soon stepped in to ban the griefers. Unfortunately, they blocked the wrong account. They blocked Meeroos Resident from the Grid, as well as shutting down the Twas Sim. The result was the company unable to sell food, and pet Meeroos going hungry. New world Notes described Meeroo owners as tweeting Linden Lab’s Rodvik Linden, pleading him to let them feed their pets.

Fortunately, unlike some other breedables, Meeroos do not starve to death. Instead they’re described as running away in search of food, able to be recalled by a “whistle of return.” So there apparently was no danger of pets being lost through lack of food. And eventually, the Meeroos Resident account was released, as was the Twas sim.


It's been quite a weekend here, for all of us at Malevay Studios and our wonderful community around Meeroos. We know this has been a challenging time that has been both frustrating and often discouraging, but I am pleased that we have weathered this storm and have arrived on the other side. Linden Lab and Malevay Studios have been working together to remove fraudulent content from the grid in order to restore confidence to Meeroo Parents. As always, you are our number one priority, and with Linden Lab we have taken the required steps to reduce the threats that have been plaguing us. 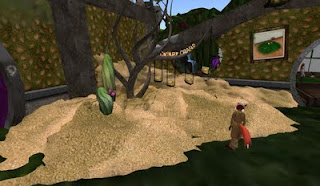 Second Life Newser contacted the Meeroo owners Grey interviewed, but they had since given up on raising pets. Dropping by the store in the Roo sim, residents were dropping by to get food and other goods. In once corner was a big pile of grain, as if to advertise there was now plenty of food. One lady told me she was getting her first Meeroo. Others, however, told me of troubles, “... all of mine and the stumps vanished and still are missing, I had 24. So now I have to buy a new stump and food. Gone, vanished. I’m so angry because I just bought a snowpaw. Now I have nothing and lost my $400 and Meeroo people have not found them yet! Now I’ve just ordered berries and again not delivered. This is the 4th time this week I did not get delivery as well.” He was filing reports to the Meeroo website at support. Apparently, this resident was still having some problems.

A few days after the Meeroo troubles, another virtual pet company, Petables, announced plans to eventually close it’s operation in the Second Life Grid. While their turtles will still be running for now, “At a future date when the turtles are no longer paying for their server costs and the tier for the store in Shark, we will give a week or two warning, and then shut them down completely.”

Petables went on to explain the reason for this was an exploit left unresolved, “There is an issue on Linden Lab's end that was reported in 2006 that Linden Lab has never addressed. This issue allows people to steal whatever they want from vendors, and there is nothing that we can do to stop it. ... We have done everything short of go to the Linden Lab office building and refuse to leave until they at least talk about this problem, and have been ignored or dismissed every single time. For us to see something that we have poured thousands of hours into treated like that by the platform provider is probably the most de-motivating thing that I have ever experienced.” They explained one person in particular had stolen “thousands of US dollars worth of product from us,” and could no longer deal with Linden Lab’s refusal to solve the problem.

Second Life’s most popular pet remains on the grid, but another has given up due to the same kind of trouble that apparently the danger of will be around indefinitely.