A Double Sim Move in the Sunweaver Estates 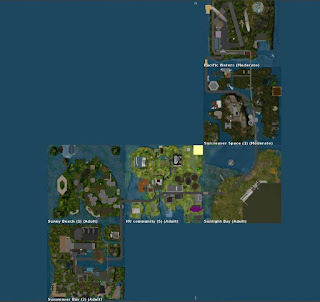 The map of the neighborhood the Second Life Newser office sits in will soon be changing. For years, the Sunweaver Estates has had Pacific Waters in the northern part of the land owned by Cynthia Farshore and the home of the Farshore Field airport. And in the eastern middle part of the landscape there was Sunlight Bay, owned by Nydia Tungsten and the home of Mouse Hole Manor. Right now, the two sims are undergoing an ownership swap. When finished, Mouse Hole Manor will be at the end of the estates in Pacific Waters, and Farshore Field will be in Sunlight Bay in the more centrist position with planes able to fly in from two directions.

Over the last 4 air shows and in general this field has been hampered by the restrictions of only having one open side. I have asked Nydia to help me by doing a land swap. So starting now you will see things disappearing on Pacific waters and Sunlight Bay, don't be alarmed.

Yep, here's the deal, Cynthia needs a sim with access on both sides for her airport to do better. She has come to me asking if we can swap. I see no reason we can't help her out. So, that means we need to pack everything up and be ready to move. I would like everything up by Thursday if possible. I have a few Idea's on creating a home  for us, maybe a beach house? We'll see. Please start packing things up when you get this notice. Thank you my angels. 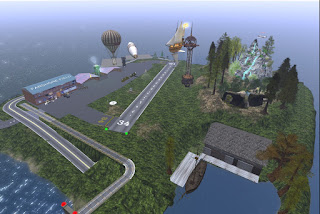 I would have a few words with both Cynthia and Nydia on Tuesday evening inside her Goblin Cave. Cynthia told me, "I'm just now getting the working area cleared." Of how long it would talk, "The aim is to have the some things in place and ownerships done by Thursday evening. (The) reason is the local renfair starts this coming weekend, and my tent has about everything but Internet. ... Nydia already has her sim cleared. I need to get all my things off so we can changed renters." Sunweaver chief Rita Mariner, who was there, stated, "Everything but the road is off Sunlight Bay, but if I need to remove that, it's a minor thing." 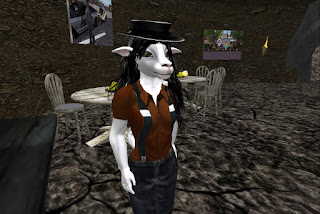 Cynthia stated it was she who first had the idea of switching the sims, "I begin seeing problems when I first built the strip. I had it a lot shorter because you were so close to the sim border taking off one way. And then you hit the sim crossing coming in but others as well as myself found it too short. Long story short, found the sim with only one open way too confined, First air show, everyone including me kept running into the sim border and either the plane went poof or crashed. Over time things got better, but nothing can fix the closed borders but getting a sim with open ones. So I started looking at what sims could fit the bill and one was Sunlight Bay. I like it because it was centered and opened across." 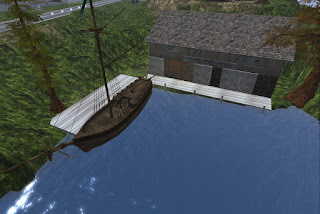 The airport owner mentioned some possibilities, "You can put a runway in and use both ends, or put in two runways in an 'X.' There can be more area for a wharf. You can see Raschid's pierside warehouse is stuck in a tiny nook. ... I will try to have a passage all the way around, you'll notice right now you can't sail behind Nydia's house. There wil certainly be open water where there is right now. However, to place the things there will be less water. But you will be able to sail through. I do want a small port so we can have boat traffic, as well as plane. Which means we may be able to seriously look at a boat race for next year's Relay for Life." Rita then boke in, "I do want a pedal car race next year too." Cynthia commented, "Rita wants a race using cars she is capable of driving." "Slow enough to stay on the darn track!" Rita laughed. 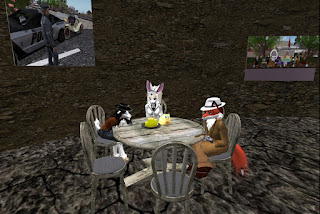 Cynthia looked around the Goblin Cave, "I will see if I can give it a slightly larger dance floor, since we have dragons among us now," meaning DJ Geerkil and a few of his dragon peers, "So it will need a larger entrance and dance floor. Both easy to do when it is moved." Rita joked, "Since dragons smoke, we will have to designate this a smoking bar." There was a bit of joking back and forth for a few minutes.

It was agreed that everyone would be ready to swap the sims on Thursday, "I think Thursday is fine," Cynthia felt, "I can see I'm still going to be packing through tomorrow. Just look at the cave alone how much there is."

After Rita left, Cynthia stated of the railroad bridge connecting Pacific waters to the sim to the south, it would still be around, but probably adjusted slightly. The Puddle Jumper mall would not be moved, but torn down and replaced with a more 19th Century looking building, "It's building design is not fitting with the steampunk theme I'm aiming for. ... It will be a taller one to take less land space." She didn't have a design for it just yet, " looking around but may still just build my own." Much of the road around Farshore Field would likely be scrapped, though, "Tjere already is one running through. That said I, will have it stored and can pull it out for the Relay races. "And the new way the sim will be laid out will allow new things to be thought up for the races."

"As Shocky (Shockwave Yareach) said, it's exciting. The door has opened to new possiblities. ... It will be a lot of work coming so there will be constrution for a long time." 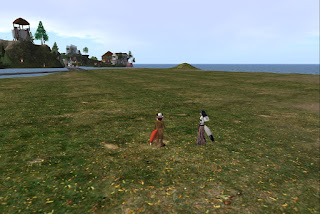 Talking with Nydia, She told me, "When she approached me with the Idea, I agreed that an airport should have at least two ways in and out, and we spoke some more, and I agreed to the swap to help her out. So we emptied out our sim today for her to start her side." She then took me to Sunlight Bay. "Goddess, this place looks empty...." Nydia looked around, " It hasn't looked like this in a while." For only the second time in many years, the first being a brief time between the taking down of the old Castle Mouse Hole and the setting up of the new Mouse Hole Manor, the sim was practically bare. there was only the Sunweaver road going from HV Community to the east and to Sunweaver Space to the north,

"Seems wierd not calling this sim home any more *laughs* But, one of the Angels had a need for a better area. We will still be in the Sunweaver community, which is a very important thing to us, and to me. I have been with the sun weavers from almost day one as you know. Being here among them, being allowed to have one of my Sims here with Rita, it means a lot to me."

I asked Nydia about any possible changes to the vicinity of Mouse Hole Manor besides the move. She told me, "I am toying with a few ideas, semi tropical themed, you know me. I have always been a sucker for a good beach. We plan on still having the open water area for the community, for small  boats and personal water craft, maybe even some fishing. Rita and Cynthia will have the road and train coming to our sim, to maybe a pier and have the house across the lake." I mentioned Cynthia's plans for a wharf and boat traffic, and suggested if there might be a little boating between the two sims. Nydia answered, "There is the small river between the two sims, so that is quite the possibility." 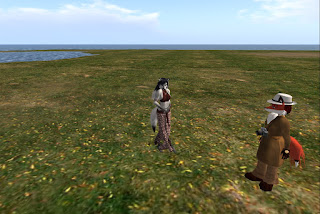 Nydia allows a few guests to reside at her manor, and I asked how they were handling the move. She answered, "Of the ones that live here most have said they had no problem with the move once they knew why. I think the most difficult part of the move for me is picking up each of the movies, almost 300 of them. *laughs*" "That is a lot of movies," I commented. "Yeah, but again, it is more of a hang out thing. I leave them out so no one needs to be in a group or anything to come watch them, quite a few of them have been requests. I don't mind opening my home for people to watch a few movies. As long as they respect personal spaces ( Bedrooms) and respect others that are there, all are welcome."

Nydia thought more about possible changes, "We started a theater, when we first had that 1/4 sim, an underwater theater. I am thinking I may put up a form of water theater thing time, with innertubes for seats....maybe? Ranchan helped me with that (the theater), I am no builder by any means, I am lucky I know so many talented builders. ... We'll have the family club of course, have a personal water craft everyone can use. ... I want someplace that the Angels can be proud of."

Although Nydia's home will now be at one end of the Sunweaver Estates instead of the middle, that doesn't mean she'll be less involved, "Just because I will not be next to my sim HV (Community) doesn't mean I won't still be keeping an eye on it." She will still be dropping by Ranchan's space carrier a few times every week and her partner Brandi Streussel has her shop next to the Newser office.

And so, the Sunweaver Estates will see the biggest change in a while with two sim owners swapping sims and structures. And both will be exploring the new possibilities that the move allows them to take advantage of. The Sunweavers could very well see more flying and boating around in the near future.