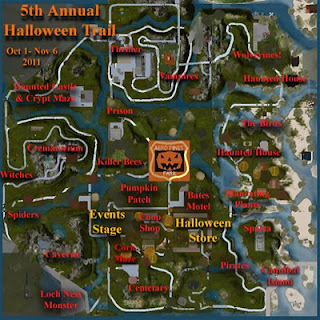 The Areo Pines Park area, usually known for horseback riding in the virtual countryside, has a different look for this Halloween season. For the fifth year in a row, it is offering it’s “Halloween Trail.”

The Halloween Trail takes full advantage of the ten sims of space, offering more than thirty exhibits. Some are a simple scare, such as a tribute to Alfred Hitchcock’s “The Birds.” But there are also larger and take a little time to go through. There are several haunted houses & castles, plus a haunted prison, in addition to a crypt and corn maze. Besides looking at them, there are levels of interactivity, such as being able to dig in the dirt at the Hiltop cemetery. Some are exhibits from previous trails, but there are some new ones.

Upon arrival at certain places in the sim, one is offered a notecard with teleports to various attractions. One can use the LMs, or just tour around on the Trail. The places are best seen at sunset or Midnight. 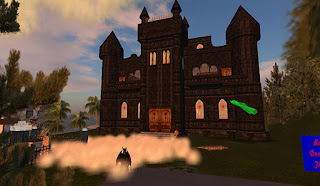 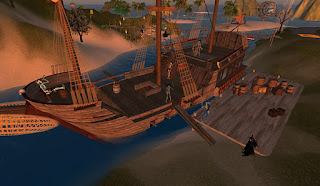 Some places offer a small gift, like the “Thriller Back Alley” giving you a Thriller AO. The Hilltop Crematorium is near Roxies Roadhouse, where one can get a motorbike, or a balloon ride. At various locations, one can rez a broom to ride around.

Besides the exhibits on the Trail, there are also events:

Basketball in Second Life: Changes at the VBA

Recently I came across some Internet chatter about the VBA, the organization of basketball teams in Second Life I wrote about last spring. Deciding to hear from the source, I send a notecard their way, and got a message from their co-founder Emerald Ishtari invited me to talk with her about what happened in the past few months. 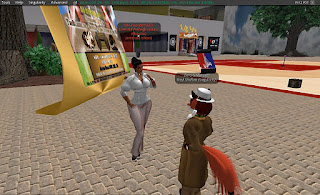 Emerald greeted me upon my arrival at the VBA’s Alpha Cold sim, and offered me a tour around. She pointed out the Recruitment Center. Asking her how things had been with the VBA, Emerald answered, “As with any business especially one as new to the grid as basketball, we have had our ups and downs.” One major change was the introduction of the Womens’ Virtual Basketball Association, or WVBA. But the results were less than ideal, “The response has been mixed. Women get excited to play then get apprehensive. So it has been up and down.”

She then ported to the Arena, sending me a TP after her, “This is the Alpha Cold Arena.” In their original one, there was a mall, so they “kept the concept” by having some stores around, “Game of the Week and special games, i.e. playoffs and finals, are played here.” To let fans know of upcoming games, people could cick on a “Subscribe-o-matic.”

Emerald told me they try to keep a family friendly environment, though she admitted there had been problems, “As with real-life, we have had to exercise the right to eject, as have team owners. Second Life has it’s share of ‘misbehaving’ people, and that ranges from blatant rudeness, to not abiding with league standards such as lowering their arc or turning off their mic..”

She showed me another court. Asked if it was a practice court, Emerald told me,”his court is used for (both) practice and games. Players are welcomed to come here anytime, as long as there isn't a game going.” She grinned, “some fall asleep here practicing.” 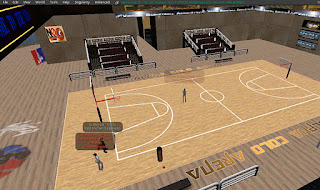 “This particular court is exclusive to the VBA. It is linked to our website and records stats of official games. It was a major project to get it just right, and I am happy it has come to fruition. The scripting had to be just right to record realistic stats. Not only team stats, but those of individual players as well. (smile) As a matter of fact anyone just wanting to try out the court can come here. It is open to anyone. Even a fox can play (grin), as long as they are the right height.” Emerald went on to say, “... the court forces the player to be the right height. ... we used the general range of real-life basketball pros.” The range was three inches.

At this point, we were joined by one of the VBA players, Valentino Fallen. Emerald introduced him, “Valentino is one of the players that comes here to practice at times.” Valentino explained, “Been with the league for a little bit, I was a member with the Bulls.” After a little talk, he went to the court, pressed a button, and the scoreboard announced, “Valentino Fallen has joined the H-O-R-S-E game.” Emerald told me it was a kind game on the court, “e spells out H-O-R-S-E to complete the game. Each made shot equates a letter. It is a great one person game. It’s also great for just horsing around, thus the name. (giggle)”

Emerald and I then headed to the Executive building. She showed me a special fountain that had been set up, “For Sept 11th, we put up a memorial reflecting fountain ... the Pentagon, World Trade Center, and the flag erected by the soldiers/firefighters.” She added it was just “a small gathering” whom where there for it’s unveiling, feeling perhaps more would be there next year. 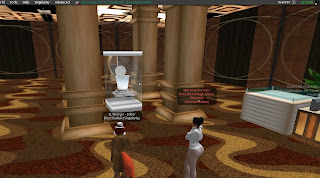 We headed into the Executive building’s main lobby, where the VBA championship trophy sat. The season was still going, delayed somewhat by Hurricane Irene, “some of our players were affected, so teams had to regroup. We had to reschedule approximately 10 games.” The playoffs most likely would be in November.

I asked a few more questions. Of the occasional female av with a male behind it, and vice-versa, Emerald told me they were acceptable as long as the avatars fit their league’s gender. She went on to say there were some teams up for sale, both from the VBA and WVBA.

Of the funnier moments/sports bloopers at the basketball games, Emerald mentioned, “Pre-game at the last game a spectator rezzed in nude. She didn’t know, there were little boys here, and they chased her until she teleported out. (laughter) Rezzing issues are the biggest bloopers, or the person who fell asleep on mic in the stands with a high arc, and I "tucked them in" by sending them home. (laughter) I think some players sang a lullabye.”

Emerald did say there was one sad development at the VBA, “We had a major shift in league ownership. My dear friend/co-owner/co-founder for personal reasons has for all intents and purposes left Second Life. On July 31st he and I finalized turning sole ownership of the league and all holdings over to me. ... It has been quite exhausting. When you grow accustomed to working with someone and suddenly they are not there anymore in any capacity, it can be overwhelming. ... to go from having him there at times, to no times, that has been a very difficult pill to swallow. I appreciate everything he did when he was here, and still does on his guest appearances, and we all wish him the best.”

Gemma Cleanslate has made a name for herself in Second Life's written media under Second Life Newser, and before that SL Newspaper. But yesterday, she got an appearance on Second Life television. She was invited to appear on Pookymedia's science game show "The 1st Question."

The show's webpage describe's the show as a "fast-paced, fact-based, fun (half) hour of science related merrymaking is the best quiz show on the web. Featuring audience participation, prizes, wit & wisdom. Pooky Amsterdam & Hydra Shaftoe make it all happen." With it's variety of science questions and trivia, it's been called "like having lunch with Albert Einstein." Three contestants answer various questions, some they try to beat one another to press the buzzer first. The highest score wins the show. Often, the show has a theme, such as all the contestents being musicians or in a certain brand of media. This Sunday, the theme was people from the Burn2 festival. 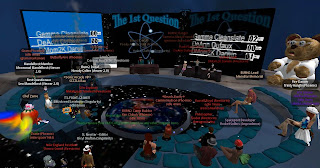 Reporters from SL Newspaper and Second Life Newser have appeared on the show before. Nazz Lane appeared a couple years ago on Sept 2009, and I appeared a few months before that in May, and more recently in July last year. Now this time, it was Gemma's turn. The two other contestants were DeAnn Dufaux, and DMom2K Darwin

The show had been planned to be at one of the Burn2 sims, but there were technical difficulties, and it was decided to move the show back to it's usual location in the Sci-Land sim of Spinthrift. Pooky's tiny friends performed some antics for the audience for a few minutes while she and Hydra got things ready for the show. 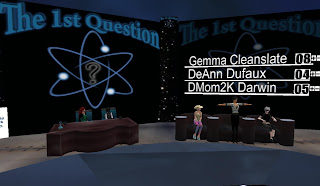 First was "Yay Me or Nay Me," in which the contestants were told of a supposed current science event in the news, and asked if it was true or false. Then came "Word-Up," where the contestants had to make up a word and it's definition, and then the audience would vote on which was best. Gemma's was "fishwhap," which she defined as "to slap someone with a fish instead of their hand." She told the audience that it was inspired by her time at the 7Seas Fishing matches. The other two contestants made up words of Second Life hijinxs. Gemma's word tied for first.

Gemma took an an early lead in the score. The others tried to catch up, but Gemma kept on the pressure. She won the match. Gemma was later awarded a prize by Pooky.

Pooky Amsterdam had a little sad news for the audience once the show was over. "The 1st Question" was switching from a weekly show to a monthly one for at least the rest of the year.

Sunday's show should be available for viewing in a few days, both on "the 1st Question" webpage and the Treet.tv archives.

And Gemma, you never told us what a nice voice you have.

*Addition* And here's the video: