Wednesday June 30 was the last day of the 2021 Relay season, and the last the Relay kiosks were accepting donations. Usually there's an official "Relay Wrap-Up" event at the season's end in which the Spirit of Relay winners are announced. This year, the announcements were done at the "Sink the Sims/Flood Party." So no last event at the seasons end was scheduled. But the Relayers held one anyway. Their season total was already close to the highest they ever made, a couple thousand USD short of the $415,000  that was made in 2014. So they decided to hold one last, and unofficial, event, to beat the record. 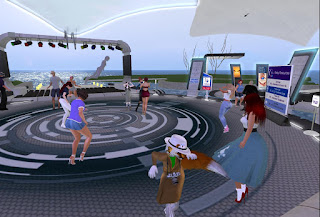 So without any plan, people began gathering at the American Cancer Society sim. A kiosk was rezzed, and people began dancing away as Trader Whiplash was playing T-1 Radio for the Relay one last night. There was plenty of encouragement to donate in both the group chat and the Discord channel. Finally, Stingray Rainmaker announced the goal had been reached. Congratulations to everyone involved in the American Cancer Society in Second Life for making our 2020-2021 fundraising year the most successful we've ever had in our 16-year history in the virtual world. This achievement is a testament to how strong our community is and how dedicated we are to funding the lifesaving mission of the American Cancer Society.

Every moment throughout this year, you've reached goals, set new goals, and reached them, ultimately leading to this moment where you've now set a new fundraising record in Second Life. Thank you all for being the passionate, competitive, proud, and unique cancer-fighting warriors that you are.

The total would continue to rise, eventually reaching  $417,122. The people would also continue to dance and congratulate each other for a job well done. Fireworks were going off over the sim. The partying would go on until shortly after 7PM SL time, with Trader Whiplash signing off for the last time this season, "Good night Relay."

After the event, the kiosks were turned off, and would show only off-season totals. On the website, the team totals page was redone so the 149 individual teams no longer showed. 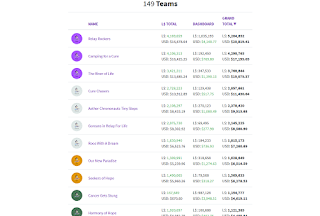 Posted by Bixyl Shuftan at 11:55 PM No comments: