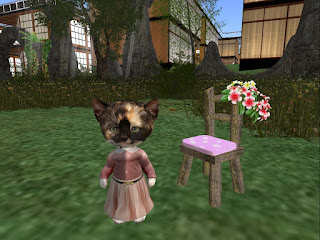 Marcel Mossword began writing for the Newser a few months ago. To begin with, I had already known her some as not only is she a fellow reporter, but also my neighbor at Cape Heron. We recently met to talk about her time at the paper so far.

Passing  my congratulations to Marcel about becoming the new reporter for the SL Newser, Marcel told me,  “Thank you.  I like my new job.” She smiled, and went on to say she plans on writing,  “as long as I can have my SL account.”

I asked Marcel about her goal as a reporter.  “I like to let people know the news on Second Life,” she replied, “I want people to know the news in Second Life in depth, that's why I like to take one side of an event, not just the publication side.” Marcel went on to say she doesn't play on making this a real-life career, “I don't have a plan to become a reporter in real life.”


Besides being a reporter, Marcel is a skilled artist here in Second Life, “My main goal is to bring art to SL from our remote area and to learn about building and collaborate with people.” She also  considers Second Life to be a good place to learn to write and have collaboration with other writers.

Marcel currently has an exhibition at the sci-fi fair.  Her exhibition is mentioned on the sci fi blog:
https://art2048.blogspot.com

Marcel is an animal lover, who has three cats in real life. Her profile describes her in real life as a painter, illustrator, writer, and "homeschool mom." She is married to Iggy Tachikawa in both real life and Second Life.


A month ago I joined this group of SL reporters, the SL Newser. I learned so much from my new job. I'm an RL writer since years ago, but I never did a reporter job who reports events or people.

When I do my job, I combine my knowledge of various news reports with my interest in humanity (I'm a psychologist in RL

:D ). So that I not only produce an article about the event itself, but also the human side of the event. Such as motivation, fatigue, teamwork, inspiration, emotion, etc.

I enjoy being among the SL Newser's media team, where the fellow reporters are very fun, creative and passionate.
Posted by Bixyl Shuftan at 6:00 AM No comments: 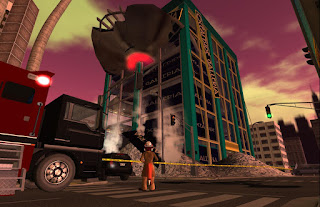 It's been about six months since Montecito Bay was hit by a strange craft that resembled a flying saucer. Although the area was under guard by the police, Federal authorities delayed in getting the "UFO" out of there until shortly after the Newser wrote about getting a closer look at the saucer and what looked like the body of it's occupant. With the craft and remains taken away, a mystery tower suddenly springing up in place of the destroyed building, and an official speaking on condition of anonymity about what was going on in late March, that seemed like the end of the story.

Aside from the supposed aliens themselves however, there was one party that hadn't spoken up yet: the military. This week, the Newser received the following letter

Regarding your reporting not long ago on certain incidents in the town of Montecito Bay, your articles did not go well within certain circles. Fortunately for you, your publication has made repeated efforts to help veterans. Because of this and the "understanding" you have with the local police department, there will be no efforts at prosecution.

However, your recent reports suggesting that the community of Montecito Bay was the subject of several activities of extraterrestrial origin, notably the crash landing of a craft of stated extraterrestrial origin, have forced us to declassify certain documents concerning an experimental craft sooner than planned in order to avoid unnecessary alarm. 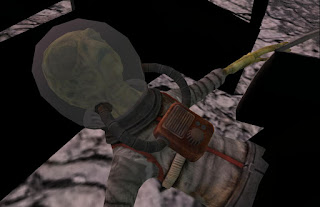 As your investigations revealed, we have made efforts decades ago to see if a craft in the design of the "flying saucer" seen in vintage science-fiction movies was feasible, and were disappointed by the results. Today with more advanced computer technology, the decision was made to try again with a new design similar to the old one, but with the addition of computers not dissimilar to those aboard the B-2 bomber to help keep it stable. It was also decided to have the initial flights unmanned, and a mannequin placed in the cockpit in place of a human. As crewmen will do things for amusement, the mannequin placed was deliberately made to look like a green alien from classic science-fiction movies.

We did not anticipate our X-craft loosing the signal of it's controllers as we had two back-up signalers. But somehow all three failed, and the result was the X-craft drifting into the town of Montecito Bay, and smashing into one of it's buildings. When the mannequin was removed from the craft, for some reason it was decided by local servicemen to temporarily place it in the wrecked car in front of the building. No one anticipated local police going on "lunch break" to let in reporters they were on friendly relations with.

We would appreciate patience in the future in regards to any of our recovery operations, and allow us to declassify reports and parts of them at our own pace rather than give away our secrets so that the enemies of this nation will exploit them sooner..

The Newser tried to call General Black at the return address, but there was no response.

So it seems there's now an official reason other than "swamp gas," and a plausible one. That is, if that's all that happened. This explanation says nothing about the strange symbols with a resemblance to crop circles that were appearing on the city streets or the "Groundhog Day" incident in which half a city block was demolished with the only clue being what looked like a flying saucer zooming away. And of course no explanation of the "alien tower" that now stands where the UFO crashed.

It's also interesting to note that this letter has arrived in a period of relative calm for Montecito Bay, meaning while weird things still happen, they've all been under the radar. How long this will continue, we'll see.

Note: The preceding was a fun article written for the purposes of entertainment.
Posted by Bixyl Shuftan at 6:00 AM No comments: