The Sim The Lab Wouldn't Close

Lately, there have been a number of sims either closed down, almost closed down, or slated to be shut down. But the Newser was recently informed of a sim Linden Lab wouldn't close, despite the wishes of the owner.

In late September, I was contacted by Annie Brightstar. She told me about the MIC sim, and the troubles it's owner was having. Known as Marina MexiLane Bellini, she posted about her problems on Facebook. Annie used a translation program for her post. 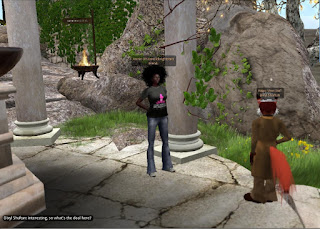 The seriousness of Linden Lab.

As you know I've asked, via the form on the website of SL, the offline the sim mic on 17 July, specifying that I could no longer support the sim card. After an exchange of mail on the part of the support, in which I was advised to "find the money", That much to put offline the sim we wanted to "15 days and also much more", I reiterated that mic would come only with a new project funded by the Italian institutions, because I could not afford to pay for that rata every month.

All this time mic was online and only a few days ago I found out that they were asking for 600 $ arrears, in practice for the instalments 18-July / 18 August and 18 August / September 18 . Not only. The month of August I paid the monthly fee avatar premium but was rejected. Now the account is suspended, gone, deleted, and I can't interact with them by the owner (meximic chant).

The sim continues to stay on, but at this point I think it is an embezzlement, given that the earth is my property as all the rest.

In my shoes, how would you behave? 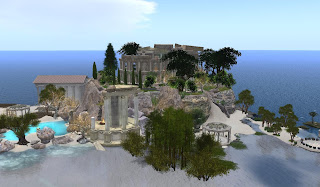 Deciding to check things out, I looked around. The place was a well-designed island with  builds of Ancient Roman architecture among the rocks and trees. One building served as the location for a store, another as an art gallery. It didn't take me long to find a gathering of people, and I went over. I found a "Mexi Lane" chatting with a couple men in Italian. I greeted them, and explained why I was there. She explained, through a translator, "This is a place (for) cultural events, especially art exhibitions and museums of Rome. ... I apologize for the inconvenience translator."

Mexi explained that the place, "was always a sim quiet and very successful." It had been up for over five years, "I've SL projected on screens in Rome, Capitoline Museums, Congress Palace, Biblioteca Angelica, all of Rome knew." It was advertising and exposure for the artists. 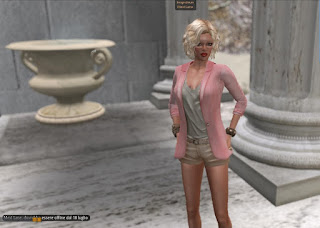 But unfortunately her economic situation changed. She came to the conclusion she could not keep up the teir payments, "It could not be paid by July 18 and asked the offline (on the) 17. LL tried to convince me to stay and find the money, but if the money is not there you do not find on the street. And I said 'no, I want the sim offline.' LL closed the ticket, and two months later I found out that they asked me two months to charge and account owner deleted." Talking to her more, she explained the account deleted was an alt "used only for transactions and management."

"The sim is still on, and I do not know what they want to do." She mentioned, "MIC is among the 25 selected for the sim card with the oculus Rift." I asked if she thought that might be a factor in their not closing the place. "It can be one of the reasons," she answered, but she thought the real reason was money, trying to get as much off her as they could. 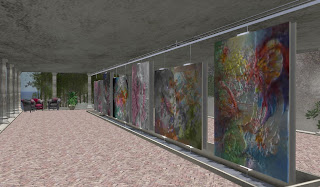 Despite her problems, Mexi continued to help out others, "Yesterday the owner of Fashion Week, I was responsible for making the video teaser of their event. I'm here to serve the community." But she was still working on her problem, "I must write to LL as a guest and specify my ticket. It was opened on July 17. ... if they offer a service (for residents) to request (their sim) offline, must comply with the requirements of users and not to be clever. I do not have $600 to give to them." She did say some Italian institutions owed her money, but "it is not known when they will give them to me."

It was about then that we parted. Some days later, she posted on her Facebook page an image of her sim on a map, tinted red meaning offline, "Biggies: They did it to put the MIC offline! 2 months and a half after my request." I sent her a message about it, and she reaffirmed the sim was still down. It was not yet clear whether her bill was also nullified, and her alt account restored, but she wouldn not be billed aditional money.

So the sim that the Lab wouldn't take down finally was closed.