All across the web, these days, you don't have to go very far in, to find anything about depression, suicide, or mental health. I for one suffer from it as well. However, what most people don't realize, is that a good, and free, way to help them out, even slightly, is staring them in the face. 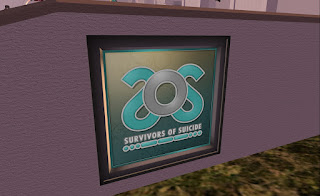 Nearly 350 million people suffer from depression all across the world. Depression can be anywhere from minor, to severe. The textbook definition of depression is, feelings of severe despondency and dejection. However, the condition can be far worse than just some definition, bed-ridding some of its sufferers. However, this reporter is one of many, who have found ways to combat it. Some of these ways include hanging out with friends, others include traveling. But what if you don't really have friends in the real world? What if you don't have enough money to travel? What happens then? Do you just sit and despair? Well worry not, for Second Life could be your treatment. 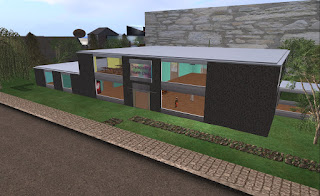 Second life has nearly 37 million players. There are nearly 25000 sims all around the grid. These sims range from arts to music, to roleplay, to shopping. Second Life has been described as the largest online virtual world. Being that, it can easily be seen how there is literally anything for anyone, and everyone. A lot of people have used this to their advantage, and have even made progress, in combating their own mental disorders. And even if you're just looking for support, you can find that nearly everywhere you go. There are even hundreds of groups, simply designed, for the sole purpose of giving people support for anything they have.

Editor's Note: Besides the Survivors of Suicide, which the Newser wrote about a few months ago, there are other places which say they offer mental health services. The only 0ther one I've talked to is Tranquility Health Care in Sorens (87/120/21), which has only recently come about.

After the apology came in, I thought that would be the last time I would write about the topic. But more people had something to say.

The issue started on December 31 When Team Diabetes posted on their blog that someone spammed their group chat saying his breedable group was doing an auction in which the proceeds would go to Team Diabetes. The Second Life charity was doing a fundraising event at the time with another breedables company at the time, so this may have caused a little confusion to the donors. While the man stated he had raised over 100,000 Lindens, about $400 USD, going to charity, Team Diabetes never got any of it, and asked people to start making inquires where the money went. The Newser talked to Vee Tammas Shocker (Veruca Tammas) of Team Diabetes, and was told Oenneo Resident was the one whom had spammed their group chat. I messaged him about the issue, but didn't get a response so went ahead and published the story on January 8.

The response was messages from Oenneo's partner at the time, LoriLynnGrimes Resident, some an outpouring of anger, and the more cordial one saying we should have contacted her and that the money had gone directly to the American Diabetes Association without going through Team Diabetes. I would also get two angry messages from supporters from her. As they were just minutes apart, I wondered if they were alts. Then later on Lori would send a note of apology to Team Diabetes, saying Oenneo confessed that the money never went to charity but to pay for a building, adding the breedables company she and "Neo" were in was dissolved along with their partnership and she planned to somehow make amends. But when the Newser wrote about her statement, she angrily responded that the message was intended to be private.

Some days later, I would get messaged by two people about the issue. One was a supporter of Lori, but in contrast to the earlier people whom were hostile, she made an effort to be friendly, though did ask to remain anonymous. She claimed Lori was no swindler but had been swindled herself by Neo and his supporters. She told me Lori was starting to pay the money to the American Diabetes Association over time in segments, though didn't have any proof as it would mean revealing her real-life identity. 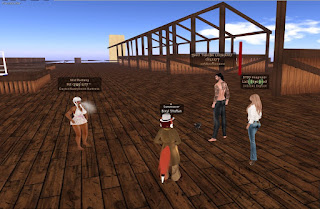 I wasn't sure if this by itself warranted an update, telling her I probably wouldn't do one yet. Then later that evening I was contacted by Lady Digs Jewel (1x1x141 Digfoot). Digs told me she was the builder of the building mentioned in Lori's statement of apology, "The Ark." Lady Digs felt she was "dragged through the mud" by the insinuations she was involved in a charity fraud by association, "I did not receive embezzled funds, because it was paid for well before the event." She sent me a picture of a page of Oenneo's transaction history, which was dated several days before the incident with Team Diabetes and labeled "Final Payment for Ark."

She then told me Oenneo was there with her on the Ark, still under construction, and offered to TP me over. And so I was face to face with the man whom had caused Team Diabetes so much concern. Neo would only converse with me in voice, so the only records I had were the notes I managed to type. The bare-chested man claimed he never got my messages, saying his messages were likely capped, "I have only this to say, I never touched any of the funds. ... The Ark was paid for my money and my money alone." 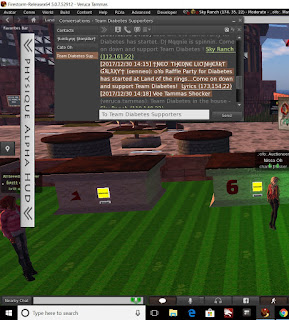 When I asked about Team Diabetes saying he spammed their chat about his event, he at first told me, "That is completely false, that never happened. ...  I only IMed one person. ... I never spamed any chats, period." I then handed him a copy of the picture that had been earlier sent to me by Vee Tammas contradicting his story, showing he had messaged their chat. He then tried to backtrack, "I did send notices during the event ... but not the 100,000."

Later on, Digs would contact me again. We chatted for a while, and she stated she wasn't trying to imply that she thought I was unfair to her, only that the statement I published could be seen by some as implicating her. This wasn't my intention, and the evidence I've been shown points out she was paid before the incident in question.

I emailed Vee Tammas about the two contacts. She responded that even though the builder had evidence she was not involved in the incident, she felt there were no reasons to take either Oenneo or Lori at their word, "Neo" having been caught in a lie and Lori having a history of responding angrily when confronted and having no evidence of her wanting to make amends. While Neo might not have paid for the building with the money in question, he still collected it from Team Diabetes supporters.

The Newser has written about controversial topics before, such as Monkey Wonder and Voodoo's threats to the Greenzone group. But seldom has information kept coming in about one like this. So what happens next? Time will tell.