Oldesoul Eldemar is a noted figure with the Relay. Though with the him taking part in the recent Fantasy Faire as a tiny member of the "Pawlice" arresting people for the various "jail and bail" events, it may have only been a matter of time before someone decided turnabout was fair play. And on the night of Saturday May 22, that happened. 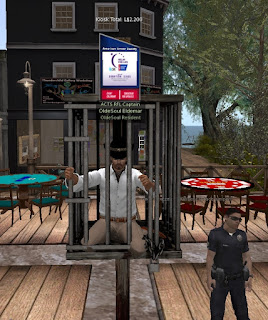 At 6:31PM on the Relay for Life Volunteers group chat, Selene (Selene Jashan) called out, "Heyyyy Olde??????  We have a warrant out for your arrest!!!! Reason for Arrest: Many, many, pawsome acts of Relay." The warrant had been issued by her and Gem Sunkiller-Shadow, "Don't make me suit up and come for you, buddy!" Wateru Kohime announced, "I've got $L100 I can put towards Olde, for keeping him in longer that is." Olde couldn't believe it, "Wateru, I have been soo kind to you." Wateru and Gem just laughed in response, "I am evil tonight Olde." Wateru then conceeded, "Ok fine, I've got another $L100 to get him out too. So you break even." Selene laughed, "Uumm he needs a lot more than 100L."

Gem commented, "We will need to put you in the cell, and lock the door.  I'm sure you have friends who can front your bail. Selene laughed once more, "He needs 4k." Time went on, with the chatter turning to the Sunbeamer's Medieval Fun Fest at times, and Selene encouraged people to donate, "Who is going to come help bail OldeSoul out of jail, I know lots of you will come look just out of curiousity!" Gem added, "He looks so sad!"

It was then Selene posted a link to a picture in Relay Chat, that of Oldesoul in a tiny cage not tall enough for him to stand up in, with a policeman bot standing by, "Has his own personal guard." Cynthia Farshore of team Sunbeamers mused, "He looks right at home," then she went to the point, "I'm DJing, so stuck here. Where do I toss a remote?" Oldesoul answered, "Gem Sunkiller or Selene." Cynthia then sent the cash, with Olde saying, "Thank you Cynthia. I am free!" The Sunweaver answered, "Welcome, but warning if you show up at the Sunbeamer Medieval Fair you may be arrested there too!!"

Selene is with the River of Life Relay team. Gem is the Relay for Life's Season Lead for 2021.

As luck would have it, or perhaps Cynthia's suggestion, this was not the end of Oldesoul's troubles. At the second day of the Medieval Fun Festival the following day, the Sunbeamer's captain Rita Mariner announced in Relay chat, "Olde, you are to report to Caledon Downs immediately, You are under arrest.  For bribery of waffles to tinies and Patch Linden almost being eaten by a teddy bear." The charges were about the antics of the "Pawlice" at the Fantasy Faire, notably Patch Linden's jail and bail inside the belly of a giant teddy. Nance Clowes asked, "Whats it gunna take to bail out ... Olde?" Rita answered, "After Olde spend time in my gibbet, we can talk 'bail/ Bribe.'" Olde's response was, "Ms. Rita - I am meeting with my build team, may I make a rain date?" Cynthia commented, "Evasion from the law, another charge!" Rita's response was, "Yes, now life in my gibbet." Olde countered, "Have you spent time with my builders?" Rita answered, "No, but I can lock them up with you." "You know them, silly one! I will be down in a bit." 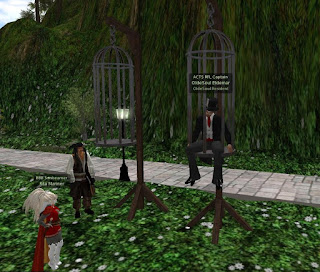 Eventually, Olde announced he was ready, to which Alison Flow went, "Lock him up!" Gem Sunkiller grinned wickedly, "Who are we locking up now?" At Caledon Downs, Olde showed up and Rita showed him the cage, "Ok criminal, in you go." Cynthia was there, "HAAAA nab him!" Olde went in, "Welcome friends, I think." "So until someone feels pity on you and pays the crown to bail you out." Then Rita got some Lindens from someone, but not to bail out, "Oh my you really upset someone. They paid extra to extend your stay." It was then Gem Sunkiller showed up. "Hi Gem," Rita greeted her, "It has to be a HIGH BAIL! Some one paid extra to keep him locked up longer." Olde tried to look sympathetic, "We are friends - and I just spent hours with your friends." "Need at least 3000L to bail him out. Is he worth it? ... They paid 2500L to lock you up, 3000L to bail you out."

In Relay chat, Nance mused, "I heard Bixyl has been saving up for seven years in case he needed to be bailed out." Gem mused at the sight of Olde, "Awwwww, hanging in a birdie cage." Cynthia added, "Well well now lookey what we have here. We got Olde in the pookey, Looks like he is in bad need of help right now . Caledon Downs (49,163,23)." Olde called out to a friend, "Trader - have a Linden?"

Back at Downs, Olde stated, "Someone decided you have been soo kind to ACTS." After a moment, Rita announced, "Ok, bail is paid, your debt to the crown is settled, your free to leave." Olde stated as he got out, "They paid the rest. Off to work." "You are now free to enjoy the faire." "Thank you ladies and gents." "Free to go," one other spoke, "at least until we hear about any other waffle incidents."

So Olde was part of two jail and bail events that brought in a total of 7000 Lindens, the 4000L going to Team Sunbeamers part of their two day total of 73,675 Lindens (117,675L going to the 'beamers and Roos With A Dream teams combined). How long will the suffering Oldesoul Eldemar avoid any more "cagey" feelings? Time will tell.