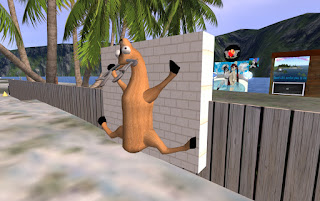 When Christmas comes to Second Life, many decorate their areas with snow and a Christmas tree, or other simple decorations such as wreaths and candy canes. And then there's Nydia Tungsten, the owner of the "Happy Vixen," the beach club of the Sunweaver/Angels community. While gift-giving is fun, the crass commercialism and stress can take the happiness out of the holiday. So she tries to have a little fun with her "Twisted Christmas" music set every season, filled with parody songs from mild to wild as an answer to "Fa-la-la-la" played 24/7 in every other shopping center.

But this year, she did a little more. She decorated the beach club with some off-kilter Christmas decorations that were definitely not for child avatars. There was "Santa and the drunken reindeer," which had the not so jolly old elf and his sleigh having wiped out, and the reindeer were all splat on the ground or on the fence, except one that was taking a piddle on Kris Kringle. There were a couple reindeer on the rooftop "romantically engaged." There was one outhouse labeled "Santa's Office: Knock First" where Santa was having to answer a call of nature, "Ho ho ho! Could I have a little privacy?" About the only thing that looked G-rated at first glance was one snowman on the side of the dance floor. But before long, you'd hear cheesy pick-up lines from him. This was "Frisky the Snowman." 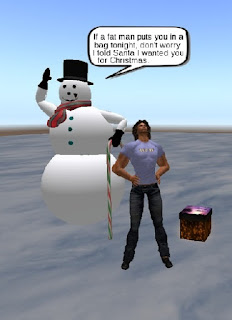 "Frisky the Snowman" wasn't something she had a friend do, but had bought it from a store owner. Taking a look at the Marketplace page, "Frisky the Flirty Snowman" was sold by a Connor71, "For many, me included, holidays... particularly Christmas can be a bit depressing for us at times depending on our given situation. Frisky was my answer to add a few smiles, and I certainly had several ear to ear grins making him.  I really hope he can spread some cheer to everyone."

Connor had boasted Frisky had "Over 100 come ons." And he never seemed to run out as at events, he relentlessly spouted one after another, "Do you have a quarter? Mom asked me to call her if I ever fell in love." "Look at you, with all those curves, and me with no brakes." "Is God missing an angel? You look like you fell from Heaven." Some could be a little creepy, "If a fat man puts you in a bad tonight, don't worry. I told Santa I wanted you for Christmas." "You can take me home, or I can follow you home, your choice." 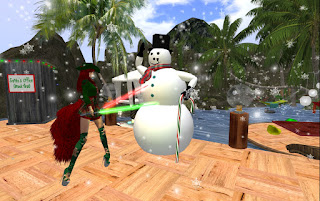 The reaction from the women was what one might expect in this day of news headlines of sexual harassment stories. A few laughed, some groaned, some growled, and a number made jokes about how to dispose of the perverted snowman. Frequent ideas were shoving him into the water or grabbing a flamethrower and blasting him. One girl posed in front of him with a couple lightsabers, red and green to match the Christmas season. They couldn't of course. Only the Happy Vixen staff had the power to do anything about him.

So what did I think? As a guy, he reminded me of the examples I had while growing up of how *not* to ask women out. But as the years went on, and I remained single, guys (in real life) kept telling me I needed to be more pushy, "You need to start reaching out and grabbing some ***s." I sometimes wonder if they were seeing if I'd had a mental lapse and actually do it. Then again, they had reproduced (or rather a number of them had), I hadn't. So maybe there was *something* to the strategy of one lame pickup line after another. And then there was the story I read years ago about a woman whom claimed the ghost of a guy was not only haunting her house, but going after her. The exorcist she called to get rid of him told her he was a lonely soul who never had luck with women and in death was continuing what he was trying in life. 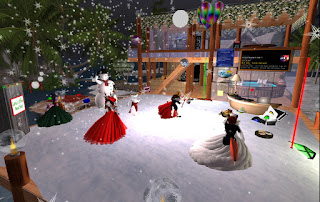 Eventually came the night of Nydia's "Twisted Christmas" set, in which she played her parodies for two hours, from mild, to wild to, "Oh my God, what was he thinking?!" And Frisky was relentlessly giving out one pickup line after another so cheesy one could smell the parmesan. One girl commented they were more like limburger. As usual, they joked about how to melt him, but the snowman didn't notice, or didn't care, continuing his lame lines, "Hottie alert! I'm melting!" "I put your picture up at the post office, 'cause you're wanted by me." Like that *one guy* at certain parties, you weren't sure if he kept hoping some girl would finally answer his love calls, or he wasn't doing it to get entertainment, but that the cat-calls were entertainment in themselves.

The following day, the decorations Nydia had put up for "Twisted Christmas" were all gone. This included Frisky. A few girls acted happy that the snowman was gone. When I asked Nydia what happened to him, she answered, "I melted him, with a flamethrower." So what cheesy pickup line drove her over the edge? She wouldn't say.

The snowman is gone, but no doubt he'll be remembered.

Frisky the Snowman,
Was a perverted skirt-chasing soul,
With a candy-striped cane, and a stovepipe hat,
He cat-called with a leer made out of coal.

Oh how the women,
Hated each cheesy pick-up line.
They talked about how to melt him down.
To him, he was a load of slime.

As for yours truly,
I too felt he was a butt.
But you have to admit, he wouldn't quit,
For his passion, he never gave up.

Then one morning,
Frisky the Snowman had gone away.
The women cheered, but I was a little sad,
Deep down, I'd hoped he'd get one chance to play.

Image Credit: Connor07
Posted by Bixyl Shuftan at 6:00 AM No comments:

My Last Article For SL Newser 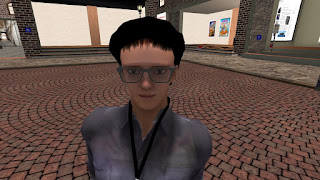 I joined Second Life Newser in July 2014 after searching for a virtual newspaper to write for in Second Life.

My virtual journalism career started around the year 2000, when I was member of a virtual world called Cybertown.com ( it doesn’t exist anymore nowadays ). At the time I saw an ad where they were looking for writers at CVN ( Cybertown Virtual News ). I decided to send in an article that I wrote and I thought by myself “here goes nothing.” But after a while, the editor emailed me back that the article was good enough for publication. I must admit that I was a bit blown away by the fact that my article was accepted anyhow.

After a few years of learning the basics of Second Life, I found out that SL Newspaper, owned by James T. Juno, was looking for writers. I then made the decision to join his team and write articles for them. But I lost interest in Second Life a while after that and decided to leave Second Life for a while. I briefly came back in 2012, but I didn’t find any virtual newspaper again and I learned that SL Newspaper was no longer existing.

In July 2014, I found out that SL Newser, owned by Bixyl Shuftan, was writing about Second Life. I decided to join them and I have been writing for them ever since, until now.


Today ( December 13 th, 2017 ) I wrote my goodbye article and I will move on. I hope this career switch will be a good one, we will see what happens.

I would like to thank the crew of SL Newser, and especially Bixyl Shuftan, for letting me part of their team and write with them. I sincerely greet you, the readers, for reading my articles and enjoying the things I have written about.

So, I say farewell to SL Newser and I hope that the virtual newspaper SL Newser will continue to grow and will expand in the near future.