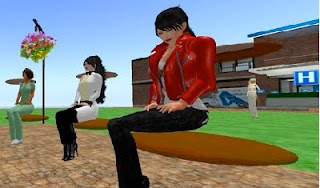 Despite heavy RL snow, eager college students flock to first-day nursing classes at Second Life's UNCP Campus (Picture 1). Telecommuting and virtually present for class, these students are starting an intense learning experience: 12 hour days in Second Life, rehearsing every conceivable future medical situation they will encounter in real life (RL). During my visit to the SL Hospital for Nursing, coeds entirely new to Second Life (SL) were having a wonderful time modeling their virtual nursing uniforms and learning to navigate virtual life. 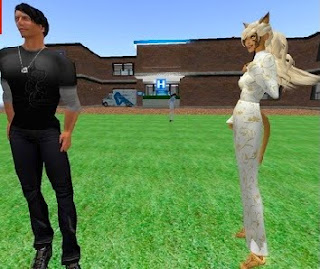 Each year, Dr. Curtis hosts the Teaching and Learning with Technology Conference (TLTC), drawing over 1000 participants in this entirely SL-based academic symposium. On his extensive UNCP in SL web, Dr. Curtis explains his SL activities and about UNCP, a public state university with about 7000 RL students and a large nursing program.

Surprisingly, there are almost 1000 universities engaged in SL, some with massive footprints, dozens of sims. Imagine... projects like UNCP in SL X 1000! Of course many are young programs, and very few are likely to compare with what UNCP has achieved in only 3 years in SL. Virtual education is an exciting endeavor, with new possibilities, and enthusiastic faculty and students fearlessly immersing themselves in virtual worlds.

SL Hospital for Nursing and SL UNCP on the web: http://www.uncp.edu/home/acurtis/NewMedia/SecondLife/HospitalForNursing.html

About Teaching and Learning with Technology Conferences (TLTC): http://conference.unctlt.org/ (This message from Dr. Curtis) 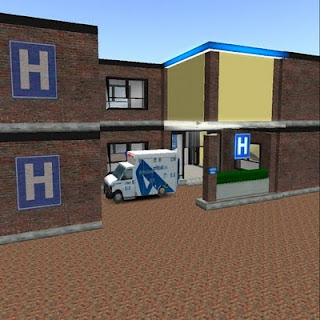 The 2011 UNC Teaching and Learning with Technology Conference will be April 12-14 in Second Life. Theme: "Learning Forward: Teaching Technologies for Engaged Learners."

Held since 2000 about effective use of technology and learning environments face-to-face and online, the TLTC has topics of interest to education professionals regardless of grade level or geographic location, from effective practices to emerging technologies. We anticipate participation by faculty and staff from UNC system, NC community colleges, other private colleges and K-12 educators from anywhere in North Carolina and beyond.

Watch for registration and proposal deadlines on the web http://conference.unctlt.org/. Registration is free. TLT Conference is hosted by UNC-Pembroke. Presentations will be primarily on the NC Education islands funded by the community college system. I hope you will want to present or view presentations. Please send me any any questions and feel free to share this announcement. Thanks!

Another Look at Inworldz

The first time I took a look at one of the alternative virtual worlds some friends were talking about, Inworldz, the results were disappointing, not able to stay on longer than a minute before crashing. After a while, I checked again, finding both Inworldz had done some updates. As before, Inworldz’ own viewer didn’t work for me. But the Imprudence did, and this time it stayed on. I was able to go about the Inworldz entry sim, called “Inworldz Desert Island.”

Starting out, I was in a bald, female avie with red pants and shoeless. Fortunately, I was able to create some clothes, with a little help from a texture package on me, so was soon able to upgrade my look from newbie to newcomer. Looking around, I found a freebie place aimed at male avatars, Man Icons at (82, 215, 22). For the women, there is The Feminine Coil at (145, 211, 22). I found a few gestures, male skins, of which I chose a dark tone, and hair pieces. Not exactly my familiar foxy self, but still a couple steps up from where I started.

The place certainly looked like the Second Life grid, at least with this Imprudence viewer. Checking the map, it did look a little different. There were a few times it crashed again, notably when I tried to get the profile of someone else. So perhaps there are no profiles here.

Finding an Inworldz guide in the shop, I took a look at the notecards for other places. A few places were definitely aimed at the adult crowd. But there were plenty of others. The ROMA group from SL had a presence here, as did the tinies of Ragalan Shire.

But further exploring in Inworldz will wait for another day. I’l look again soon. Sooner if someone can tell me how I can be my familiar self here.