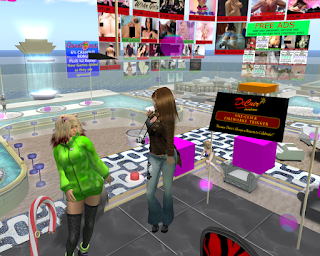 Shortly after joining SL, six years ago, I got my first job as a dancer in an adult club called Escort Oasis. I went to the club to dance and enjoyed the music, friendship and generous tips. Having avoided the "Escort" side of the business, I left with only fond memories of the club. I am still a member and return to my "Alma Mater," for fun, now and then. Recently, while at a party at Club Cutlass, I got a group chat from Escort Oasis. The owner, Jenwen Walpole was explaining the plight that many new, smaller clubs were experiencing. Jen emphasized that her concerns were not for her club, but rather for those trying to start new clubs, as she did eight years ago. Because I share Jen's desire to make SL a fun and profitable experience for every one of it's residents, I quickly volunteered to help get this story to a larger audience, by way of an article in the Newser.

When my party ended, I flew to Escort Oasis and joined Jen in the overhead control booth. We talked a while and she gave me a notecard, which explained the problem. I have cleaned up the typos, written in haste, while managing a large club, and submit it below, in the hope that bringing it to public attention will aid in solving the problem of robots taking over SL.

Recently quite a few clubs and venues have closed in SL. A few old favorites and quite a few newer ones. A few of these clubs and venues were great places. Their only issue is that their traffic never really grew  even though they put great efforts in getting the word out. They ultimately failed due to low revenue streams from advertisers and a general decline in clients throughout SL.

The negative impact is that first, and newer users to SL, going to these places with fake traffic are greeted by inferior clubs with very few people in them or even worse, a room full of non responsive bots. This ultimately turns them off to adult SL. We loose a lot of newer users this way. Second is that newer clubs with great concepts, and great staff never get a chance to succeed because they are over shadowed by those that cheat the system.

What is a bot? A bot is just an unattended avatar logged in usually using some kind of text based client.

A typical location using bots to boost traffic will have 20-40 bots. How much does this increase traffic? 30 bots adds over 43,200 to their traffic score. So, a location that would normally have 10,000 in traffic, will show as 53,200 and be near the top of the search.

Is the use of bots against terms of service, yes, and SL is supposed to be policing it, but the reality is they do not. Also, reports of places using these bots seem to be ignored by second life. There are locations that have been using bots for years with no response from sl.

The reality is that use of bots not only benefits the places using them at the expense of those who do not, but it adds to SL's bottom line for number of concurrent users, increasing the apparent usership of SL. It is generality believed that because of SL's usership decline that there is little incentive for sl to police this.
This practice is killing the adult world in particular. The potential clients that the adult community counts on get fed up with the faked  traffic and poorer quality than the numbers would suggest. This leads to a decline in the persons we need to keep adult SL going and thriving.

Are there legitimate uses for bots? Sure. and SL actually has a facility to mark an avatar as a "scripted agent" so it doesn't count as traffic. However most do not do this, and would be counter to the whole purpose of using a bot to increase traffic.

What can be done? Well education is key.

Advertisers who patronize those locations using bots should be made aware of the negative impact they have on patronizing places that use bots.

Performers should be aware that their support of locations that use bots is hurting adult SL and will ultimately lead to more difficult times in finding clients.

Clients should be informed that these places are not the norm, and that very good places exists that have real traffic. and be encouraged to explore and question traffic numbers. Removing the incentives of revenue and support for false traffic by the community will deter those who use bots in the adult community.

We could start a campaign to report such places to SL. However many feel this would fall on already deaf ears. For those wanting to do that, reports should be filed under the help/report abuse, in your client.
* * * * *
Editor's Note: On Becky Shamen's blog, there were a number of comments to her article, which was originally printed there. To check them out, click here.
Posted by Bixyl Shuftan at 6:00 AM 4 comments: