So, like many people who are interested in the Elder Scrolls series, I recently got Skyrim (the 5th in the series). It's supposed to be "cutting edge", the best thing out there graphics- wise, etc. etc. etc. However, from my experiences, it doesn't seem to live up to the hype much. 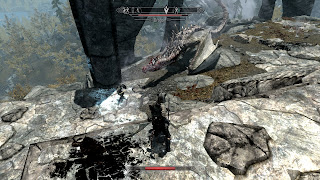 The story goes that you're captured and set to be executed, when a dragon decides to make itself known and ruin the proceedings after being sealed away for so long. Once you escape and do a little investigation, you're sent to kill another dragon, and it is there you learn you're "dragonborn," able to use the "shouts" of the dragons. From there, you're off across the realm doing quests and slaying yet MORE dragons while you uncover the richness that is Skyrim.

And rich it is. It has a LOT of realism to it, and the graphics are just beautiful. The rivers and streams are beautifully rendered, there's a lot of background ambiance in the towns, you can capture bugs with your bare hands for alchemy ingredients or snag fish out of streams, and I don't know how many times I've -slowly- edged into a cave, fearful of all the sounds and worried that something's going to jump out at me and eat my face in. Dragons can attack at random in real time, diving out of the sky and surprising you if you're not paying attention to your surroundings. If it's one thing the creators of Skyrim at Bethesda got right, it's the graphics. They also have what is known as the "Radiant" quest system, where your actions influence what quests become available. If there's a bandit group in one cavern and you clean it out before the quest can be given, then the game will just pick another cavern from a predetermined list and use THAT for the quest bait. 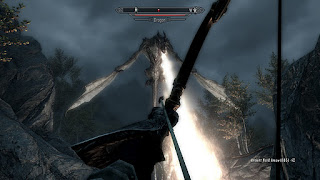 But they got a lot of things wrong, as well. The first thing that annoyed me was some of the physics. Sometimes if I fall off a cliff, by the time I stop bouncing off the boulders like a ragdoll, I'm three cities away. There -is- a difference between "laws of gravity" and "bouncing like a ping pong ball across the planet", which kind of annoyed me when my first horse fell and I found its corpse half the continent away. The second thing that annoyed me was the experience system; instead of getting points for killing things and advancing skills once you level up, you only advance when you advance your skills enough and on a level-up you only gain ten points of magic, hit points or carrying capacity / stamina (dishonorable mention is the fact that you can't research new spells nor put more than one enchantment on any item).

The third thing that annoyed me was the behavior of some of the dragons, but I think that was by design (I'm playing a solid melee character with no magic or ranged support, and some dragons will stay airborne and breathe on you from the air, making it very difficult to bring them down), which brings me to yet another gripe I had: the way things don't respawn all that often. If you kill a dragon, bear, or other large beast, go off questing for several game hours, days or months, and then return, the skeleton/corpse will still be there when you get back. Nice when it's a dragon you'd rather not deal with again, but not so hot if you're trying to farm bandit camps for things to sell or the odd piece of extra gear like you could in Oblivion or Morrowind (I later found they do respawn, but it takes a -long- time). 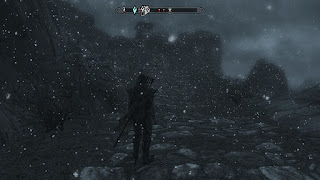 The last thing that annoyed me, and this one's the big one, was the way they handled "followers." See, every now and again you can recruit mercenaries or people who like you (never more than one at a time, which -really- is dumb... I want to see an adventuring party and interparty politics, damn it!), but if they are badly badly wounded, they don't die. They fall to the ground and slowly regenerate instead. You can kill them if you attack them yourself at that point, but enemies will ignore them if they're injured and come straight for you instead. When I saw this, I went "Really?" --- the threat of the dungeons is lowered if your characters can't die; just send in the follower to soften them up, wait for them to go down, charge in swinging, kill the bad guy, rinse and repeat until everything's dead.

On top of that, one of the followers is actually tagged as "Essential", meaning she CAN'T die. Not EVER. So if you have her as a follower, equip her with the best gear and give her a steady supply of healing, you can basically just waltz through the entire game and never have to raise a sword. That takes something away from the game.

I'm going to give Skyrim 3 Dragon Hoards out of five. It's got a lot going for it, but they got too many things wrong in my opinion. It's worth at least one playthrough, but after that, I'm not so sure.

*Update* For more information, you can check reviews by New World Notes and Paul Tassi of Forbes.

Xymbers Slade
Posted by Bixyl Shuftan at 6:00 AM 2 comments: