On the evening of Wednesday Sept 18, the night before "Talk Like a Pirate Day," Nydia Tungsten wanted to do something with Minecraft. She mentioned she was uploading a "map" onto a new server, and invited people over. 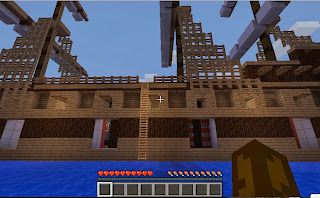 Logging on, I found myself in the water, and had to swim for it. Getting to the surface, I found two ships, one with a pirate flag, the other with an English one. Both had four large openings on each side. I swam to one, and was told this was going to be a battle between the two ships. How would the ships fight? Looking around on the deck, I found above each of those holes I saw were loading mechanisms and buttons. On the other side of the deck were chests full of dynamite. 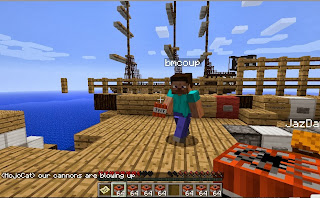 What we were supposed to do, at least once the signal was given, was to load the dynamite into the bottom part of the "cannons," press the piston button, then repeat a few more times. Then load another couple pieces of dynamite on a hole on the side. To fire the "cannon," one had to press the button to ignite the stacks of dynamite down below, which was to act as propellant, and *quickly* ignite the dynamite acting as the "cannonball" before it was launched, and scramble back a few feet. If all went right, a piece of ignited dynamite would be launched toward the other ship, where it would do some damage if it hit or blew up close enough. 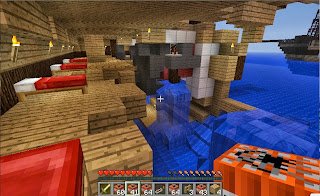 But it was tricky to use, and I don't think I really got the hang of it. Once I figured out what to do, well, what came to mind was the expression "knowing just enough to be dangerous." I ended up blowing up the cannons when I fired them the way the girls were, leaving a huge hole on the side of the ship. It seemed to be safer to just fire the propellant, and wait for the gunner on the other ship to slip up and go boom. It seemed to work, as more often than not the other ship would end up unable to fire before ours was. The result was one or more of the other crew grabbing a sword, and swimming over to board us. I never could find the crate where the swords were, but the others on my team were able to beat them back. The exception was the "guys vs girls" round, in which the girls were just merciless with the stickers.

Eventually, it was time for some of us to go to bed, and the Minecraft ship battles came to an end. At least for now. Perhaps another day, It'll be time to once again "strike the colors."

If only I could get the hang of firing that blasted cannon.