In the short time that this reporter has been with the Newser, we  have explored seven great adventures in exploring the world of  Second Life. The number eight should be a step above, for more  than one reason. In music, it is the octave, the beginning of a new  scale. In principle, there is no beginning or end to scales. They  extend, up and down, infinitely. Oddly enough, the number eight looks  like the symbol for infinity, going up and down. It has also been, for  as long as I can remember, my lucky number. For these reasons, in  this report, we will take a break from exploring places, to exploring  an important universal principle and it's manifestations in Second Life, Real Life, and Universal Life. 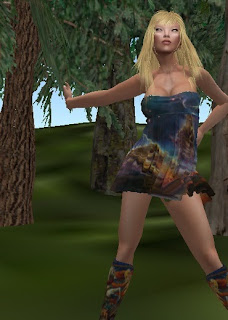 I have a friend, in real life, that used to tell me I should get off SL and come live in the real world more often. I would patiently explain to him that he doesn't understand what SL is all about. Unlike many video games I have seen, where wannabe's run around with big guns, shooting everybody and thing in sight, SL avatars think and act like real people. SL is more like an extended life. Instead of thinking of it as second life, perhaps it is more like Life squared. While it is true that we sometimes are in RP mode, we also get to know our SL friends as well or better that real life ones. We tend to love to the degree that we know people and things. We chat with our friends in SL every day. That's more than some married couples communicate. Over time, we learn who they are and where they live in real life. We know the joys and hardships they experience. Our SL friends are just as real as our real life ones. Communication is the key to the principle of Oneness.


What is a principle? The short, dictionary definition is 1) general or  fundamental law, 2) rule or code of conduct or devotion to such a  code. Getting deeper, principles are eternal, unwritten rules that  transform chaotic, empty space into the universe of forms. Quite  likely, the whole reason the universe even exists is because of a  principle, "to be or not to be", going through cycles (another  principle). A picture tells a thousand words, so I contemplated  finding a way to illustrate principles, to go with this article. I recalled,  from reading about fractals and chaos, years ago, seeing a picture  that showed how recognizable organic shapes were generated by  assigning rules for each number that came up in tossing dice. This  sounded like just what I needed, so I ran out and bought a package  of dice.

On the TV show, "Myth Busters", they always start by saying, "Don't  try this at home...". To the contrary, if you are patient, or just want  more practice in that virtue, by all means, try this experiment for  yourself.

I started a new image, measuring 512x512 pixels, to allow room for  whatever image would develop. Knowing this would take many hours  to complete, by doing it manually, I made the background a light  blue, thinking white would be too much eye strain. Two dice will give  11 possible out comes (2-12), so I made a list of 11 rules, such as  2=5up and 2 left, etc. Zooming in to see each pixel and count my  steps, I started with a dot in the center and started tossing dice.  After only an hour, I realized that looking up the rule for each toss  and counting on the screen would take way to much time and  patience, even for me. I needed a smaller list and smaller moves.  Having recently made a reference to knights on the chess board, it  occured to me that they are limited to eight possible moves of two  steps forward and one to the side. Even a blonde like me can  remember eight simple rules and count to three. They make 8 sided  dice, but where to find one was a mystery. To continue with standard  dice, I painted one black, to determine the side move. Odd numbers  would be left and even right.  The other die only needed to produce  1-4, so I re-tossed it if it came up 1 or 6. Using this arrangement, it  wasn't neccesary to check the list after each toss and I didn't need  to count pixels on the screen. Now the drawing progressed much  quicker. To keep track of where each move took me, I made each  new pixel white, then changed the starting spot to black. When I  needed to pause, I'd save the drawing and, on return, knew where I  had left off.

I hesitate to say how many hours I spent and dots I ended up with,  but I came to the point where I felt it was more than enough to  illustrate the concept. I cropped the image down to only the area  with dots and present it here. It does look like some kind of organic  form, but only Rorschach knows what. If this illustration shows the  path of a knight, he was either in no hurry to get back to the  chessboard battle field or had been to Route 66 and gave his horse  one too many buckets of beer. It does show the result of applying  priciples to random chaotic space. With that, we move on to the real  topic of this article.

Scientist tell us that our universe is expanding and calculate that  everything can be traced back to a single point, smaller than the  period at the end of this sentence. The calculater on my desk only  cost $2.99 and could never figure out something like that, but armed  with just a piece of paper, a pencil and ruler, I can tell there is more  involved than just expansion. If you draw a dot, in the center of the  paper and then countless straight lines from it to the edges of the  paper, none of the lines will cross or join together. If expansion were  the only principle at work in the universe, after all those billions of  years the matter that is expanding would be so small and so far  apart it would be invisible. We wouldn't be here to see it any way.  Clearly, there is another principle at work. That principle is  "Oneness."

In the first fraction of a second, after the big bang, all the quarks in  the universe shot out on their seperate paths, but not for long. They  quickly acted as if consciously seeking out friends and forming  groups called sub-atomic particles. These united groups had more  powers and abilities than mere quarks. In comparison, they were like  super heroes or gods. In time, these new life forms also began  seeking others of their kind and forming atoms, a life form with still  greater powers and abilities. Long story short, this gathering of many  into one continues, forming solar systems, then galaxies, to the  universe as we now know it. Perhaps, in the far distant futer, our universe will also join up with other one.


As humans, we are governed by the same principle. Individuals  gather into families, which gather into comunities, then towns and  cities, states, nations. Whether you like the idea or not, the entire  planet is destined to become one government. This will be by the  free choice of it's billions of citizens, not forced upon them by a  tyrant.


Second Life also is influenced by the principle of Oneness. On your  first day in SL, you are a stranger in a strange land, standing in a hub  with a bunch of other clueless nubes. If you were lucky enough to  have been introduced to this world by a friend, they will soon find  you and friend you and introduce you to places and other people.  Even if you didn't start out with a friend, this virtual world, thanks to  the Oneness priciple, will quickly expand your friends list. Some of  your friends will even become like family to you. I know many people  that call me "mom."

As you discover Sims and clubs that you like to spend time in and  return to, more often than not, they will have "groups" that you can  join. Sometimes, just entering an area will trigger a message which  asks if you'd like to join. Other locations provide signs to click to join  their group. If you are in a nightclub, the host might ask if you'd like a  "tag", meaning join the group or you can ask for a tag. Most groups  are free to join. Often, group members can do things that non- members can't, in the club or sim. A big advantage of joining a group  is that you are now in a collective of many people that share some of  your interests. The next step towards Oneness in SL is  communities. There is no mechanical proccess to joining a  community and no tags to wear. Community members tend to work,  play and live together. Many will belong to one or more of the same  groups as others. One example of a community is one that I am part  of, called Sunnies or Sunweavers. In my article on Caledon, we find a community which spans over two million square meters.

Seeing the workings of the Oneness priciple, in the universe, real life and Second Life, it is not hard to make a prediction of what is to come. Some day, in the future of second life, we will all be members of one big group. We can only guess at what it will be called. Perhaps we will call it Second Heaven.

Becky "Sha" Shamen
Posted by Bixyl Shuftan at 6:00 AM