"Feed The Beast" and The Minecraft Building Contest

Since the Minecraft "Angels Village" server was updated, and it's contents wiped away, the attention of the game's players in the Sunweaver and Angels groups switched to the FTB, aka "Feed The Beast," servers set up by both Kit Repine and Nydia Tungsten. Kit's initial server went from a shack set up near the spawn point for anyone unfortunate to drop in at night to a small stone fort with an ever-expanding underground chamber and tunnel network. Valkyrie McGil built an impressive build on the cliff next to the fort. 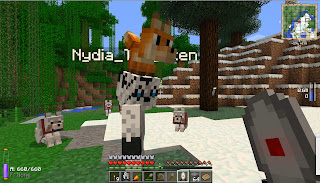 Jasmine quickly noticed the wide variety of tools the FTB version of Minecraft offered, from robot miners that could clear out sections of underground for stone and ores, to better suits of armor, including one with limited flight ability, and some nifty gadgets. One I found useful was a mechanical arm that acted like a combination diamond pick and gun. One could use it against zombies and creepers, but it had a strong recoil. Another was a pair of boots that kept one from getting hurt when falling from a great distance. It's a safe bet most Minecrafters ended up back in their bed after making a misstep at least once. One gadget some players had fun with was the "Portal" gun, which acted like the one in the game. One fun thing that came later were the funny hats that one could collect from mobs they appeared on at random. 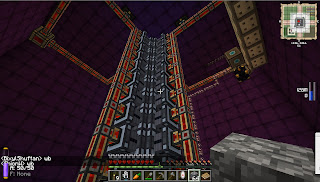 But building these tools and toys required machines, machines that required energy. Exploring around, I came across a few oil fields some distance away. Those were one source of energy. But Jasmine's bigger machines required more. One interesting feature of "Feed The Beast" was accessing other worlds, or overworlds in Minecraft jargon, besides the Nether and "The End." Some of these places were quite strange, such as one in which players could end up damaged from sunburn if not wearing certain types of armor, which put us in the same position as a zombie or skeleton. These worlds could be accessed through portals, but they could also be traveled to and back via special books, leading to this part of the game being called "Mystcraft," after the popular computer game Myst in the 1990s. Besides places to explore, Jasmine used them as a source for mass quantities of energy-supplying lava and lots of ores.

All these features were certainly a contrast from the Minecraft we'd first set foot it, and it came with a price. Lag began to become a problem. And then, the servers would start to occasionally crash. This became quite frustrating to players and server owners alike. As it turned out, "Feed The Beast" was the combined result of over a few hundred Minecraft modifications cobbled together. Little wonder it could get unstable at times. And then came the server updates, which would sometimes wipe out what was made.

Despite the bugs, interest in Minecraft persisted. Nydia took some time to clean up her new FTB server before inviting her friends over. Once she thought it was ready, she wondered how it could be tested. 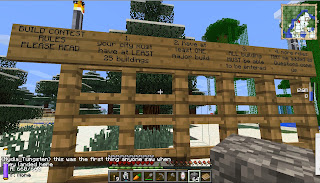 "I wanted to test the latest FTB server, see if the problems were solved," Nydia told me in a conversation, "so … I thought what a better way to test it than to have my friends go NUTS with their builds." Nydia decided to hold a competion to see who could come up with the best build, "So I turned them loose with OP powers and kept an eye on the server." The rules were fairly simple, build a town a small group of players could reside in, " purposely left the build requirements vague, I wanted to see how they would be interpreted, and I must say I was NOT disappointed in the creativity that was generated. (I wasn't the) only one impressed either, the builders were as well when they got to see each other's builds." 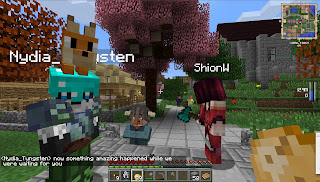 The competition attracted a number of players, "We started with over eight builders, but due to their real-lives, some had to drop out, which was a shame really. The beginnings of their builds looked so promising. We had futuristic to medevil and even fairy tale fantasy. We even had some Anime thrown in, but unfortunately that one wasn't finished. … This will sound obscure to those not familiar with the series 'Girls und Panzers' it was going to be a city ship," a ship with a city built inside, "It qualified for the contest (laughter)."

"The way it was judged was very unique as well," Nydia explained,  "I have never heard of (Minecraft) being done like this at all. I left some of the judging be done by the builders themselves. The only reason I did it that way was I knew all the builders and knew they would be fair. They would judge the others, but not themselves. And I had 2 people here with me in real life that don't play MC (yet) to help me with the judging. And yes I did the live broadcast the event to help." Nydia put a live feed of what she saw into her video channel on the day of the judging. 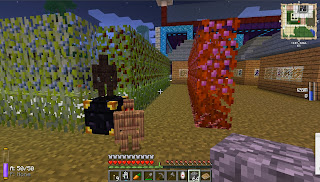 One problem the contest had was the unstable nature of FTB Minecraft, and the contest was suspended and extended a couple times due to the server crashing, " I run it off my same system I use I thought it could maybe it could handle it this time, unfortunately...it cant. … I wish I could invite everyone on to view the builds, but itwas just too hard on my system, I have 8GB of RAM with the server and (with) Second Life running, it would climb up to the 80% used area. If I was linked a video....it would go into the 90s. More than once it got to 98%, if it went higher I would crash." Still, she persisted, "But we were able to finish the contest and have a lot of fun in the process."

Of the winners, Skylark's village came in third place. Valkyrie was second "by only a few points." Her village was near the server spawn point, and had crop and berry bush areas, with miniature golems gathering the fruit. For first place, it was "a tie between 2 good friends and Angels Jasmine and Shion (Winkler), it was so close it was almost a 3 way tie!" 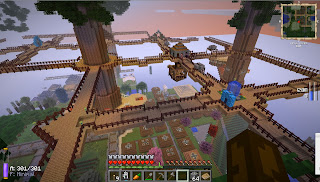 Jasmine's place was a treehouse village with buildings set up on super tall trees, "t was a fully function town any elf would DROOL over with all the tech any mage would envy and then it had the walk ways between the massive trees to count as a city in itself." Jasmine tapped into another overworld via "Mystcraft" for the lava to power it, "Val went into the Nether to power all of her computers and tech as well." Jasmine's village had a diner in which automated machines could dispense a variety of foods with the press of a button. Kryxia Silverfall helped her out during the building. 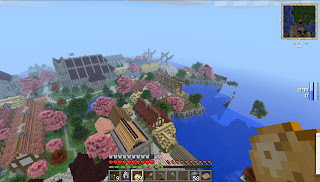 Shion's town was build around a cathedral, as were some Medieval cities. It was the most detailed building, both inside and out. It had a harbor with ships, and a balista and a number of cranes around, to give it the look of a place still in construction.

For the winners, Nydia had a prize, "I kept the prize secret until the day of Judging I was able to offer the winner $50 USD or split it as it turns out, but they both turned it down. Sooo, I donated it to 'The Furry Gamer' group to help some of our members get into the rest of (the games we play). They wanted me to use it for my Angels, which I will do if it is needed. But I think it could do better for a group dedicated to having some fun. Thats what this was all about, having fun." 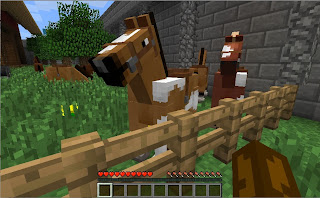 As good as the builds were, Nydia had to take the server back down. The FTB was just too much on her systems to keep up without crashes. But her new "vanilla" server, updated to Minecraft 1.62, was available. This newer Minecraft is commonly called the "horse update" due to its now including horses. They can be fitted with a saddle and "broken" for riding.

So how to build a place for the Angels there? Nydia soon had her answer, "that night when I finally had all the votes, I brought them all to my office at home (in Second Life) and told them who won, well, they started talking about each others builds, and before I knew it I had a build crew on my hands for the new Angels Village. … once in and started they met up with 'Hojo' another builder from the last world we had and he joined in" 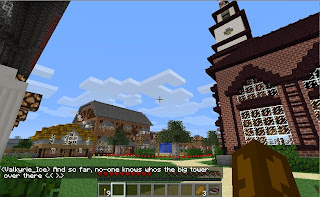 Dropping in for myself at Jasmine's invitation, the place wasn't too far from the spawn point. Just walk down the road for a few minutes, and one would soon see the place, encompassed by walls. Inside, they had built a barn for horses (by Jasmine) and other critters, a town hall, an inn, an outdoor market, a mages tower (by Valkyrie), a cathedral (by Shion), a harbor with ships (also by Shion), and more. When Nydia saw it for herself, "I can sum it up with one word: 'Whoah …' "

So what was next for Nydia and her Angels & friends in Minecraft? She does have some plans, "in the future I am planning on having adventure maps for group play. I have a bit to learn still before I can start hosting events but it IS planned for in the future. We have had 'End raids' in the past and those were a LOT of fun."

So despite "Feed The Beast" acting a bit beasty, the action in Minecraft from residents of the Sunweaver and Angel's estates continues.

Nydia has a video of the villages during the contest judging donwloadable in the following link (here - 498MB).