Getting and/or selling Linden dollars used to be a lot more complicated than it is now, especially if you lived  outside the United States. Some residents living outside North America found the LindeX too difficult or impossible to use. For residents who couldn't buy or sell Linden dollars quickly or easily, or would rather deal with someone other than the Lab, a number of third-party virtual currency exchangers went into business to help and make a little money for themselves. Among these was Podex, owned by Jacek Shuftan, which was the Newser's first sponsor. Every month, we would run commercial adverts for them, notably the misadventures of a bungling burglar who kept trying to rob the place but always failing hilariously. The "Clumsy Cooper" adverts were ones I loved doing, and got readers chuckling.

But in early May 2013 came an unwelcome surprise. Linden Lab changed it's terms of service to ban the buying and selling of Linden dollars with anyone but the Lab. The results were protests by residents, some saying as they couldn't use the Lindex they would have to abandon their virtual homes. There was talk of entire communities up and moving to Opensim. Some exchangers shut down right away. Jacek remained open, trying to talk to Linden Lab. But the Lab would not listen to him and chose to suspend his account. Finally, the Lab did a partial reversal. The currency exchangers could reopen after getting permission as "authorized resellers," but would operate under tighter conditions. Most notably, they could only sell Linden dollars, not buy. Several were initially accepted. Podex and others would have to wait until early June to be back in business.

Exactly why the ban came to be was the subject of some debate. Many felt the Lab was acting out of greed, seeing the currency exchangers as making money that they felt belonged to them. Others felt something else was at work. A couple months earlier,  the US Treasury Department's Financial Crimes Enforcement Network (FinCEN) issued a statement on guidelines for the regulation of virtual currencies. While this was written with virtual currencies such as Bitcoin in mind, and Linden Lab called the Linden dollar a "virtual token" or a "limited license" that could be traded inworld, one commentator felt it could potentially apply to Second Life's currency as well. "FinCEN goes by the approach 'If it looks like a duck, and quacks like a duck, it is a duck,'" he stated, "And Linden Dollar sure does 'quack' like one. Linden dollar is a virtual currency because it has value in real currency (a buck will buy you about 270 linden bucks); and people buy good and services with it." So perhaps the Lab panicked and pulled the plug without thinking of the consequences. 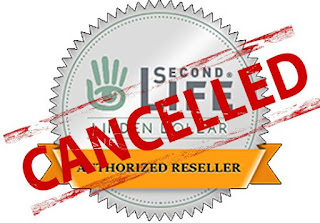 All was well for two years. Then in June 2015, Linden Lab announced it was disbanding the Authorized Reseller Program, and the currency exchangers had until the end up July to conclude all business. The Lab stated, "we have expanded the payment options for Second Life users, and today, you can easily purchase L$ in more countries than ever before." Once again, there were protests, but not quite at the level of before. So despite the calls for Linden Lab to reconsider, including a petition with over a thousand signatures, Linden Lab this time would not relent.

And so the virtual currency exchangers closed, including Podex. And by November, their office in Second Life had faded away. Nothing else from them is known to be around, save for one of their machines at the Newser office left up as a momento. The Newser's first sponsor was gone, and the character from so many of it's adverts would end up in one more story, a piece of SL fiction, and no more. Final salutes to an old friend.

Covering politics can be tricky as you risk alienating half your audience. If your job is to inform the public instead of appealing to readers to favor one side, you have to put aside your personal prejudices. In Second Life, it's trickier in some ways as many people come here to briefly escape real life, but so do a few whom seem to be intractable political animals (with or without furry avatars). Politics can be one of the more annoying parts of life or virtual life to many. But it's something that can't be ignored either as the results can affect you personally.

I covered the previous two Presidential Elections. The 2008 Election between Barrack H. Obama and John McCain was overall polite and even tempered, for an election. The 2012 Election between Obama and Mitt Romney, not so much as supporters on both sides seemed more annoyed and irritated with one another. The 2016 Election was a strange one in that an outsider and political newcomer, Donald Trump, won the nomination for the Republicans. While unpolished and reckless, Trump was a master of social media and had a way of making the debate all about him. Hillary Clinton, the candidate for the Democrats, was intelligent, but awkward and aloof. With the increasing political divide, they were two of the most unpopular Presidential candidates in recent US election history, and it was among the most divisive elections as well. 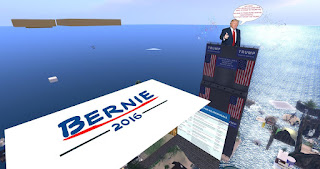 Early on, there were a few small political builds. Then in March came larger ones, a Trump supporter named JP Laszlo built the Trump Manor, based off of Trump's manor in Florida. A supporter of Clinton's opponent for the Democratic nomination, Bernie Sanders, built the Sanders HQ. Later in May, another supporter would build "Feel the Bern."

In April, things heated up when some Trump supporters erected a huge wall in front of the Sanders HQ, making a few comparisons to the "War of the Jessie Wall" (NWN link) early in Second Life's history. Trump supporters called it a prank. Sanders supporters called it an "annoyance" that overshadowed a number of examples of griefing. The people I talked to told me they wanted level-headed dialouge, but there was no agreement on what the "rules of engagement" should be. With some trolls causing trouble at the Sanders HQ in the name of Trump, there were calls for Linden Lab to take action.

In early June, the Trump Manor would suddenly close it's doors, with plans to build a larger location, as did the Trump Wall. Ironically, a Clinton HQ would be set up on the very spot it had been.  Bay City would also get a Clinton HQ.

Then came some surprising news. Linden Lab had banned the leader of the Trump Organization, as well as several other member of it's group. Exactly why they were banned the Lab didn't say, though as a map view of their private sim showed a large black eagle, Hamlet Au compared it to a Nazi symbol. JP Laszlo would later come out as a supporter of Woodbury, an infamous group associated with griefing and trolling, which some Democrat supporters called further evidence their opponents were basically trolls.

After that, the political drama in Second Life slowed down. The remaining Trump supporters basically laid low, some creating a "Trump Pub" where they kept to themselves. Locations such as the Clinton HQ in Bay City would show broadcasts of the Presidential Debates to small audiences. 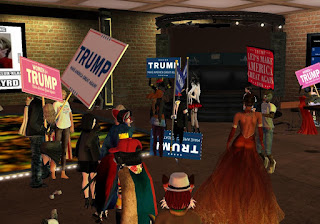 In real life news, the plurality of polls showed the two candidates were roughly even, with Clinton having a slight lead but small enough for a statistical tie. So many Democrats were cautiously optimistic and some Republicans were prepared for a loss. But Trump ended up winning the election, after a long nail-biter of an evening in which the results were not official until close to Midnight SL time. On my Facebook feed, about a third were in a celebratory mood. About a third were shocked and dismayed, wondering how this could have happened and some accusing the voters of "betrayal." About the only liberals with less than heated opinions were a few Sanders supporters whom were going "We told you so." It seemed only bout a third of my social medial contacts didn't say much of anything on the subject.

After the election results many of the political left were in shock and fear, some of those in Second Life going to "Safety Pin" support meetings. While the mood of those who supported the Republicans was more cheerful, some were less than enthusiastic. The Presidential Inauguration's largest celebration would take place not in an American sim, but London City.

The election didn't settle political matters as many of Trump's opponents grew increasingly bitter, the most visible example of this in Second Life being the artist group known as "Avatars Against Trump." Their artwork had one or two pictures that were funny, poking fun at the new President. But most were dark and humorless. Not all who supported him were satisfied either. One conservative podcaster would go on hiatus, saying political debate had become an echo chamber and he didn't feel like taking part in debate that had nothing new to discuss.

After that, the Newser didn't write much on political matters. This was partly due to a few complaints from readers. No one complained about bias. In fact we were praised for making an effort to cover both sides. But some grumbled that they came to Second Life to escape real-life matters such as politics, one comparing the Dems and Reps to two bands of shrieking monkeys throwing poo at one another. And with the election finished and the immediate results covered, it was time to move on.

Four years later, the country is facing another Presidential election. And now, the Newser has to decide how much to cover the "shrieking monkeys" once more.