Continued from Part One. 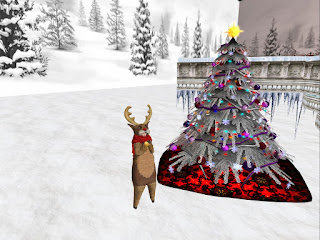 After two intensive days of investigation, one thing was clear.  Everyone living in the North Pole HATED Santa Claus.  My list of suspects was endless.  Everyone had a grudge against him and they all seemed glad that he was gone.  I looked everywhere in the North Pole, putting myself in great danger when I confronted two polar bears who stated that they had to pay a monthly rent to Santa Claus so they could stay there.  To most inhabitants, Santa was an oppressor.


I was not finding any clues other than that.  That’s when I realised that I would need to infiltrate if I wanted to resolve this case.  I talked to Roan the Elf and explained my problem to him.  I needed to go incognito!  Roan thought for a while and dashed away.  He came back with a box and said that he found the perfect disguise.  I opened the box and smiled.  His idea was brilliant!  I quickly changed into the costume and smiled.  I could pass as a reindeer easily with this thing on. 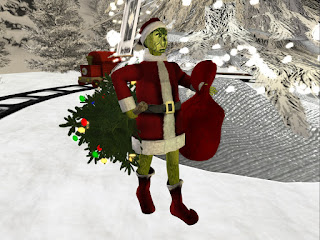 As I stepped out of Santa’s house, I noticed a commotion nearby.  I went to look and my jaw dropped.  It turned out that the elves had lost hope already.  They had started to audition for a replacement Santa and there were all kind of creatures, including the Grinch, who wanted the prestigious position.  I knew that Christmas would be a total disaster if I did not figure out what happened to Santa Claus.

I went around, the costume keeping me warm.  I marched confidently, knowing that I would find some clue soon.  Unfortunately, I was wrong.  It turned out that no one had any idea.  The inhabitants repeated whatever they told me yesterday.  To make it short, Santa was a total bastard.  I figured that I had to search elsewhere if I wanted to find Santa.  I decided to venture across the globe on my own in order not to draw attention.  I did not want Santa’s kidnappers to find out that I was investigating.  My search took me to places which I heard Santa would sometimes go during the year.  These included zoos, casinos, strip clubs (yeah I was speechless too when Mrs Claus mentioned this), and more awkward places.  But the thought of someone else taking Santa’s place kept me going. 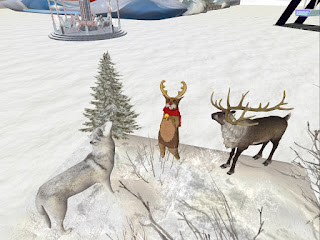 Some days later, I decided to give up.  There was no trace or clue.  I felt terrible whenever I saw kids walking around excitedly as Christmas approached.  I knew that that Roan and Rudolph were waiting for good days; after all, I had promised them that I would solve this case.  I did not have the heart to tell them that they would indeed need a new Santa.

Before going back to the North Pole, I decided to visit a secluded beach to think about how I would break the news to them.  I found a quiet spot and starred at the waves while I listened to the birds chirping a tropical version of ‘Jingle Bells’.  Suddenly I heard a rough voice shouting in anger, “Rudolph, what the hell are you doing here?”

I looked up and blinked in confusion.  It could not be!  I rubbed my eyes while he continued to shout and yell.


“Santa?  Is that you?” I asked, watching the old man in his Santa suit and boots and a pair of funky shades.

“What happened to your voice, you idiot?” he asked back.

“I’m not Rudolph!” I shouted, feeling irritated.  Santa looked at me closely and let out a sign of relief.  I explained how I ended up at the beach in my Reindeer costume.  When I finished, I said that he owed me an explanation. 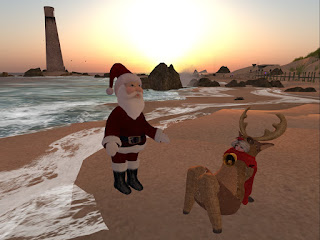 It turned out that Santa Claus needed a break because he felt overwhelmed and so he decided to take a vacation to a secluded tropical spot, away from the North Pole.  He also wanted to get his dose of Vitamin D from the sun before Christmas.


“Those bastards are probably happy that I’m gone!” he grunted out as I enjoyed the sun’s warmth.  I nodded as he continued, “Ungrateful ….”

“Do you ever get any gifts for Christmas?” I interrupted as I stared at him.

“That’s because you are a jerk to your own neighbours!” I snapped, “Everyone hates you, so its obvious that you will never get gifts in your life!”

“But I’m Santa Claus!  Everyone knows that!” Santa argued.

“So what?” I countered, “Being Santa does not give you the right to ill-treat everyone!  And don’t tell me that you don’t.  I know what you tried to do to your snowman!”

Santa looked at his feet for a moment before letting out a sigh, “But North Pole is so boring.  There’s nothing, it’s just all about Christmas!”

“You can make it exciting if you paid attention to everyone.  They got great ideas but they can’t talk to you because you are mean.  In fact if all the children in the world knew how you behaved, they would stop celebrating Christmas,” I stated.

I spent the rest of the evening explaining to Santa how to be a better person and neighbour.  He seemed willing to make an effort.  I hoped he would not disappoint.  At least I had kept my promise to Roan the elf and Rudolph the reindeer.  My job was done.

As for Santa, he will be heading back home soon now that he got his dose of Vitamin D and a suntan.  No one needs to worry anymore.  Christmas is not cancelled.  Santa is fine, he just wanted a little summer vacation before the big day.