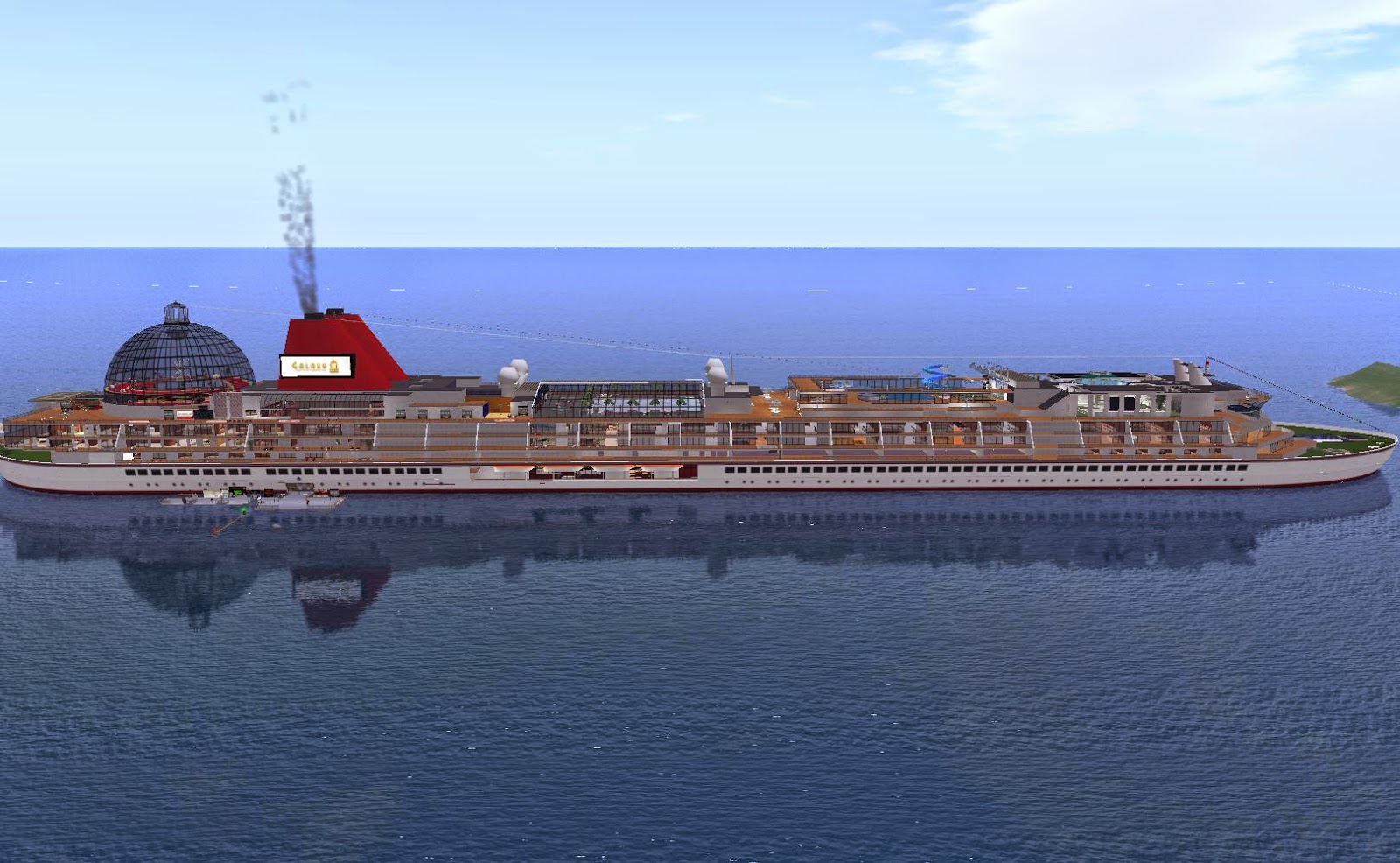 On Sunday April 26, DBDigital Epsilon, the Managing Director of the SS Galaxy announced through a statement that the three sim long ship, the largest ship and perhaps the largest build in Second Life, would soon be closing down. The statement did not reveal the reasons for the closing. When I contacted DBDigital, he told me he was not prepared to say anything beyond what was in the statement at that time.

The following day, there was quite a bit of talk about the ship closing in the Relay volunteers chat. People were expressing sorrow over the decision to shut it down. But something else was being told in the chatter. People were saying that the ship was closing because of repeated griefing. Supposedly a whole section had been taken down. Also, Linden Lab was being described as not helping very much.

Heading to the Galaxy, I ran into a few people. Among them were Mrs. Mia Epsilon (doramia.aeon), the partner of the director, and two of the staff, Slobrador (henning.lionheart), and Mrs Polly Eberhart (polly.riederer). Mia told me, "It's fixed now. Aft was affected, ... Db and a couple of staff worked all weekend to fix it. ... My husband DBDigital is the Manging Director .... I think Henn took the most pictures of the damage." Slobrador shook his head, saying someone else did, "I wasn't online during the last attack." Mia went on, "The ballroom dome was sometime Saturday early morning, and the walls and decks in aft were also. ... There was a hole blown into the aft section, and the pieces fell to the ocean floor. The decks of the ship were mangled and twisted, the walls misplaced and uneven. The dome of the ballroom was shattered. ... So we know the aft hole happened Thursday." Mia told me this had been the latest of several attacks in recent days, "between late Thursday night and early Sunday morning. We have had griefers before but not on this scale." She described earlier incidents as pranks in comparison such as spiders in the ballroom. Polly added, "Never in my 7 (and a half) years of working here have I seen anything on this scale." 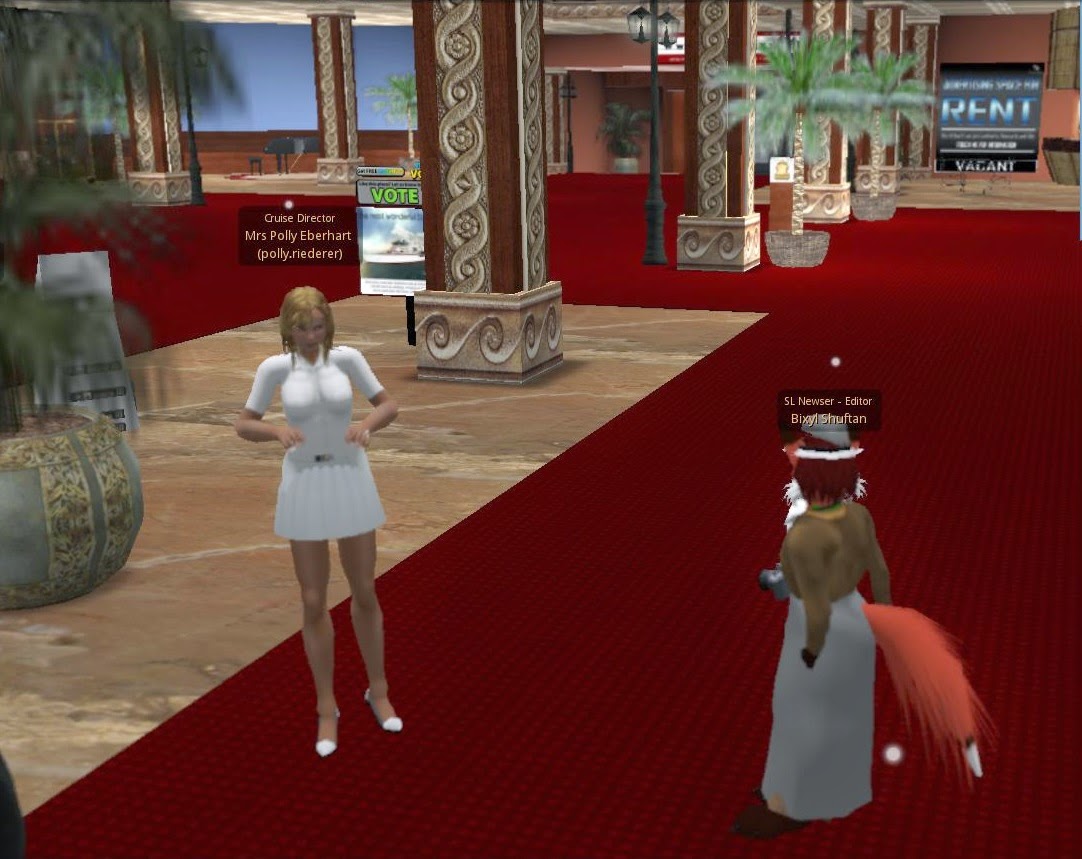 Polly commented, "and LL can't guarantee it won't happen again." Mia told, "DB spent hours on the phone with LL. They allowed one roll back which fixed the decks, walls and dome." Polly nodded, "DB has been dealing with them constantly." "Why only one?" I asked about the rollbacks. Mia answered, "LL said they would only permitone." "One a day?" "One total." "Just one and no more, period?" "Yes, just the one. And they said they had no way to stop the griefers from attacking again."

I then asked, "Is that why the decision was made to close the ship?" Mia answered, "The owner decided based on that and the safety of the passengers." I asked, "So he felt he could no longer guarantee a pleasant stay for his patrons?" She answered, Yes. We have dozens of renters here, as well as events and guests.  He wanted to ensure people coming here are safe. There is always so much going on here. There's shops, activities, and this is home to many."

I asked, "Were there alternative courses of action discussed, such as temporarily closing the ship, or restricting who could get on board?" Mia answered, "Yes, DB had already turned off rezzing. Of course, for renters, that is never a good option. One wants to be able to rezz in their home after all. I believe every avenue has been looked into." Someone nearby asked "Did you say earlier that the griefer was indeed estate banned but this didn't solve the problem?" A friend of hers reminded, "You can easily make alts." Mia informed, "The ship tracking system showed only two people aboard when the damage was done."

I then asked, "So there's no chance that the ship will be brought back in the future?" Mia answered, "I like to never say never. He talked to several Lindens. It is our home." A Tronion Sands nearby commented, "Can't always trust who was onbaord to say who was the griefer though, due to someone accepting an object, that person rezzing it causing greifing. I've seen it in other sims." Mia told him, "Yes Tron, thats the theory here."

Talking further, Mia told of DBDigital's dealings with Linden Lab, "DB knows several of the Lindens very well. (After) eight years, hard not to. The first Linden he spoke to Friday (April 24) morning said a rollback would happen by 11 SL time. But it never did. When Db called again, the next Linden said they didn't allow roll backs for private sim matters without compelling reasons." Polly commented, "I personally think this was a compelling reason but probably not to them." Mia went on, "They did do a rollback Saturday, but only one." Someone nearby commented, "If they won't do more than the one, then they found something irregular." 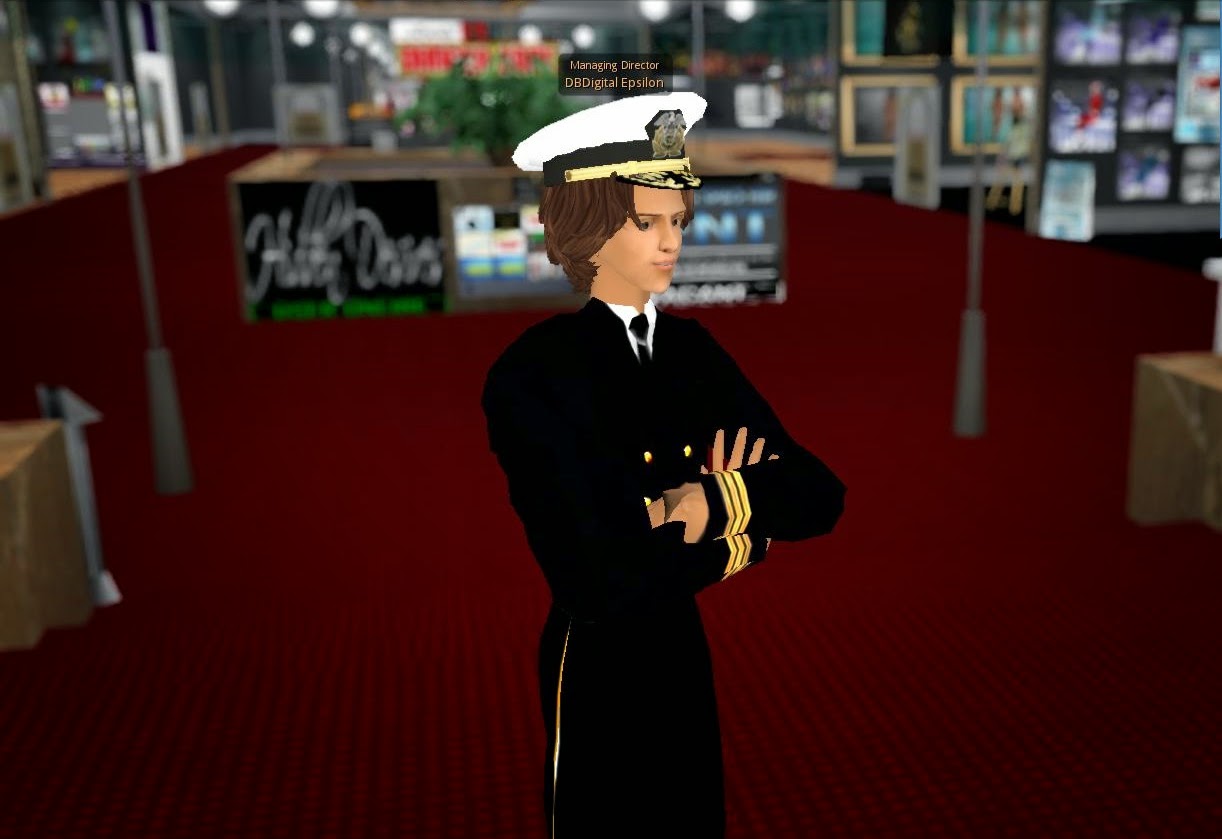 Some time later, Mia introduced me to DBDigital just after he logged back on. I introduced myself, and brought up the stories about the griefings. But he would say little, "As for the reason for our closure, I can't give any further comments other than what I said previously. ... Yes, we have weathered many storms. It has been a very enjoyable 8 years in SL." I then asked if there would be a farewell party. He answered, "There is not a official farewell party, however our last DJ event is Friday 12-2pm at our Coral Lagoon Pool Deck. If the schedule changes, it will of course be posted on our website http://www.ssgalaxy.net ."

I then asked, "Is there any chance that the ship may be coming back soon?" DBDigital answered, "Sadly no. The ship will disappear from the SL Grid May 3rd. As you know when sims are shut down all contents are deleted forever."

I then brought up one other, much smaller build, in the vicinity, "A few years ago, the Crooked House was movied in this vicinity. What about it?" DBDigital answered, "All five sims of the Galaxy will likely be shut down and the Crooked House relocated. That hasn't been decided yet. Regardless the ship itself will close."

"So what will you yourself do after the ship is gone?" I asked DB Digital. He answered, "I don't plan on taking any large projects. Although I have already had a few offers. I have declined them all." I asked if there was anything he wanted to add. He responded, "Nothing more than what I have previously said. ... As hard as this is, I know it is God's timing and time for her to go with dignity and grace as she always has."

And so, investigations have revealed just as many questions as answers about the closing of the SS Galaxy. Why has Linden Lab made the decision to limit their help to not just any customer, but one whom has reliably paid the tiers for five sims for almost eight years? Why have they done so little to help out the largest build in the Grid? And what does this mean for the other sim owners across Second Life, especially those whom have built up their lands with public access in mind?