In Second Life a lot of the time you see music clubs that are all about music, but there’s also a ton of emotes covering up the sounds. Nothing wrong with clubs like those, but if you’re looking to hang out with friends in a more mellow setting, I think Antaris’s Treehouse might be what you are looking for at SkyBeam FirstLand (34/87/35). The first thing I noticed is the music stream is very mellow. It’s not hard dance beats like from Dance Island or from club culture, but more like a coffee house atmosphere which is Antaris is aiming for. Antaris and I know each other from real life, so doing this interview was a real treat. 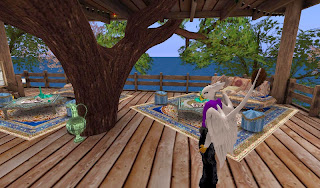 Antaris Gothly had something before called the clubhouse with her friend Sakura. She described the general idea as this, "Originally, I was trying to resurrect something that Sakura and I did many years ago called, The Clubhouse. It was just a place to sit and relax. A place to hang out for all of our friends. A safe place to be who we are without judgement."

Antaris said for many years she was managing clubs and dj/s. She said she wanted to take her Second Life and real life in a new and authentic direction. So I asked what direction is she going now. Here’s what she had to say, "The direction I'm going with this place is a more modern bohemian style. Fantastical, old world charm with the combination of the artisanal coffeehouse culture. I wanted to not only make an place of artistic and mental expression, but a place that was safe and welcoming to all of its visitors. But there is also a lack of places where furries and non-furries alike are accepted and welcomed in tandem."

I agreed with Antaris that most places welcome furries outside of furry clubs, but not all. She was shocked when I told her a church wanted me to change to a human avatar, her saying, "Jesus was about acceptance and love of ALL beings, not to pick and choose." Antaris herself isn’t a subscriber of Christanity, she’s more into Wiccan beliefs as well as Buddism. 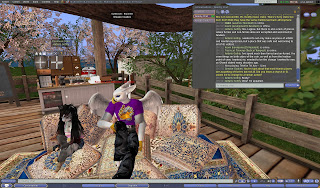 Antaris Gothly: "I wanted to not only make an place of artistic and mental expression, but a place that was safe and welcoming to all of its visitors." Like Gandhi, Antaris wanted to become the change she wanted to see in herself, "I've spent much time furred and un-furred. I've seen things on both sides of the coin, as well as from the lesbian point of view. I wanted, no, needed to be the change I wanted to see, as Ghandi stated many decades ago."

Antaris’s main event is every Tuesday night open to anyone who like to perform music a short story or poetry or maybe even magic, "Every Tuesday night at 5 pm SLE, or 8 pm EST, I host a 2 hour open mic night where anyone who wants to can go on up and tell a story (like you did Grease), read poetry, sing a song, play their instruments, dance, do some performing art, do spoken word, rap, do magic tricks, whatever they wish to share with us."

If possible, as the Treehouse grows in popularity, she might have more open mike nights. She’s looking for live bands and or also live performers. There’s an art gallery open to everyone including furries, humans, robots or otherwise. Antaris told me, "Well, it's not free. 23 L/week for 10 prims. But that's what I can afford to share at this time. That's why I want to expand that to its own parcel."

But also Antaris didn’t want people to forget her friend and helper. Sakura Rajal has helped a lot in creating her treehouse, "I'd also like to point out that my niece and one of my dearest friends Sakura Rajal, the owner and creator of WinterShadow boutique (Just down the hill) is crucial to the development and creation of The Bohemian Treehouse. She helps with the day to day management and design of the place. I couldn't do this without her."

I happened to say it’s the people that make a place great. And Antaris said, "Exactly. Otherwise it would be an empty tree. What's the point or fun in that?" 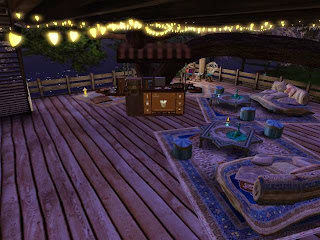 She had this to say about the depth and complexity of Second Life, "SL is a virtual world made up of pixels, however there is a level of creativity and expression in here that in many areas of the world is frowned upon, or so expensive or dangerous that one can't do much about it anyway. SL has become a medium of sorts for creative expression for EVERYONE of all ages, all nationalities, all genders, all sexual identities and orientations, no matter what they're into, to come in here and create! That blows me away."

I added to that by saying, "Oh yeah in reality you can have a house cat but you can't be a cat. And yet both of us are sitting here as a cat and a griffin defying the laws of reality."

And the Treehouse itself is decorated very well in pillows to sit and relax on. And yummy things to buy and eat. Even if you don’t want to perform you can still hang out here and talk with your friends. The ambiance is relaxing along with the chilled music. You can talk about the newest MLP episode or maybe about retro cartoons or just utter goofy nonsense.

Be sure to check out Antaris Gothly’s new treehouse with your friends when you want a change of pace from the music scene and you want to slow down and have some tea. Antaris would be glad you stopped by to hang out.

Antaris' Treehouse has it's own Facebook page, where it's called "The Bohemian Treehouse."
Posted by Bixyl Shuftan at 6:00 AM