Insilico: Roleplaying on Mars of the Future 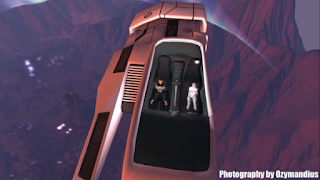 “Welcome to INSILICO” My cybernetic guide Star Raven typed, punctuating her greeting with a smiley face, "This is East, our homestead. We have a few rentals here, but not many due to prim space limits. We have two venues here for role play and any event. The Buddha Bowl was a landmark of West INSILICO (which is no longer with us for various reasons), so we moved it here and upgraded it to mesh.”

I looked around at all the neon signs and strobing lights. This was not my first visit to INSILICO but the futuristic cyber punk sim is so immense that even the most road savvy navigator could run the risk of losing his way, so I thought to call on one of the sim admins to see if they would be willing to show me around. The admin board is close to the teleport landing zone so I looked over the profile pictures and thought to myself; “The girl with the green hair looks friendly." 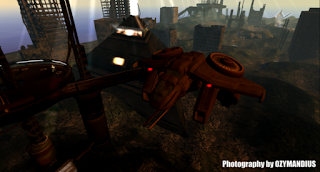 Shortly after clicking on her picture I was hailed by Star Raven and, after appearing before me in the form of a metallic humanoid, I was pleased to learn she was INSILICO’s Public Relation’s GM.

"INSILICO was founded in 2008 by Skills Hak along with a few guest artists, some of which still build here art projects time to time.” The glittering silver android explained in her own peculiar grammatical style. "Insilico itself was an art project in the creators eye as a vision of the future, but as soon at it was done, role players came in and made it a home with Skill's blessing." 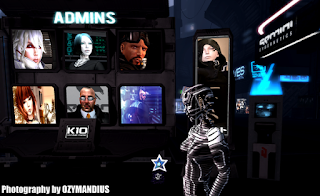 I listened to Star Raven with curious fascination as she shape shifted into the girl with the green hair. Perhaps she had greeted me with a metallic form on the chance I might be hostile or maybe she had been doing industrial work in deep space where the lack of oxygen and warmth would have been too severe for her more fragile shape. Whatever the reason was there was little time to wonder as INSILICO is a big place, and I had opted for the walking tour.


"Skills founded our RP website and helps us run the sim as we help her in turn together. She doesn't RP, but helps maintain and rebuild along with our new builder Stark Osterham.” According to my green haired guide, INSILICO is a multi-tiered sim that includes INSILICO City, Mars, Cyberspace, Lyra Station, Kill City, and Earth Ruins. 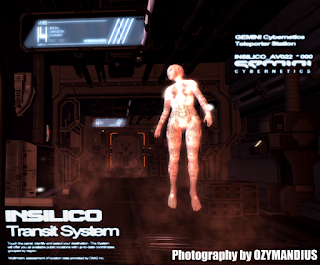 "Insilico takes place in the year 2485 where humanity has made Earth uninhabitable due to wars and pollution.” She elaborated as we strolled past hotels, restaurants, sushi bars and private apartment buildings. "We have many groups in Insilico. Metro is our fan group, we have a renters group and small groups for establishments in sim. We have only one roleplay group that is open to all factions to get up to date RP local, requests, and story lines."

Above our heads the flashing lights of air cars swished past like fireflies in the twilight sky and I instantly felt I had stepped into a scene from the movie “Bladerunner".

"Insilico also has real artists, DJs, and other media come into sim from ti\me to time to play such venues.” Star Raven said as I took a quick snap of a building illuminated by fluorescent Korean text. "The Aftermath is more punk, Reaktor is more adult, Fusion more class, and Asylum on Mars more adventurous."


It was truly remarkable the depth of the design, the vastness of the future city and yet I did not experience the lag I had experienced on far smaller and less complicated sims. 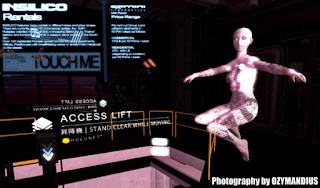 "We are more than just a roleplay sim, we like to help out the bloggers, shop owners, shoppers, photographers, rpers, and vistors in sim with what ever they want.” She said as we approached an Arabesque cafe known as the "Kasbah Cofeehouse”. "In Central we also have the K9 Fight Club for combat and The Blue Ant, a great and starter rp spot."

After passing through the cafe we ascended a flight of stairs into an art gallery and after taking a quick look at the Second Life snapshots that graced the gallery walls I inquired as to the means by which artists exhibit their work.

"They can ask us and we would be happy to set them up at a fair rental price, beside they can sell their art work in gallery as we promote it on our Facebook, Twitter and main Insilico site.” She replied before commenting on some near bye apartment buildings. "not everyone can afford our rent, so we offer limited space at 25 prims in an area for 100L a week for a great test drive so to say."

Again my guide changed forms, adopting a humanoid shape with a glowing skin that seemed to be covered with pulsating circuits and binary code. 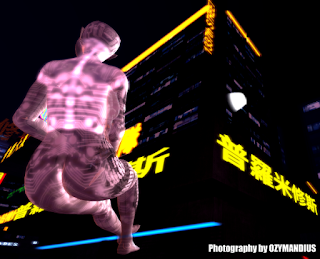 "This is south the corporate area and the most rentals are here in Tokuma Tower.” She said as she floated around my primitive human body. "Behind is IPS HQ the protectors of the city. There is Hot Chicks a burger joint, Terra Firma a coffehouse and bar, AGIS Medical, and Tra's Diner car which was in West too. We also have a moving Sky Diner but at the moment is parked to request by renter. The sim is slowly getting upgraded from sculpts to mesh on all parts.”

So that explained the lack of lag, I concluded as we entered a darker and more daunting part of the city.

"This is where we test weapons and combat meters. Its based off of Kowloon and Shanghigh” Star Raven explained. "a small city perfect for urban combat, we know some of the main city due to the shops and what now can be laggy, so we off here for some fun ... We try to make it easier for everyone. We know how lag kills fun :/"

I had to agree with the little shape shifter, lag does kill fun. But the technology of INSILICO was astounding and our trip to Mars, a six month voyage by space shuttle in 2015, took less than a blink of an eye as we teleported to the dusty red planet. 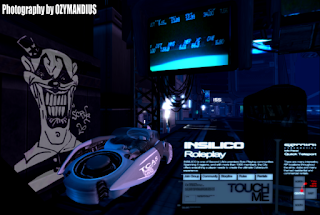 “Welcome to Mars, land of rust and blood.” The glowing guide said with a gleam in her translucent eyes. "Mars RP is more driven by combat then just story. The colonists are attacked by the 1st colonists, the local D'naa, who want to keep the land for themselves after they were abandoned by Earth long ago in its first attempt to colonize. They over time survived and grew its own culture and language. So these new colonists seem like invaders to their land. Nothing is black and white on Mars, only shades of red. The Colonists want to take the land by military force, and the D'naa use terror to claim it back."

I looked around nervously. Happily, the tour through Mars continued without incident but we had teleportation problems getting to the Lyra Station so my guide decided to transport me using a space plane. For a glowing humanoid covered with microchip tattoos, Star Raven was an excellent pilot and I only vomited once during our ascent to the Lyra station.

At this point in the tour it was getting late so I thanked Star Raven, who had spent more than two hours showing me around INSILICO. However it seemed I had only seen the tip of the iceberg so I look forward to my next visit to the future, and hope that the dark prophecy of a dying planet Earth, destroyed by war and pollution will serve as a warning to all of us, that what we need most in this life are keepers and caretakers of this beautiful planet and not destroyers.

Ozymandius
Posted by Bixyl Shuftan at 6:00 AM