Griefers have been a problem in Second Life probably since the beginning. Usually they're bored, immature individuals whom get their kicks out of pranking or harassing people. Little pests. But recently I've heard some news of some incidents that had me worrying.

Since first getting about the Grid, I myself have seen a number of examples at sandbox areas and the Luskwood community. One moment, a guy's peacefully building in a public 'box, and the next his work is surrounded by giant male organs with the N-word being shouted out repeatedly. While visiting Luskwood in the past, on occasion the place was flooded with squares showing some image, usually lame or obscene, or pictures of Mario. The response from the Lusk furs was a collective "Here we go again," and they'd turn off Particle images in their Preferences while an administrator got rid of the emitter. And a couple times while at a Live TV broadcasting, some character walked onto stage and began showering the set with particles. Both were quickly booted, and a little editing erased any traces of inconvenience to the show.

Usually these malcontents have simply been an occasional annoyance that pops up time to time. Although these particle storms could cause one to crash on occasion, the effect was mainly distraction and some lag. Although "The Herald" reported on them repeatedly, other newsletters and blogs have tended to do so sparingly. The most noted article about grieving by our predecessor paper, SL Newspaper, was when the Woodbury sim was hit by grieving attacks. The sim had a strong reputation of being a griefers hangout, so I couldn't help but chuckle at the equivalent of someone robbing a thieves guild. Since then, maybe a sentence or two of some philistine trying to disrupt a 9-11 memorial service. 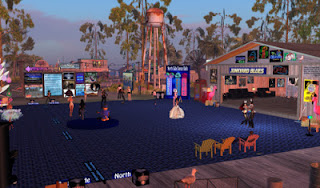 But earlier this month, I've heard about some incidents of griefers whom truly were a serious problem for a location.

Junkyard Blues is an outdoor club that's been in business in Second Life for several years. Over time, a community has sprung up around the place, as well as shops, and some smaller additional clubs. According to an article written by Yordie Sands in her blog, the location was the target of a series of grieving attacks. Not the "Mario Mosh Pit" and the like that pestered Luskwood and other places, but using devices that I had never heard of until reading her post about an announcement by Kiff Clutterbuck, one of the owners.

These attackers used a particularly nasty kind of tool called a "sim crasher." Another name might be "graphics card crasher." Not only could they take the sim offline, but these things would cause peoples' computers to crash by overloading their graphics cards. Sims were sometimes offline for hours or the next day until Linden help during business hours could bring them back online.

Staff and patrons alike began expressing worry that these attacks might cause actual damage to their computers. Not to mention regulars and casual visitors alike began to stay away. They wanted to just relax and listen to the music, not deal with constant threats of harassment. Then came a new wrinkle. The management was sent a message by one of the griefers demanding money in order for the attacks to stop.

This was now an extortion scheme, one with the continued livelihood of the community as stake.

Aside from bringing crashed sims back online, Kiff stated the Lab was no help at all, "All that was available from Linden Lab was the invitation to file abuse reports, one by one, on each individual who attacked us, if we could even give then a name. And then we'd see the same people we reported returning to do it again." The attacks continued day after day, one show being crashed four times. Finally, the decision was made to make the Junkyard Blues club, and most of the community's sims, members only. Visitors could still drop into the one sim open to all, talk to a volunteer, and get a tag after a look-over.

The problem with this solution: making a place members-only can put a limit on traffic. Fewer people able to drop in money in a club's tip jar, fewer potential customers at the stores. Eventually, Junkyard Blues will lift their group membership requirement. But not until they feel the coast is clear.

Sims can cost big money, $300 US dollars a month in tier. If a griefing campaign like this results in a place closing down, that's less money for Linden Lab. If stores and clubs are unavailable for residents to frequent, that's less people buying Linden dollars. That's what this kind of mess directly costs Linden Lab. Indirectly, well, Linden Lab not enforcing its rules about harassment *and* dealing with criminal activity makes people less likely to want to invest time and money in Second Life.

Why Linden Lab isn't acting, we residents can only guess. We've long joked about Linden incompetence. Some people I know have wondered if the Lab can be lazy at times, not wanting to deal with issues even when they have the time and resources. Or perhaps they're simply having Second Life "treading water" while they look for the perfect "shared creative space" for the masses more suited to watching reality TV than figuring out the Grid's learning curve.

Oskar Linden's dismissal in November also raises a few questions on the matter as in his words "the root of it was complaints from a griefer whom I had banned from a private testing sandbox that I managed after he was harassing people and threatening to crash them and the region." A Linden fired for protecting residents against griefers? The Lab has been distancing itself from the residents, and it's believed they strongly dislike its employees getting involved with the residents. But has this unofficial policy gone to the point that even protecting residents from griefers is forbidden?

Or perhaps this is an example of how bad the dysfunction at the Lab has gotten. On the Second Life Universe forum thread Oskar Linden announced his dismissal, one poster commented "your firing is an example why employees 'freeze' when trying to make decisions on their own …" Another thought, "The result will surely be that the few surviving LL employees will do even less banning of griefers now. Why bother ARing grievers now, as the poor drudge who deals with your AR will be scared to take effective action."

So perhaps that the assault on Junkyard wasn't dealt with by the Lindens was a consequence of Oskar's dismissal: they were afraid what supposedly happened to him from banning a griefer would have happened to them. If so, the Grid's residents could truly be on their own when it comes to these troublemakers now able to crash people's computers, whether it be taking the "law" into their own hands, getting the help of a vigilante group, or bite the bullet and "hunker down" until the problem goes away like Junkyard did.

Yordie Sands did mention one possible solution: the Lab offering countermeasures for sim owners against griefers. Someone commenting on her article suggested residents had already made some countermeasures, but there was some debate on how effective they were, one wondering if they tended to attract griefers instead of being a shield.

So how could this end? Honour McMillian wrote in her blog the end result could very well be someone taking Linden Lab to court over it's failure to enforce it's terms of service. Crap Mariner commenting on her article wasn't so sure if many residents had a big enough investment in the Grid to get a lawyer on the matter. But if one of the few large land barons ended up the target of griefers and the Lab did nothing, then the Lab could very well be hit with a lawsuit.

With the Second Amendment being debated in the US in real life, the Junkyard incidents could very well be used by the pro-gun side in any debate in Second Life. Rules against the ownership of weapons are no help to the public when those in charge make no real effort to protect the public from those who buy or make them anyway and then use them with impunity with no fear of punishment.

I contacted Kiff Clutterbuck about the attacks, but he declined to be interviewed, "I think for now we are sort of burnt out on it."