More on CBS and "Star Trek" Content in Second Life

Last month, CBS was contacting Linden Lab and several content creators about the latter's merchandizing of "Star-Trek" related items. As the owner of most of Star Trek's copyrights, CBS demanded they remove their items from SL Marketplace and stop selling them. Recently, a number of Trek fans met up to discuss CBS's moves, and what to do about it. 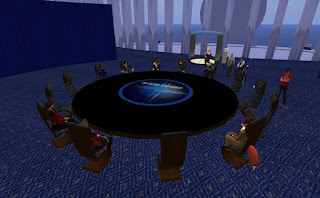 About a dozen residents, including Vic Morrington (Victor1st Morrington) of the Dr. Who community, and "Examiner" writer Doc Grun, were present at the meeting. Doc Grun stated he had written to CBS about the matter. "CBS has declined to comment, and has also declined to be interviewed," he stated, though several CBS employees had checked his Linkedin profile since.

The incident was compared to when Universal contacted Linden Lab about Second Life's "Battlestar Galactica" content. With "Battlestar," sims and groups had been closed until Universal until an agreement was made. This time CBS contacted both Linden Lab *and* several content creators. Doc called it, "That is using an atomic bomb to swat a fly." But unlike then, no sims or groups had been taken down. Vic suggested CBS was looking for a quicker resolution, "direct contact with the seller makes for much quicker conversations between CBS and the person they contacted without going through the middle man: Linden Lab." That is, those departments of CBS involved, "It wasn't a full shut down 'cause the top tier of CBS legal department never got involved in this, it was the clerks."

So what were CBS's goals? The language in the letters CBS sent left much room for interpretation, "Immediately cease all creation, distribution, promotion, and sales of the infringing products. … Refrain from advertising, selling, and positing the infringing products in any format on the Second Life Marketplace, and at any other websites or locations where you may be offering and/or selling the infringing products." Was CBS trying to stomp out not just the selling of Trek content, but Trek roleplaying as well? Vic disagreed, "They only came into SL to get rid of the folks selling IP violation items, there was no sign of them trying to close down the RP groups within SL." Doc Grun seemed uncertain, saying, "you all have contraband you see, every one of you is wearing stolen goods. Lawyers are there to take on trivial sh*t like the end of the world mattered on it." But was CBS trying to wipe them out, "They have not made that clear, at all. You are literally in limbo."

The residents had various different reactions. One had deleted all Trek items off his Marketplace account and no longer made it. Another had kept going, "I will never listen to any one that tells me to stop my RP and building of trek whatsoever." It was the impression of those meeting the Trek community as a whole would keep on roleplaying, CBS be damned. If nothing else, there were other virtual worlds besides Second Life, one saying, "You'd be surprised at the number of Trek groups that have left Second Life for other grids, sometimes private grids."

Despite the lack of clarity from CBS, Vic suggested keeping the emails to them at a minimum, "as someone who used to work for Paramount, if you folks keep prodding CBS looking for an explanation, they will take that stick you are prodding them with and are liable to just say 'screw it' and beat you all over the head with it. As I explained COUNTLESS times to the IFT folks, you do not 'deal' with CBS."

Following the meeting, Doc Grun made his own column for the "Examiner." But the title of it, "CBS Moves to Stop Star Trek Content in Second Life" sparked some controversy among some Trek fans as needless scaremongering as more than one thought it was suggesting CBS was after all Trek content, not just that which was sold. Edconnect Gufler of the Trek Museum remarked in one chat,"He has no credtibility." Others suggested giving him a break, saying he did try to get the facts and talk to CBS. Then came an announcement from the IFT group that suggested negotiations with were suspended:

I have been playing e-mail tag with the office of the Vice President of Licensing & Intellectual Property Rights, Liz K. (technically her exec. asst. Brian L.), at CBS. They really do not like it when someone else tries to intervene after establishing that I was the point of contact in SL back in 2009. As a result, I believe they have ceased all talks. So, a sarcastic thanks goes out to whomever interfered. At any rate, until told otherwise, keep things status quo, short of selling copyrighted stuff.

For now, the question of the fate of Star Trek content in Second Life remains not yet resolved. Chatting with some in IMs and group chats, some see CBS has no real legal claim to shut down Trek RP groups and sims with freebie goods. After all, are there no shortage of Star Trek costumes in real life science-fiction conventions? Has not Gene Rodenberry's son appeared in Second Life and seen his father's work recreated here, and not having a problem with it? But others are not taking chances, heading on to other pastures, such as OpenSim.