For Xmas my brother got me Torchlight 2 from steam and I have been playing on and off since last month. For fans of Diablo 2 and 3 this game is a welcome addition to the dungeon crawler mouse clicking genre. Where Diablo 3 seemed fun at first, but it got stale and repetitive every time I played it. Torchlight 2 seems fresh every time I play it. 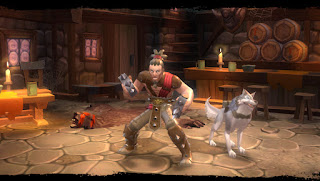 The Alchemist from the first torchlight series as a magic blasting class was corrupted by the Ember Blight coming from the Heart of Ordrak in the original Torchlight. The game progresses as your character chases after him as he creates chaos in his wake. So far as I play through the game the first act is basic plains. The second act is a desert, and the third act is a forest.
The four characters you can play as are the engineer which is your melee brawling character. The berserker is another melee class using animal based attacks. The ember mage is a wizard class, and finally the outlander is a gun toting ranged class with some magic ability. The Outlander is my main character as he seems the most fun (in my opinion) to play. Not to say the other characters aren’t fun either as I dabbled in the other classes
When you create your character you’re not stuck with one character appearance as you can pick out hair color and style and skin tone along with the gender of your character. 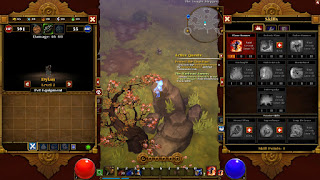 Like the first Torchlight you have an animal as your sidekick to go to town and sell trash and help you fight the baddies that stand in your way. In the first Torchlight you could only pick a dog or cat as your animal ally. In the second Torchlight you can pick from many more including a panther, hawk, badger and owl along with the original dog and cat and you can also change the animal fur color as well. You can also feed your pet fish from fishing that change your pet into different kinds of animals to boost kitty’s fighting ability like an armored crab or a mole that can stun enemies. Fishing itself isn’t hard or time-consuming so fishing for your pet is rewarding to give your pet a fighting edge.
One thing I can say about Torchlight II is how fast your character levels up. Whereas Diablo 3 you slowly level having to repeat acts to level up the game pace in Torchlight II is just right as it seems I progress through the game and level up at a rapid pace. In addition to that I was happy to play through the game as I got a fair share of treasure to sell as fodder and weapons and armor to boost my character. Green is good, blue is a lot better and orange is legendary. Your pet gets gear too as collars and tags.
The difficulty level is just right too. A turn off from Diablo 3 was that towards the end of the game it was no fun to play anymore as my character died if a bad guy sneezed on him. As I’m in the third act now the game play difficulty is a happy medium. Sure I die now and again, but I’m not dying constantly. A definite plus in the game is I’m not punished for dying. When I die I’m given a choice to go to the start of the dungeon I’m at costing some gold, or start back in town costing nothing. The no-brainer choice is use the town teleport scrolls as I progress along and start in town losing no gold. No cash eating repair bills in this game.
Each time I level up I get 5 points to assign attributes such as focus to increase magic, dexterity, and Strength speak for themselves and Vitality to boost hit points and defense. Using the outlander I was dumping a lot of points into dexterity increasing his critical strike chance while throwing the rest into Strength and Vitality and rarely in focus. So far this seems like the right way as my outlander named chair is shooting down baddies pretty well. 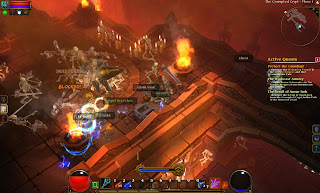 You also receive a single point to put into your character build. Thinking this is a gun toting character I put a lot of my points into gun abilities (Warfare) boosting his rapid fire (right click on the mouse) among other ranged attacks. Plus I have been boosting his overall damage using dual wielding pistols and increasing his attack range and damage. So far it seems like a winning strategy. As you level up new abilities are available like a rain of poison arrows that do a LOT of damage in a certain radius but this was only available when I hit level 42 chair is now near level 50 in the third act. The other characters have skill trees as well with different abilities as the embermage has fire arcane and frost to play with for example.
Something that helps keep the game fresh is like the popular game "World of Warcraft," in-town NPC/s ask you to do quests to progress through the game so you’re not mindlessly killing monsters to gain experience/gold/gear. Makes you wonder sometimes why those lazy NPC/s can’t do the quests themselves. On top of that the bosses so far were a thrill to fight. They were tough making me constantly guzzle potions to keep my hp/s and magic up but they always dropped great gear and gold.
There are slots to place gems in armor and weapons for elemental damage or adding to your elemental defense against say poison or fire. Also enhancements you can pay an NPC to enchant your gear that is expensive, but worth your gold. Torchlight II gives you plenty of ways to boost your character
All in all I’d say Torchlight II is a blast to play with the option to play with others, but for now I’ve been killing baddies solo wanting to progress at my own pace. I may try a multiplayer game with another character like my embermage, but for now I want to keep shooting down bad guys on my outlander. The only flaws I can think of are that I can only repsec three points on your character’s skill tree if you want to change. The music is okay, but not amazing. However the sound effects make up for it. If you get the chance buy Torchlight II from Steam and have a ball killing baddies and more.
Grease Coakes
Posted by Bixyl Shuftan at 6:00 AM