By Grey Lupindo
Long-time SL resident and SL Newser reporter Grease Coakes just published his first book, Ginny Griffin's First Day of School.  Grease is traveling around SL as a pink avi to promote its publication and the brave little girl who is the protagonist.   We met early one morning at my home on Syzygy to discuss the book and Grease’s publishing journey.
Ginny Griffin’s First Day of School is about Ginny Griffin, a third grader who moves with her parents to Spoonville, a totally furry world.  Because she’s the “new kid” and doesn’t know anyone, she's scared to go to the new school.   “But Ginny certainly has an exciting first day of school,” Grease explained.  “It's not a run of the mill day.”   The little griffin learns bravery as she goes up against incredible odds, although Grease wouldn’t reveal what specific hazards she encounters.    Those revelations would spoil the book for readers.
While this is his first published book, Grease has been writing for many years.   “I remember as kid I wrote some and read a lot,” he said.    He has also been writing and publishing a lot in SL, both as a reporter and on other projects.    As we discussed his book, it became obvious to me that Ginny Griffin wasn’t the only one who faced incredible odds and triumphed.   Here is part of the interview that I conducted with Grease. 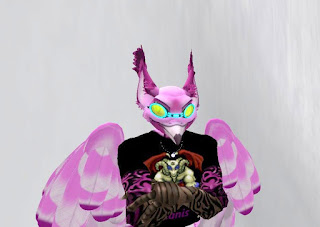 Grey Lupindo:    Is this a book for young readers or one for parents to read to children?
Grease Coakes:  At 18 pages, I would think that children could read to themselves.  Or perhaps adults could read it to their little ones.  Or, adults could read it themselves for kicks.  Adults might relate to Ginny's struggle with their first day at a new school.
Grey Lupindo: How did you get the idea for Ginny's story?
Grease Coakes: I always thought it was neat looking at those Richard Scary stories.
Grey Lupindo:   Oh, yes.  I remember those.
Grease Coakes:  So I thought, wouldn't it be neat to write a story with similar characters?   I associate pink with girls so I made Ginny pink.  Her mother is pink, too.  So it's in her family.”
Grey Lupindo: Yes, very appropriate.  ....  Is this your first children's book?
Grease Coakes: Yes, but I have written other stories.  A lot of them aren't meant for children.
(At this point I see Grease smiling.)
Grease Coakes: I sell myself at tail sales for furries to use my writing services for less savory themes.
Grey Lupindo:  Oh...well...moving right along....What surprised you the most about the process of writing a children's book?
Grease Coakes:  It was a lot harder than I thought to get it published AND hard to look around for an artist to draw the cover picture. ... I knew a publisher via her phone number found off a website. She was supportive and helpful, but in the end she told me she would not publish my story.
Grey Lupindo: It's very hard to publish, especially in the last few years.
Grease Coakes: Yeah, it is.  Plus I had to keep editing and changing it as I got feedback from my friends.  So I've been working this story since my inception in SL, which is what... 5 1/2 years now. 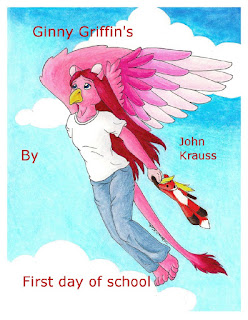 Grey Lupindo:   Did you do the cover?
Grease Coakes:   Oh, goodness no! I can't draw worth a booger.   Perri Prinz told me about her friend Lampie.   I looked over her website and her pricing.   I think her artwork is simple and colorful, but also very professional and neat.
Grey Lupindo:   You said you received feedback from friends.  Were young readers among those friends?
Grease Coakes: No, this came from an old friend in SL. She read it over and hated the ending so I re-wrote it altogether.  I showed it to other friends, and they liked it.  But I think they were biased in my favor....   This friend was honest saying this won't work.
Grey Lupindo: The original ending?
Grease Coakes: Yeah.  I ended the book too easy, with not a lot of conflict.   This time I made it more exciting and more believable.
Grey Lupindo: Ah, yes. It's hard to make your characters suffer.
Grease Coakes: But also my characters have to grow.   I mean as a child just doing what your parents tell you is suffering.  Or being pushed around by the school bully.  No one person lives a carefree life.   Life doesn't work that way.
Grey Lupindo: Is there any bullying in this story? That seems to be such a hot issue right now.
Grease Coakes: There could be.
Grey Lupindo:  Is there anything else that you want readers to know about your book or the writing process?
Grease Coakes:  All I can say is, if you believe in yourself and apply yourself, anything is possible.  If you keep at it. I mean I could have just given up when someone didn't draw my picture for me after I paid in Lindens.
Grey Lupindo: Did that happen?
Grease Coakes:  Yes, it did.  And when I IM’d her, she gave me a rude response.
Grey Lupindo: How terrible!
Grease Coakes: I said the hell with this.   Let me look for someone else.  Luckily when I ran into Lampie, she was very professional and very swift.
Grey Lupindo:  Who is the publisher? How can people buy your book?
Grease Coakes:  That's easy.  They can go to http://www.lulu.com/shop/john-krauss/ginny-grffins-first-day-of-school/paperback/product-20635273.html    I have the link in my picks, too.
Ginny Griffin's First Day of School is available from Lulu Press for $12.00 U.S.


Grey Lupindo
Posted by Bixyl Shuftan at 6:00 AM