So seeing there was a new MMO flavor of the month and I had a few extra dollars to spend, I thought "why not, it'll give me something to do while waiting for Torchlight 2 to come out." So I went and got the game "Tera", by some Korean company that, according to their wikipedia entry for the game, saw a touch of legal action before release of the game (but won).

So after picking the game up and playing through the first 25 levels... 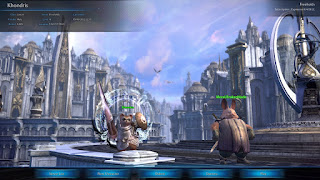 The artwork is very attractive. If it's something this company knows how to do, it's graphics. If your computer can handle the powerful graphics, turn the settings all the way up and you won't be disappointed. If you like breathtaking vistas, you'll like Tera; the graphics are better than both WoW and Rift. I won't say better than both combined because the background is kinda "comical" and maybe just a little bit cartoony (lack of better words); Rift has it beat on realism. The general premise of the game is different than most: no factions like the Horde vs the Alliance of WoW, or the Guardians vs the Defiant for Rift. Here, it's harmony. Well almost, there IS PvP elsewhere. The idea is that two titans dreamed up the world and everything on it. Now some creatures called "argons" (mechs? robots? I'm not sure) are hell bent on wrecking the place and making griefers of themselves.

Combat is interesting in that attacks have weight and visible power behind them, if you miss with a big slam and they move out of the way you leave yourself open as you recover and could get knocked down or one-shot. If you don't time your attacks and just mash buttons (as I am used to doing), you are not going to get very far at all.

While the premise of the game is good, the interface is crap. I'm used to clicking and dragging the view around, the same way as most other games out there. Not so with Tera; either the mouse controls the camera (leaving it unable to click buttons for special attacks because moving the mouse moves the camera) or right click buttons, leaving it impossible to change the view quickly if you have enemies attacking from several sides at once. This does mean you have to actually have some skill to play, though. It's not a point and click game by any means. I chose a "tank" class (the kind of player that stands there and keeps the enemy busy while others shoot them down), and tanking is -very- hard if you don't get the timing just right (due to the whole "all actions have weight to them" mechanic). 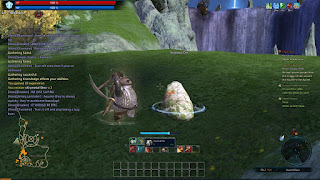 The outfits are mostly T&A --- some of these waif girls should either be toppling over paralyzed or have their own gravitational field coming from their chests that is powerful enough to snag Jupiter. Most of the outfits look exactly the same and are divided up into "tiers" (all armor and weapons of the same tier look alike) that can be "dyed" (which is both expensive and temporary) in order to customize them. I haven't bothered with that, as armor's armor and weapons are weapons... as long as they get the job done, who cares what they look like. Function over form, as it were.

The crafting is very very "overdone" --- many many things need to be crafted in order to make even the most basic of items. This has led me to not even bother with doing crafting, despite the fact that the game says crafted items are more powerful --- I've gotten by just fine on what I have and I'm almost half way to the level cap as it is. Questing seems like it's the standard fetch/kill x of y type, so nothing new there. No clicking or running over to pick up fallen treasures either; that's also all keyboard based. At least you can't pick up stuff that "doesn't belong to you" though I am unclear if things "revert" to a free for all after X minutes of no pickup. 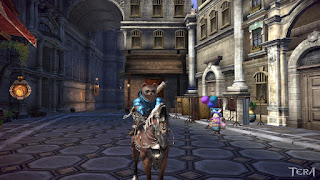 The classes seem to be a mishmash of strange things. I think the company that created this tried a little too hard in order to seem "unique", and created a congealed mess, class-wise. Warriors are leather-wearing dualwielders and the game's "tank" class (the Lancer) wields a lance and shield -without- being mounted (wouldn't that be, I dunno, really unwieldy?). I haven't tried anything with the caster classes. I think the game company may have felt threatened by the upcoming Diablo release and wanted to get their game out.

The races are cute; everything from a resistant-to-everything (up to and including the heat death of the universe) warrior to a cute little "enlightened animal" (whose race is "all males animals, all females cat-or-bunny girls"), give something new to the table.

Overall, aside from the artwork being worthy of being better than god, I am still kind of unimpressed. At $60 + a subscription fee + middling customer support after three days of waiting about something, I am going to say unless you like shiny anime-ish artwork and an interface that makes you want to rip your fur out while trying to figure it out, give this one a pass unless you have the loose change and the time to spend on it. The game has good intentions and somewhat good ideas in spite of there being no real unique ideas on the planet anymore, but has a Linden-level ability of execution in that UI until people learn it and get used to it, which is something I am still trying to do twenty five experience levels into the game. I'm going to give this one three dragon hoards out of five, and that's being nice. It's growing on me just a little, but not enough to give it any more than three hoards.

Torchlight 2, on the other hand, when that comes out? THAT will be worth every penny and more of the $20 it will cost...