Among the clubs at the FCA club alliance, Castaway Cove hasn't been used much lately. Cutlass, Club Zero Gravity, The Cocktail Lounge, and the Happy Vixen all have regularly scheduled events. But with a number of DJs getting caught up in real life, one club, Castawave Cove, despite it's unique design of a beach club between two halves of a shipwreck, was getting only occasional events. People came by to hang out to play it's games, or shop at the vendors there. But parties there were irregular. 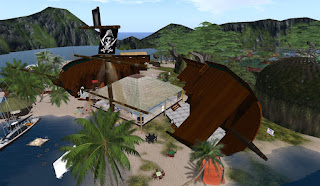 Finally on the evening of May 14th, Nydia Tungsten, the owner of Castaway Cove, made an announcement. The club would be closing. But there would be one last party there. DJ "Purple Puppy" L'sai would be playing the music. And true to her nickname "Naughty Nydia," the vixen decided to give everyone a chance to let their hair down with a nude party with a huge prize on it's "Last Hurrah."


Castaway cove is having it's final party tonight, come dance the night away as the original purple puppy DJ L'sai spins her tunes for us, but we aren't going out with a whimper but with a BANG! $3000 L's will be up for grabs at this final Naked nite. Your'e all invited. Starts at 6 pm SLT. SEE YA HERE!! 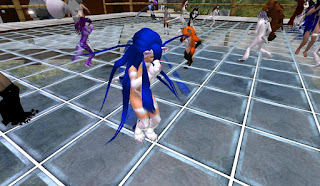 And as 6PM approached, people headed over to the Kalmeere Paradise sim and dropped in at the club, a collection of over two dozen human, neko, and furry avatars. Many went "au natural" for a chance at the Lindens. But others kept on a swimsuit, not really competing for the prize but just coming for a good time and to see the club one last time. People sent requests to L'sai, both popular tunes and some parodies by Second Life musicians SonicBlu Darkfold, and a few riskee tunes from Corsi Mousehold.

During the party, Nydia gave an explanation for the club's closure, "Many have asked why we are closing. Well here it is. Castaway Cove was created to create a draw to a new sim, to generate interest. Well it has done its job. the Sim owner needs to start renting this land, so we will be closing. But not forever who know what lies over the horizon. I just hope you have all enjoyed our run, and if your'e interested in the land, just send me an IM. Just remember to party as if it is your last, because some day it just might be 'Eat drink and be merry for tomorow we lose our club!' "

For two hours, the party went on. Then the 3,000 prize was voted on, and then given out. But this wasn't the final word on the club. The following day, Nydia had the following announcement:


We're Back! … We had a blast last night, and we partied into the night. Every one was sad to see the club go but not as much as Skylark Lefavre. Due to her most generous offer, Castaway Cove will be around for quite some time. So if you see her, thank her for being our clubs benefactor.


And so, the pirate club continues. Word is, there will be some Primtionary game events at the sim again soon. For anyone interested in managing or DJing at the club, contact Nydia Tungsten.