In the vast universe of the virtual world of Second Life, there’s more to it than a myriad of clubs to fight for your patronage. Gemma reported on a theatre sim for MST3K fans for example. Take another odd step and you can find a sim devoted to Brahma holding meditation classes in Brahma yoga a few times a week. Who is Brahma you ask? Brahma is the Hindu version of god who is the universe that we are all a part of. 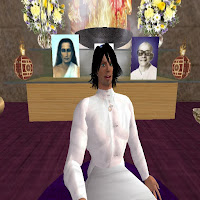 Wait what? A meditation class here in Second Life? As odd as that sounds there is a teacher or as his title states “Guru” which is a Sanskrit word meaning teacher or master. I know him first hand as Pramiil Magne and he is my Guru in Second Life.

For almost 5 years now Pramiil has been a guru here in Second Life and a real life guru for over 30 years. He has said a few times that he wanted to expand his teaching. So he takes advantage of Second Life to hold classes for people all over the world. For example one of my classmates is from Germany. As well holding classes in real life in Australia, he holds them in various ashrams on his sim. For example the Tuesday class at 4pm SL time is always held at the Shiva temple.

Pramiil’s role as Guru is to impart spiritual knowledge along with to be shortcut for people like you and me to jump directly to Brahma. How does he do that? Pramiil generates Shakti like an electrical generator which makes it much easier for the average Joe or Jane to meditate. 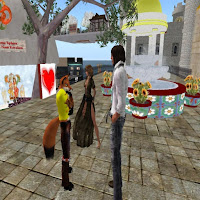 In Hinduism there is the chakra system like a spiral within the soul of the human body. Humans have 7 chakras, animals only have four chakras. A chakra is an energy center that holds life force or kundalini. Fox animal totems trigger the awakening of the kundalini.

The base chakra is the lowest chakra at the base of the spine. The sacral chakra is next as the sex organs for both men and women. Next is the navel chakra around you guessed right your navel. A chakra that represents love which seems obvious is the heart chakra.

Next which represents commutation is the throat chakra, which is at your throat for speech. Next at your forehead is the third eye which allows if strong enough allows you to see and hear spirits. Finally the seventh chakra is the crown chakra at your forehead or crown of your head. A good way to know that all your chakras are filled is if your hands are warm.

The goal of his classes is for everyone to reach liberation and to rejoin with Brahma. As he states within class we are souls that yearn to be back with Brahma and feel his eternal love. Liberation only happens when you have burned away all your karma. Karma is generated through action and reaction. For example bullying kids for lunch money makes bad karma and supporting a nonprofit makes good karma. Nobody wants bad karma, but even good karma should be burned away to reach Liberation faster. Pramiil states this is the goal of all human souls to rejoin with Brahma.

How do you burn away karma? With fire of course! When anyone meditates karma is like cotton wool is the example Pramiil used to describe how easily karma burns away. Meditation burns away a great deal of it. 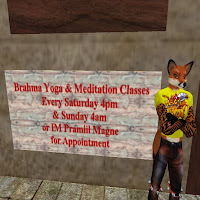 So if you have a burning desire to get closer to God or you’re at least curious check out one of his classes during the week here are his class times.

By Grease Coakes
Posted by Bixyl Shuftan at 6:00 AM