Cyfir: What inspired you to create The Second Life Avatar Index? 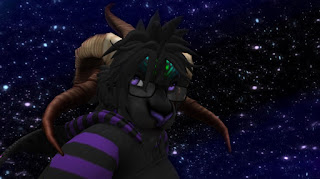 Blau Rascon: From mid-2011 through early 2013, I was a writer at a similar site called Second Life Avatar Review Files (SLARF). I loved writing for SLARF, but when I was brought on at KZK, we decided that it would be better if I retired from writing there to help avoid any conflicts of interest. I stayed on as a senior staff member, but the site got quiet not long after. SLARF is now inactive, and currently only available to visit through the Wayback Machine. I was pretty bummed to see that - it was a really good resource, and I had hoped it would go on for longer.

I put out a poll last September to see how the community would feel about me starting a similar site, and the response was very much in favor. The first three entries were published on September 25th. It feels good to be writing again!

Cyfir: Can you tell those who don't know what the site is about?

Blau Rascon: The Second Life Avatar Index is a website dedicated to cataloging avatars - primarily, but not exclusively, anthropomorphic / "furry" avatars. The goal is to have a place where people can come and browse avatars, discover new creators, or share entries with friends.

Given that I currently work for an avatar company and know that there are some who would be uncomfortable with a competitor's employee writing reviews of their avatars, I don't write traditional reviews; rather, I present data points about an avatar, in an effort to be as neutral as possible in my writing.

Entries include a text section describing the avatar's features and details, a gallery section including turnaround images, HUD images, and an imgur album of detail shots and GIFs of animations, and a video including a 360 turnaround and a demonstration of an avatar's functions and features, if applicable.

Cyfir: How has it been received by the community?

Blau Rascon: So far, the feedback has been pretty positive! I've gotten some IMs from folks that were pleasantly surprised to see their works on the Index, which always makes my day.

Cyfir: What are your plans for the site in the future?

Blau Rascon: I plan to move the site to its own host in the semi-near future, which would allow me to do some more neat things with plugins that I can't currently do while hosted on Wordpress. One of the ideas I had was to make a calendar and allow avatar creators to add events like release parties to it, and I'd like to see if that could work someday.

Many people would like to see mod parts / modkits on the Index - I'd love to add them in, but for now, I'd like to keep the site focused on full avatars. There is definitely an interest there, though, so I'll be revisiting the idea when I can!

Cyfir : You also work at Kinzart Kreetures. Can you tell us what you do there?

Blau Rascon: I do a little bit of everything - beta testing, troubleshooting, moderating, demoing, keeping things organized, and so on.

Kat is often not logged in to SL while working to keep himself focused, so I help handle most in-world things while he's unavailable.

Blau Rascon: There have been some long delays due to in real-life events, but we're working on finishing up the bug-fixing and preorder bonuses for the Direwolf hybrid avatar we released a few months ago. No set dates for these, but we're doing our best to get them out soon.

As thanks to our community for sticking by us through these rough times, we're doing a pretty neat project. Together with the community, we're designing an original anthro avatar that will be given away for free. We're doing several phases of polls to determine the details. The species basis is still being narrowed down, but as of writing this, the species will be a hybrid of "Eastern Dragon" and "Canid - Misc / Extinct". There will be more polls coming to determine things like whether or not it'll have wings, what kind of tail, what kind of legs, and so on. I'm excited to see what will happen!

If folks would like to keep up with the project or participate in the polls, they can join our in-world groups or our Discord.

Blau Rascon: I'd like to tell folks - keep making cool stuff! And even if you think you can't draw, or model, or mod, don't be afraid to try. You can learn a lot just from tinkering!

And something more personal, drawing from recent family events - please consider donating blood and/or bone marrow if you are able to. There are many people that need the help!

I personally think that the Avatar Index is a great resource for those wanting to browse different avatar options and I’m looking forward to seeing what the free avatar will be like from KZK!

Cyfir
Posted by Bixyl Shuftan at 6:00 AM