Just as Montecito Bay has been putting the slime and maw monsters behind them, there's a new mystery afoot. My first clue to what was happening was a group announcement by Becky Nostferatu on November 24.

I swear I just saw lights, guys. All over! And now, we're getting some weird circles on the ground... so strange. I wonder what it could mean for the sim? We better keep our eyes open! 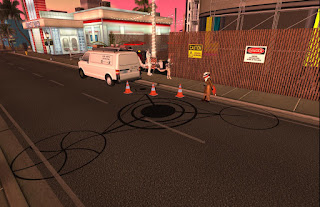 But it wasn't until a few days later when I dropped by the sim. I talked to a few people, Moff (MoffettMephit Resident), Emorald Resident, Lem Aiko (LemonPledge Resident) just outside the Magnum Opus, the "MO" still under reconstruction with scafolding outside the building and the "Crux Construction Company" signs. Kardinal Klo (Klomonx Resident) was working on it, "Okay, I need to do the under colors, and the dome texture and move the windows out if they haven't yet." Lem, who was in his hard hat, might have been helping him but at the moment was taking a break.

As we talked, I noticed some markings on the road, like the "crop circles" seen on TV news and social media occasionally. I then brought their attention to it, "Say, what's that on the road?" Moff replied, "Oh, some degenerates playing a prank, or something. Street department hasn't had a chance to clean them off yet." Lem's answer was, "I dunno, they just appeared there. (I'm) pretty sure kids are spray painting them." Emorald answered, "We THINK some kids are just spray painting it. Not sure yet." 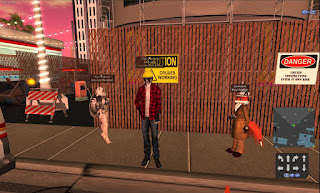 I looked to Emorald, "What do you mean 'we think?'" He shrugged, "That is the best guess I have honestly." "Cops couldn't prove it yet," Lem told me. "Why not just pressure wash it off?" I asked. Lem answered, "I ain't getting paid for it. It'll eventually wear off." Emorald told me, "It was done once, and was back the next morning." "Any more of these?" I asked. Emorald answered, "I have seen a few." Lem told me, "Yea, at every intersection. A lot of paint wasted, Must be a college prank." "But yeah Bix," Emorald commented, "who ever is doing this prank, A+ for effort."

Moff then had to leave for something. I then brought up Becky Nostferatu's group message, "Checking the Mont Bay bulletins, Becky says 'weird lights' showed up just before these circles." Lem told me, "As far as I know, the only cameras that caught anything was the ones at the gas station, they saw some sort of black shadow fly across the screen and then the ones facing the intersection went dead." "So that's all that was noticed before these weird shapes?" "I think the weird lights were kids playing with high power laser pointers. They will kill a camera very fast. It's all a big hoax, though a well put together hoax. Like I said, they get points for effort."

I then asked, "What are some of the (other) locals saying?" "There's a guy over on the east side who swears he saw some flying saucers," Lem answered, "I think he's on something." Emorald asked him, "Was that the same dude that got evicted from that one abandoned building Lem? I think he was living, next to the hotel?" Lem answered, "I don't know, but he snoops around my warehouse a lot too. The guy is a conspiracy theorist." Emorald added, "I know there was a guy living in that building, had to really clean the place up. Someone had a hell of a drug lab there." "Yeah, you wonder who was responsible, but innocent till proven guilty." 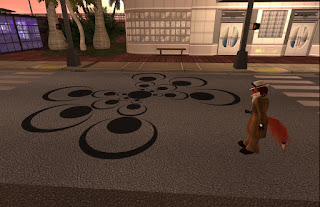 Not long afterwards, I bade farewell to the two, and looked around. Sure enough, there were more of these strange patterns on the asphalt in other places. Either they were done by a machine, or the painter had a very steady hand. I did notice one building with a few strange pictures. But before I could take a picture of it, a huge spider appeared, which freaked me out to the point I forgot about making the shot. Normally such enormous arachnids are found in the tropics. But considering the recent maw monsters and now these street circles, well, know knows?

And so Montecito Bay now has some more weirdness on it's hands. Or considering the Cruxes, additional weirdness. What happens next? Time will tell.