Before learning about Second Life, I was developing skills at making animated videos, for teaching purposes. Upon seeing samples of my work, a friend suggested I check out SL. The dragon in the video was named Katzu Kwattle (Quetzalcoatl) and his mission was to teach the principles which are the ancient foundation of every religion on earth.

One of the main reasons for joining and staying in SL was that it might provide pictures and animations that could be used in teaching the Ancient Wisdom. Over the last four years, we have developed avatar's personas to fill this mission. The exotic dancer (stripper), Becky "Sha" Shamen, becomes an enlightened member and supporter of "Community". With her theory that "Heaven is for Heroes", she becomes an explorer/Journalist, encouraging readers to embrace their inner Indiana Jones and go exploring in SL. Over time, several alts have been developed, in the hope that these could springboard to better prepared teachers. This process of spinning out new alts began with "Bach Shamen", Sha's brother. A separate account was used because, although Sha could change her display name to male, the account name would show his real name was Becky. We should note here that, many males, she had met, said that females had it easier than males, in regards to earning money and finding love in SL, so this added to the reason for trying a male avatar.

For about two months, Bach made slow progress, with getting L$ and girl friends, disproving the M/F theory. Then, he got sidetracked by the very means of his advancement. Wanting more wealth and friends, he turned from his inner mission to follow his older sister's path. Sha's brother morphed into her little sister. This "new" character served no purpose, other than just being a copy-cat, so eventually faded out of SL. 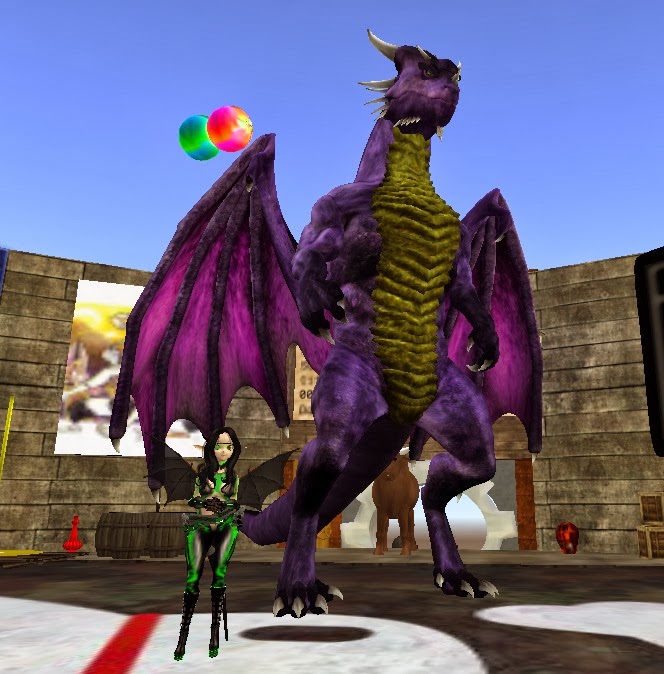 As a reporter, Sha felt that a male avatar might be better suited to some of the sims and adventures being covered. Since snapshots of him would not show names, she made a male alt, within her own account and called him Joshua Xavier. Josh appeared in a number of articles, under Sha's Newser Byline. Ultimately, a new SL account was opened for Joshua and he soon changed his display name to Josh X. Of note here, although Sha and Josh share the same oneness with this writer and have similar qualities, they have distinctively different personalities and sometimes even disagree on things.


Now, as his own man, Josh is also a reporter for the Newser. As a Scientist/Philosopher, Josh's stories span a different end of the spectrum from Sha's and may even fall off the scale of what will fit in the Newser. For writing "off the scale" stories, Josh would need to create his own, larger than life alt. After reading Xymber's article on SP Dragon Guardians, it seemed a good idea to reincarnate Katzu, into SL.

Josh did some detective work and tracked down Spider's shop on MP and inworld. At L$2,899, it was more than he could afford, so Sha sent him the needed funds. After the Friday night theme party, at Cutlass, Josh logged off and went to the marketplace.  Returning to SL, he opens the package and puts on the new avatar. Right away, we discover this avatar is way more complicated than just switching from human to furry. Knowing it would take weeks to perfect, we were still eager to take it out for a test drive. We changed the color of the belly scales, to match the original, christened him "Katzu Kwattle" and headed to Cutlsss, to find stragglers and compare the size and manuvering differences. Our friend Val was there and we had a long chat, as I played with finding good camera angles to capture the dragon that is the same height as the club's walls. 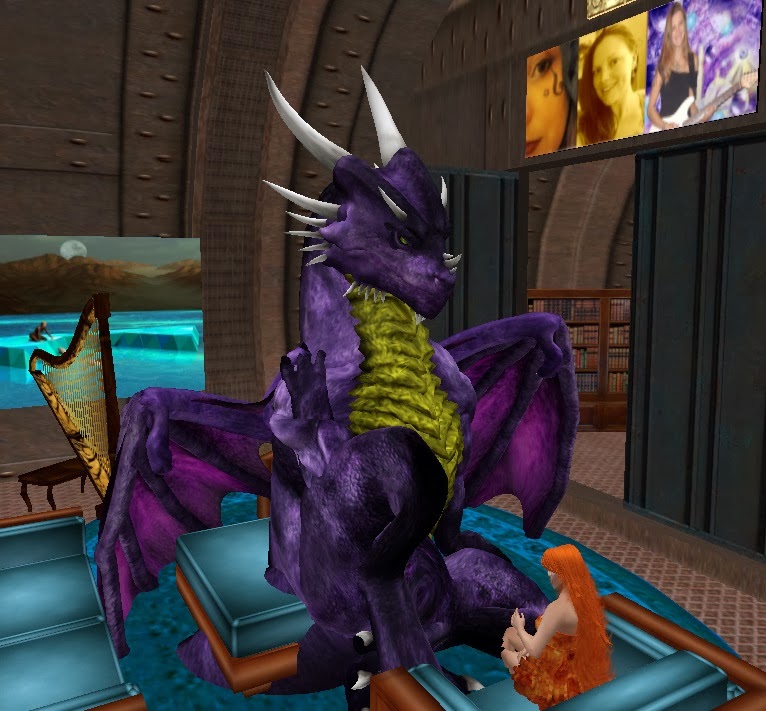 Although Josh and Katzu can't be on SL at the same time. using two viewers, either can meet up with Sha. Such meetings are hard on our notebook computer and both Katzu and Sha have more than average draw weight, as avatars go. Still, we wanted to see if it could be done, so Katzu came on, using the SL Viewer and Sha came in, using the Nirans Viewer. With great effort, we set up a snapshot of Sha, dressed in colors of fire for an upcoming theme, interviewing Katzu as to who he is and what his mission will be. That conversation shall not be given here, but shall reverberate in the writer's mind, in the weeks that follow.
Within days, we learned that it was much easier to navigate and take pictures of Katzu, when he walks on all four, a.k.a. quad mode. 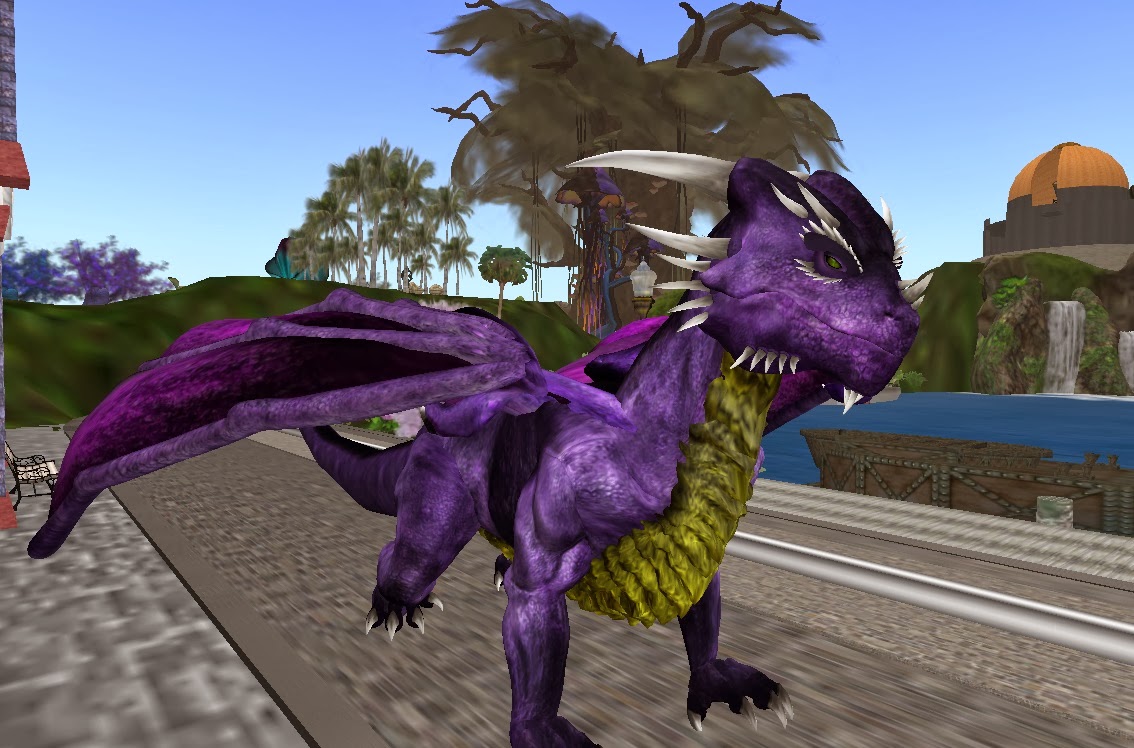 Getting used to this avatar is like learning a new software or viewer. In the long run, his high cost is offset by not needing other accessories like clothing, shoes and hair. It comes with two HUDs that allow changes to looks and movement. The AO has many preset animated gestures and even 12 animated grunts, giving him a limited dragon vocabulary. The #3 grunt sounds, unmistakably like HELLO. By clicking the AO off, he will follow  the regular AO or dance HUD and drop back to quad with a click of the mouse.

You may or may not see any Katzu stories in the Newser, but they will turn up at ShaAdventures.blogspot.com from time to time. A hint of his mission can be found in the fact that Katzu calls himself a Makara, rather than a Dragon.
Becky "Sha"  Shamen
Posted by Bixyl Shuftan at 6:00 AM