Changes in the FCA

The FCA, or Furry Club Alliance, has been undergoing some changes throughout the months of it's existence. Clubs and people have joined up, and clubs and people have dropped out. One club gone inactive, another taken down, and some dormant ones have come back to having events.

Created in 2011, the FCA offered an alliance for clubs where residents of any type of avatar, human, furred, neko, pony, and otherwise could come and enjoy themselves. They could coordinate schedules to avoid competing for limited audiences at the same time, and DJs could advertise their services to several clubs at once. When it started out, the FCA was mostly clubs belonging to or affiliated with Nydia Tungsten. Having gotten her start in Second Life as DJ "Naughty" Nydia, she eventually came to be involved with several clubs: the Club Zero Gravity space club and the Happy Vixen beach club in Purrfection, the Little Dove steampunk airship club  in Southern Colorado, the Castaway Cove pirate beach club in Kalmere Paradise, the historic landmark Club Fur in Kitsuhana, and in December 2012 came the Mardi Gras carnival club in FP Proteus.

Club Fur was inactive except for special events and as a hangout for most of 2012, but being in charge of four going to six clubs was still a logistical challenge in addition to needing help from some supporters. Castaway Cove was scheduled to be closed down in May 2012, but was rescued by Skylark Lefavre whom financed it for the remainder of the year.

Other clubs included Club Cutlass, which is owned by Jenni Greenfield and has been around the longest of the clubs, save Club Fur. Also in were the Raised Tail beach club and resort, which closed in 2011 but still has fans talking about it to this day, the Forest Howlers club which was active for several months in 2012 before closing down. There was the Cocktail Lounge which was also in Purrfection in addition to Zero Gravity and Happy Vixen, but was under a different owner. Later in the year, the club went inactive but continued to rent the land where it sat. Late in 2012, Club Euphoria joined the alliance. The Green Meadows "Xanadu" club owned by Perri Prinz was also in the alliance, but was inactive for most of 2012. 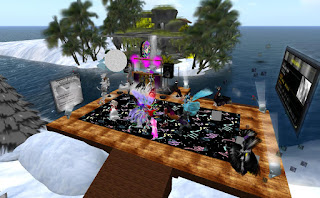 Beginning in December and going on in January, change was in the air. Besides opening Club Mardi Gras to appeal to humans as well as furs, she also planed to reopen Club Fur to regular events. DJ YuliaV Resident whom came back from hiatus about this time agreed to perform in both, and gave the carnival club a successful start and gave Club Fur a diverse crowd. Some pictures posted by her online gave the suggestion that some nights this oldest of furry clubs had a mostly human audience. At the Happy Vixen, Jasmine Dawn Shuftan took charge as manager, and reinvigorated the place with new DJs, and taking the party from the club to the open beach on occasion. Attendance began to blossom.

With six clubs under her influence, Nydia came to the conclusion they needed their own organization. So White Vixen Enterprises was formed, consisting of her clubs, and her KVXN radio station. 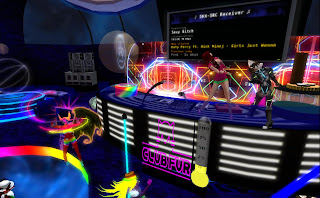 Three clubs departed from the alliance in recent weeks however.  Club Little Dove was in Southern Colorado due to a deal with the sim's owner. Eventually the deal fell apart, and Nydia took down the club in January. Perhaps it will find new life in a Steampunk community. Castaway Cove's future grew doubtful when Skylark informed everyone she could no longer finance the club from outside Second Life. In January, Nydia and several other White Vixen personnel met up to discuss its future. Skylark stated as much as she loved the club, she didn't want it up if it meant a high cost to everyone. And so the decision was made to no longer keep it running. The club was closed in early February. Club Euphoria did not really participate in FCA meetings, except for a dancer whom went on her own. In an FCA meeting in February, Club Euphoria was voted out in an unanimous decision. Club Mardi Gras was doing well, but eventually the estate owner made the decision to close down the land. So with nowhere to go, the club was closed for the time being. Nydia however resolved to have it reopened soon.

Although two of Nydia's clubs were closed down, the people working at them had others to go to. Perri Prinz was looking to reactivate Green Meadows, and in January it opened once again with the help of Kiticella whom had managed both Little Dove and Castawave Cove. Once again, the beloved disco club was having regular events. With Mardi Gras temporarily down, YuliaV was free to play more elsewhere. And she began playing regularly at the Happy Vixen, in addition to another night a week for Club Fur. It was at this time Club Fur changed hands. Alynna Vixen was the one who rescued the classic club when it's old home at Furnation Prime closed. When she had to take a break from Second Life, she turned the club over to Nydia. After Nydia got it running again, Alynna returned and Nydia transferred the club back to her. Under Alynna's hands, the club continued to do well.

White Vixen Enterprises was down to two active clubs: Club Zero Gravity and the Happy Vixen, plus it's radio station KVXN. But Nydia planned to change that. She looked for a new home for Club Mardi Gras, and soon found one. On Feb 18th, the club celebrated it's grand reopening with a crowd that was over 35 avatars at times, dancing to the tunes by YuliaV.  Nydia called it the most of any club under her, giving DJ Yulia the credit. 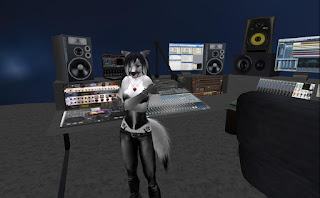 Nydia had other plans as well. In the upper section of Club Zero, she replaced the cuddle couch with "KVXN's new home," a virtual radio station, "any one wanting some air time can come DJ on air for me. When they do they can broadcast from here."

Numerous other individuals have been part of the FCA's clubs.  Hostess Miyuki Naidoo has tirelessly greeted residents dropping in to Club Zero Gravity for the past few years. Alexandra "Sexy Lexi" Tymets, Cynthia Farshore and Kryxia Silverfall were sometimes the only DJs who would take certain hours that tended to draw small crowds. Shockwave Yareach was a song parody singer in addition to being a DJ, and parodies of his such as "Boobie Man" drew chuckles from crowds. Plus many others have also been a part in keeping the clubs going as DJs and hostesses.

Over time, the FCA has seen a number of challenges and changes. It will continue to change as more clubs join, a place for clubs where all types of avatars are welcome.